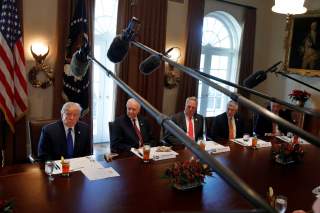 The Trump administration’s National Security Strategy was released this week, and it can readily be distinguished from many previous such strategy documents. Often, these have been bottom-up aggregations of policies, which were basically just stapled together and labeled a strategy, but were not actual conceptual frameworks or orderings of priorities. The administration deserves credit for undertaking this strategy process early on. In fact, it is the first serious top-down, government-wide strategy produced since the well-known Defense Policy Guidance produced by the Pentagon in 1992, after the end of the Cold War. While the guidance was not embraced as a national security strategy by the George H. W. Bush administration, many of its concepts did shape subsequent strategy documents and policies.

Now to substance, and here I would assess that the Trump strategy has several strengths. First, it is clear-eyed about world politics and about where we currently are as a country. In 1992, we were at a unipolar moment at the end of the Cold War, the United States was preeminent, and the issue was how to consolidate that preeminence, preclude the rise of a global rival, and prevent the domination of critical regions by hostile powers.

That brief unipolar era is over. In critical regions, China, Russia and Iran now present competitive challenges to the United States and its allies and partners. North Korea is on the verge of being able to threaten American population centers with nuclear weapons. Regional and global trends have made many regions unstable, producing streams of refugees that in turn have had major political impacts. Threats from non-state actors such as international terrorists, at times sponsored by hostile states, have grown.

We contributed to all these developments, at times recklessly disengaging, at other times rushing forward with inadequately thought-through plans or failing to take advantage of golden-hour opportunities presented by our actions, and still in other instances failing to preclude emerging threats in a timely manner. These mistakes crossed party lines and involved both the executive and legislative branches. As a result, the balance of power in key regions shifted toward adversarial powers.

Second, the just-published strategy document addresses the perpetual debate in the United States about whether its foreign policy should be guided by the national interest or by the country’s values and ideals. In the Trump doctrine, reflective of a nation that is questioning the wisdom of recent international ventures, the balance has shifted in favor of interests, but it does not abandon values; instead, it calls for “principled realism.” By this, it means a policy of still advancing values, but with greater prudence.

Third, the strategy recognizes the centrality of improving the underpinnings of U.S. power, especially its economic performance. This is very important, as the United States cannot sustain its relative power position in the world if the bases of its power atrophy. The United States faces the fiscal challenge of supporting social programs and defense and international affairs spending at a time when the national debt and annual deficits are already high. We will not be able to manage this challenge without higher rates of economic growth. Whether it will be possible to reach and sustain three or four percent growth—the president’s goal—remains to be seen. However, if we stay at two percent or less, the United States will likely be forced to choose between domestic social programs and the U.S. world role, which is not a desirable choice to face. The National Security Strategy focus on the U.S. economy is sound.

The same is true with the document’s call for restoring U.S. military overmatch against potential adversaries. The 1992 Defense Policy Guidance called for the United States to maintain a military capability that would discourage the rise of a peer competitor. National Security Adviser H. R. McMaster is often quoted as saying that, since the end of the Cold War, any time we entered a military conflict it was not a fair fight and that preserving this overmatch must be a key security goal.

The diffusion of military technologies, particularly those of the precision-guidance revolution, means U.S. rivals are leveling the playing field. Sequestration, as well as congressional inability to pass regular appropriations bills, has badly undermined readiness and modernization. It will take perhaps a decade to repair the damage, and it’s high time to make a start.

Fourth, the document puts forward a sensible formula for relations with other great powers: counter disruptive actions, deter conflict and cooperate in areas of common interest. This recognizes that the purposes and goals of China and Russia are at odds with our own, but it also acknowledges that it is better to avoid conflict and that our interests are aligned on some important issues.

A sophisticated policy toward an adversarial power ought always to involve a mix of engagement and containment, or what I previously have termed “congagement.” The document rightly recognizes the importance of creating a favorable balance of power in critical regions to address the potential threat from competing powers. Conceptualizing the Indo-Pacific region as a geopolitical entity and strengthening ties with a rising India are smart policies.

Fifth, the new National Security Strategy is refreshingly blunt on some key regional issues. For example, it clearly calls out the destabilizing role that Pakistan has played in prolonging and complicating the Afghanistan conflict, by protecting, arming, and supporting the Taliban and other insurgents. Previous administrations allowed the Pakistani military to play a double game, receiving U.S. aid while undercutting U.S. efforts. This document should put them on notice that the United States what they are doing and are not willing to let it continue.

Sixth, the strategy points to the need for institutional change. From my personal experience as an ambassador in conflict zones, I can testify that our departments and agencies are not structured, staffed and integrated the way they should be to succeed in the missions assigned to them. The strategy document repeatedly emphasizes the need to renew and reform our policy instruments. It highlights the need for creating a more competitive diplomacy to advocate for U.S. interests.

Seventh, the Trump administration assigns the appropriate weight to information and data as a crucial new domain of competition. These new tools can affect competition through cyber offense and defense embedded in wider military operations. They shape economic competitiveness through theft of intellectual property and relative performance of firms by improving their productivity and efficiency. They have brought entirely new concerns and potential deformations to political contests through, for example, the weighting of messages in social media. There is also competition over who sets the rules that govern the structures and operations of the internet. The document’s identification of the importance of this issue accurately recognizes the new challenge before the United States.

At the same time, there are some elements of the strategy that may need to be revisited over time. It is gratifying, in light of the rhetoric of the campaign, that the president now embraces U.S. alliances and partnerships, though he—correctly—calls on the country’s partners to carry an equitable share of the burden of common defense. It remains to be seen whether, and in what form, he will preserve the idea of a community of democracies. The nature of regimes affects their behavior and reliability, a point that should not be lost to excessive pragmatism.

As a member of the board of the National Endowment of Democracy, I was struck at the demotion of democracy promotion in the document. Unsurprisingly, given the president’s views of the wars in Iraq and Libya, regime change is out for now. Challenging authoritarian regimes about their treatment of their own people also seems to be a lesser priority, though the president has spoken forcefully about the situation in Venezuela, and the document does tout the need to provide the world with an inspirational example and to collaborate with like-minded aspiring states.

As a country, we need an informed discussion about the means and limits of ideological influence and democracy expansion. We certainly don’t want to abandon those goals, but it is important to conduct a lessons-learned analysis based on our experiences that looks at whether we have been appropriately organized to carry out democracy promotion in the broader Middle East. Abandoning the effort altogether would not be right.

But with all of these positives, the bad news is that the hard part still lies ahead. A strategy is just a piece of paper until it is operationalized in policies, funded in the budget, and implemented on the ground. Reforming departments and agencies is even more challenging. Recently, the U.S. record in this part of the process has been spotty.

And, while the Trump administration has set its course in some areas, such as the strategy for Central and South Asia, it has a great deal of work to do in other areas, such as cybersecurity and funding a full restoration of U.S. military power. It knows where it’s going, but it still needs to roll out on many lines of action. The National Security Strategy gives us a baseline to judge the administration’s performance going forward. Let us hope that the administration will deliver, as the president likes to say, ahead of schedule and under budget.