Trump and His Allies Are Ready to Sabotage the Iran Deal 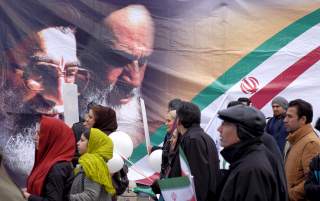 President Donald Trump has punted the fate of the Iran nuclear deal to Congress, vowing to terminate the multilateral accord by mid-May if his unrealistic demands are not met. By issuing ultimatums from the White House while outsourcing the work to Congress, Trump has set up a process that can seemingly only fail. The United States cannot simply legislate new demands to an international agreement and the current Congress lacks the political wherewithal to approach the matter seriously. One need look no further to back up this claim than the first Iran bill in line with Trump’s demands, offered by Reps. Peter Roskam and Liz Cheney and backed by the hub of Iran nuclear deal opposition at the Foundation for Defense of Democracies. It is such an unrealistic piece of legislation that the only rational way to explain it is as part of a broader approach to ensure the termination of the deal.

The fact that Trump is in the White House should not give a free pass to such recklessness, particularly when it has to do with war and peace and nonproliferation in the Middle East. Serious legislators and policymakers must step up to warn against the path that Trump and his lackeys in Congress are leading us down, while taking what actions are available to try to preserve the accord.

Far from altering the deal, the Roskam-Cheney bill would force the United States to materially breach the agreement, also known as the Joint Comprehensive Plan of Action (JCPOA). It does so by mandating a series of certifications every ninety days on activities beyond the scope of the JCPOA to forestall the snapback of nuclear sanctions, a move that would kill the deal.

The bill would reimpose the sanctions that the United States committed to lift under the JCPOA in ninety days if Iran does not ratify the IAEA Additional Protocol in that time, a step that is not required by the deal until October 2023. Sanctions would also snap back if Iran ever moves above 130 tons of heavy water, which is not strictly limited by the JCPOA and is far less important than other areas of the agreement, such as inspections and enrichment. Moreover, if Iran undertakes any launches utilizing ballistic missile technology—an area outside the JCPOA—the legislation would snapback sanctions. Given Iran’s frequent rhetoric ruling out inspections of military sites, a position that has been bent in practice, it is also far from clear that Trump would certify that Iran has not “denied . . . anywhere, anytime” inspections as mandated by the bill.

The inclusion of these certifications would sacrifice the tangible protections of the JCPOA in the misguided hopes of achieving negligible gains. In lieu of Iran’s obligated ratification of the Additional Protocol in 2023, Roskam and Cheney would collapse the agreement and ensure the Additional Protocol is never ratified. Instead of suggested guidelines on Iranian heavy water that have been largely adhered to under the JCPOA, the United States would put at risk firm limits on enrichment that have distanced Iran from a nuclear weapon. In tying the accord’s fate to conventional missile testing, the bill would enable Iran to move closer to fitting their missiles with nuclear warheads. And, rather than be content with an established mechanism to ensure IAEA inspection of nuclear facilities and any suspicious facility in Iran—including military sites—it would sacrifice “the world’s most robust nuclear verification regime,” according to IAEA Director-General Yukiya Amano, on the basis of little more than right-wing conspiracy theories.

While the Roskam-Cheney bill includes additional poison pills, including certifications that would seek to lock in Iran’s current enrichment restrictions indefinitely and sanctions designed to nullify Iran’s benefits under the accord, any one of the above certifications would sabotage the JCPOA. While the bill’s proponents care little for the United States upholding its own obligations under the JCPOA, they should. If the deal collapses, the odds of an Iranian nuclear weapon and war with Iran will dramatically increase, while the United States will be isolated from our allies in Europe and other negotiating parties—like Russia and China—that would be key to enforcing continued sanctions against Iran or any negotiation over North Korea’s advancing nuclear weapons arsenal.

Rather than go along with Trump’s charade on the JCPOA, responsible legislators need to take the wheel. First, they should block any legislation, like that proposed by Roskam and Cheney, that would force the United States into material breach of the accord. Second, they should point to the president’s lack of good faith and disastrous threats to sabotage the accord as justifications for removing the president’s scheduled decision points on the JCPOA, which have been set into place in both Iran sanctions bills and the Iran Nuclear Agreement Review Act. Failure to do so will ensure that the deal is scheduled for potential termination every few months, a status quo that is at odds with U.S. commitments to implement the deal in good faith and abstain from any action that would adversely affect the normalization of Iran’s economic activities.

There is little reason to budge from these demands. While opponents of the JCPOA will point to Trump’s threats to kill the deal in an attempt to compel passage of legislative sabotage, there is no reason for responsible legislators to hop aboard the sinking ship that is Trump’s Iran policy. After all, they would only end up sharing the blame for the agreement’s collapse with Trump and his congressional cheerleaders.

Ryan Costello is the Assistant Policy Director at the National Iranian American Council.