The Trump Impeachment Debacle Has Exposed Cracks in the GOP 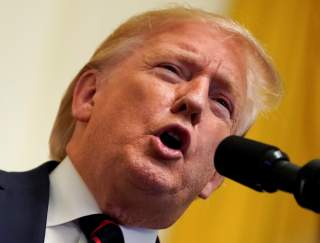 Following the recent testimony of acting Director of National Intelligence Joseph Maguire, House Democrats believe they have a roadmap for impeachment proceedings and are increasingly unified. Whether President Donald Trump should be removed from office, however, is exposing cracks in the GOP.

Two-thirds of Democratic Party voters have consistently favored impeaching Trump. Some of them have attached their impeachment desires to disproven accusations of collusion with the Russian government. Others have focused on accusations of obstruction of justice. Now, there’s the infamous phone call with the president of Ukraine, which some people have described as an abuse of power. Speaker of the House Nancy Pelosi has resisted multiple call for impeachment over the past few years, to the consternation of her more progressive colleagues. She finally called for an official impeachment inquiry on Tuesday.

“There is a heightened leftist component of the Democratic Party that she was feeling pressure from,” said Democratic Governor of New York Andrew Cuomo. “It’s a long and unproductive road . . . Where does it go ultimately? Nowhere.”

Twelve candidates have qualified for next month’s Democratic presidential primary debate. Out of the candidates, only one, Rep. Tulsi Gabbard (D-Hawaii), has been opposed to impeaching Trump until recently. “This is the problem, and this is why I feel strongly that this is not the route that we should take. It politicizes something that really the American people need to be trusted to decide: who they would like to see as our president and our commander-in-chief,” Gabbard said. She is one of only fifteen House Democrats who did not endorsed impeaching Trump—until Friday. Now, Gabbard has reversed course. She said it would set a “dangerous precedent” not to proceed.

To no one’s surprise, ex-Republicans and primary opponents of the president have all endorsed impeachment. Rep. Justin Amash (I-MI), a libertarian-friendly politician who left the GOP in theatrical fashion over the summer, is the only non-Democrat House member to support impeachment. Republican primary candidates Joe Walsh, a former Illinois congressman, and Bill Weld, a former Massachusetts governor, have both endorsed impeachment. Weld has gone so far as to threaten the death penalty.

But even some current Republican office holders have turned up their noses at defending Trump (most not for the first time). Sen. Mitt Romney (R-UT) called the call “deeply troubling” earlier this week. And now two Republican governors, Phil Scott of Vermont and Charlie Baker of Massachusetts, have given their support to Pelosi’s impeachment inquiry.

“It’s not surprising that the governors of Vermont and Massachusetts are open to an investigation. They may be Republicans, but their states are blue. The noises that Romney and Sasse have made are no surprise either. They get off on being Republicans who get better press than other Republicans,” said Daniel McCarthy, editor of Modern Age.

“Trump suffers from the fact that there remain a number of Republican elected officials who are privately not comfortable with him and benefit from his popularity with the Republican base,” said James Antle, editor of The American Conservative. “He can afford to have blue state Republicans like Charlie Baker opposing him on this. He can also probably afford to have Mitt Romney off the reservation. It’s as likely Romney will irritate other Republicans as lead a successful movement against Trump. What he can't afford is to begin to lose people like Marco Rubio and other GOP senators who might prefer Mike Pence as president.”

“The party’s voters, however, not only don’t want to impeach Trump, they’d rather impeach any Republican who supports impeachment,” continued McCarthy. “Trump’s enemies have overstated their case and overplayed their hand a dozen times before, and this time isn’t any different. None of the attacks on Trump have seriously dented his support within the party, and they certainly haven’t revived any interest in a Romney-style Republican alternative.”

Trump’s approval numbers have remained above average the past week. An NPR-Marist poll taken Wednesday, days after the start of the Ukraine controversy, gave Trump an approval rating of forty-five percent among registered voters, and ninety percent among Republicans. An Emerson poll from last week had Trump’s approval at 48 percent.

Regarding impeachment, the NPR-Marist poll found forty-nine percent of registered voters supported the impeachment inquiry, while 48 percent opposed it, a statistical tie. Meanwhile, 88 percent of Democrats, 6 percent of Republicans, and only 44 percent of independents favor the inquiry.

A poll by YouGov taken this week resulted in an outlier, primarily because of the wording of the question. Asked a hypothetical scenario, “If President Donald Trump suspended military aid to Ukraine in order to incentivize the country’s officials to investigate his political rival Joe Biden, and his son,” would they support impeachment, fifty-five percent of respondents said yes. This included seventy-six percent of Democrats, fifty-one percent of independents, and a whopping thirty-two percent of Republicans.

The majority of both parties support their respective sides on impeachment, with the only real disagreements appearing among individual, elected officials. As the fight over the Trump presidency continues, this could lead to a small realignment in American politics. “Anti-Trump Republicans are on their way out of politics or into the Democratic Party, whether they know it yet or not,” concluded McCarthy.