The Trump-Kim Summit in Hanoi: How America Can Make History 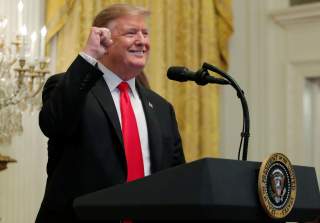 For most of their terms in office, Americans Presidents live in a world filled with more hostility than admiration and more abuse than appreciation. However, few, if any presidents have confronted the opposition to change in any form that President Donald Trump encountered. Trump’s controversial reset of American Foreign Policy in Northeast Asia elicited almost universal contempt.

Trump’s detractors inside the beltway insisted that the President had no good military option vis-a-vis North Korea to force it to denuclearize. According to the experts, the only outcome would be a war on the Peninsula that would leave a million Koreans and many, many thousands of Americans and other expatriates dead.

Inside any bureaucracy, civilian or military there is inevitably a sterile infatuation with fixed, inert ideas. But nowhere in American society is there a greater tendency to ignore new facts, especially when they are incongruent with conventional wisdom, than in Washington, DC.

Predictably, Trump’s predecessors viewed North Korea in the static context of the Cold War. It did not occur to them that a weak country—plagued with chronic famine, with fewer than 3 percent of its roads paved, and a gross national product behind Ethiopia—might not live up to the inflated threat picture provided by Washington’s notoriously inaccurate intelligence estimates.

Trump saw things differently. Instead of meekly accepting the intelligence assessments and the testimony of experts, Trump set out to solve the North Korea problem. He began by meeting early in Mara Lago, Florida with President Xi of China and raised the subject of North Korea in private discussion. Trump did not hesitate to express his aversion to the North Korean regime, but he also Trump consistently demonstrated his respect for China and its national security interests.

The outcome of Trump’s meetings with Xi was an understanding that provided the foundation for Beijing’s support to the President in the difficult months leading up to the Singapore Summit. Trump decided that American military power should be an instrument of statecraft, not its determinant. In a statement that the New York Times regarded as a departure from the firm, but measured language of his predecessors, in his first address to the United Nations Trump said, “The United States has great strength and patience, but if it is forced to defend itself or its allies, we will have no choice but to totally destroy North Korea.”

Trump and North Korean leader Kim Jong-un are now set to meet in Hanoi, Vietnam, on February 27 and 28 to build on an agreement they reached during their first summit to pursue complete denuclearization of the Korean Peninsula. How far North Korea will commit to dismantling its nuclear weapons and ballistic missile program is yet to be clarified, but Kim has described the process as irreversible.

In a propaganda shift that is nothing short of titanic in its implications, Kim told his people, “The road to peace is hard and sometimes accompanied by great sacrifices,” the state article stated. “We cannot rest just because the road ahead is too long, and we can’t turn around or retreat just because of trials and obstacles blocking it.”

Kim’s statement which mentioned the word “peace” more than seventy times was published just two weeks before the scheduled summit in Hanoi, Vietnam. Given Kim’s unspoken fear that North Korean society in its Stalinist form is unlikely to survive contact with the free and open society of South Korea, Kim’s statement is far more than a modest gesture.

However, for Kim and South Korean President Moon Jae-in to move decisively forward, a treaty that formally ends the war on the peninsula must be signed. Moon has intimated in the past that Beijing and Pyongyang will not commit to total denuclearization of the Peninsula without a clear renunciation of the use of force to compel regime change. With the peace treaty in place, North Korea will allow the International Atomic Energy Agency (IAEA) to inspect its nuclear, uranium and plutonium enrichment facilities setting the stage for the denuclearization that Washington, Beijing, Seoul, and Pyongyang desire.

Trump’s break with the Cold War past is paying handsome dividends for peace on the Korean Peninsula. It’s vital that the President set the conditions for this event in Hanoi. For Asia, a region of the world that endured long periods of war and destruction after the Japanese invaded China in 1937, the signing of a peace treaty ending the Korean War by all of the participants in that tragic conflict would constitute a turning point in human history as important to world civilization as the collapse of Soviet power in Eastern Europe.

As Margaret Thatcher once told President George Herbert Walker Bush, “This is no time to dither.” Trump must seize the moment in Hanoi for the demilitarization of America’s relations with Asia in general, and more specifically, with China and Korea. It is precisely the constructive relationship Trump sought with China, and for that matter, with all nations during his run for the Presidency.

Colonel (ret) Douglas Macgregor is a combat veteran, a PhD and the author of five books. His latest is Margin of Victory, (Naval Institute Press, 2016).