Trump Leaves the Door Open for Another North Korea Summit 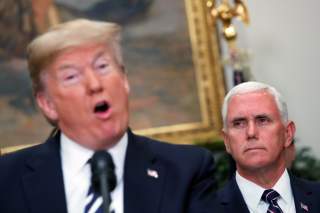 The Trump administration’s announcement that they will postpone the Singapore summit with North Korean leader Kim Jong Un signaled that they are committed to a good deal for the United States, or no deal at all. Trump’s letter to Kim made it clear that he was disappointed by North Korea’s recent actions and words—including Pyongyang’s earlier promise to allow experts to gather forensic evidence at today’s demolition of the Punggye-ri nuclear test site.

Driving President Trump to the brink were recent comments from North Korean Vice Foreign Minister Choe Son-hui, a long-time U.S. interlocutor who claimed that, “Whether the U.S. will meet us at a meeting room or encounter us at nuclear-to-nuclear showdown is entirely dependent upon the decision and behavior of the United States.” Her statement also cited Vice President Pence and National Security Advisor Bolton’s recent comments on the Libya model as drivers for North Korea’s recent uptick in sharp rhetoric.

However, critics mistake symptoms for underlying causes when they blame Ambassador Bolton or Vice President Pence for their references to the “Libya model” of denuclearization. Secretary Pompeo’s testimony that the North Koreans were unwilling to engage in serious preparations reinforces the argument that the North Koreans themselves were not yet ready to discuss the future of their nuclear program.

Furthermore, North Korea’s recent actions lay bare Kim’s long-standing intention to retain his arsenal while removing sanctions, and pursuing economic investment and normalization. Perhaps Kim was always willing to walk away from what he considered a bad deal—namely, one that would require complete and real denuclearization. Pyongyang’s actions are manifestations of the two side’s disparate negotiating positions. This is very different from claiming that North Korea’s actions are the main reason for the postponement of top-level talks.

Beginning with North Korea’s recent attacks on routine U.S.-South Korean military exercises, North Korea chose to engage in a risky form of rhetorical brinkmanship to solidify an optimal opening position at the summit. What Kim Jong Un did not anticipate is that the President remained more committed to his long-stated goal of complete, verifiable, and irreversible denuclearization (CVID) than in just meeting Kim himself.

Today’s decision is also driven by the President’s unique negotiating style and his interpersonal approach to foreign policy decisions. Trump remains committed to a style of negotiation that makes large demands in the hope of striking a better deal unimaginable by conventional foreign policy thinkers.

The White House has hinted several times that it could accept substantial denuclearization within the coming year as sufficient grounds to close a deal. These steps would have to be verifiable and part of an eventual CVID. However, given the myriad technical challenges associated with CVID, the administration knows that dismantling core parts of North Korea’s nuclear program would be preferable to no deal at all.

While the prospect for immediate diplomacy remains unlikely, Trump did leave Kim with space to maneuver and salvage the situation. The President’s letter, included overtures to a possible future meeting and acknowledged that only dialogue between Kim and himself truly mattered. His letter informing Kim that the June 12 date is off allowed the President to keep his word and put the ball back in Kim’s court. In other words, Trump just told Kim “call me when you are serious.”

In short, the United States remains open to a good deal, but President Trump has made it clear he would be willing to walk away from anything that risked the safety of the American people and our allies South Korea and Japan. This minimizes the risk that the President would feel domestic political pressure to accept a dreadful deal on the spot in Singapore.

So what’s next? Expect a return to the maximum pressure campaign, probably in the form of economic sanctions and secondary sanctions on China if they refuse to enforce the U.N. Security Council Resolutions. Meanwhile, North Korea may resume missile testing and even be so brazen as to take more Americans prisoner. But back-channel talks will continue and if Kim shows more seriousness—such as a willingness to disclose his nuclear inventory and invite international experts to verify dismantlement steps anytime and anywhere—then the U.S. would likely be willing to reschedule the summit. But it won’t be on June 12 in Singapore.

Patrick M. Cronin is Senior Director of the Asia-Pacific Security Program at the Center for a New American Security (CNAS)

Abigail C. Grace is Research Associate with the Asia-Pacific Security Program at the Center for a New American Security (CNAS).