Is Trump-lite a Winning Formula for the GOP? 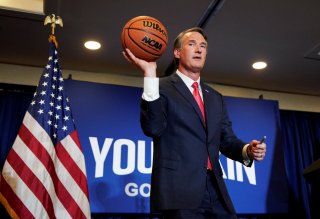 America remains a center-right country. That’s the big lesson of last night’s election. And it’s one that Democrats ignore at their peril.

Democrats had become complacent about their previous electoral wins. This year, they once more tried to run against Donald Trump. He’s become their favorite opponent. He singlehandedly helped them win, in succession, the House, the Senate, and the presidency. But Trump’s banishment from Twitter turns out to have been a blessing in disguise for the GOP. Also helpful was the psychodrama taking place on Capitol Hill, where Democrats have been flaying each other over their infrastructure and social spending plans.

The fact that Jack Ciattarelli is leading Phil Murphy in New Jersey should be even more alarming to Democrats than Virginia. Ciattarelli ran on schools, taxes, and the economy while keeping Trump at arms-length. The same recipe worked in Virginia. Terry McAuliffe was a Clinton mini-me who warned about Glenn Youngkin’s ties to Trump. But his attempts to depict Youngkin as a wolf in fleece’s clothing flopped.

Youngkin ran an effective campaign, distancing himself from Trump but hammering home the message that critical race theory (CRT) is a menace. The riposte of Democrats that CRT isn’t taught in the schools cut no ice with voters. Put bluntly, CRT is a broader term for the woke politics and cancel culture that have become de rigueur on the Left. For now, Democrats are saddled with the lunacy that periodically manifests itself in schools and colleges. President Joe Biden may need a Sister Souljah moment.

But while the GOP won, it’s not as clear that Trump did. The Youngkin victory suggests that Trump-lite can succeed. But the real thing may be too stark for independent voters to swallow. Youngkin himself has overnight emerged as a credible candidate for the 2024 presidential primary in contrast to warmed-over politicians such as Sen. Marco Rubio (R-FL) or Mike Pompeo. Youngkin is not a professional politician. He will be seen as new, fresh, exciting. And, by the way, a proven winner.

The path forward for the GOP is clear. It will be emboldened in its focus on the culture war. The Democrats are already on the defensive.

But the best defense is often a good offense. Whether Biden will—or can—adopt it is an open question. His fate will be sealed by the current maneuvering on Capitol Hill. If the Democrats fail to pass an infrastructure bill, let alone more social programs, the shellacking they suffered last night will look tame by comparison.