Trump May Have Given North Korea a Warning. Did Pyongyang Hear It? 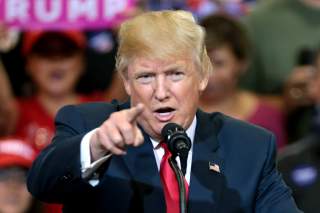 Whenever North Korea conducts a missile launch or other military action, Korea-watchers debate whether it was done to signal Washington or simply to exercise a military capability or test a new technology.

President Donald Trump’s retaliatory attack on the Syrian air base prompted similar debate. Trump changed course from his previous warnings against risking U.S. involvement in the Syrian imbroglio after seeing the heart-rending videos of incapacitated children.

Was the U.S. military action a one-off punishment for the regime’s vile attack on civilians, the beginning of an attempt at Syrian regime change, or a broader Trump initiative to “prevent and deter the spread and use of deadly chemical weapons?” We simply don’t know at this point.

But surely the attack sent a message to other countries that ignore the UN Security Council. Secretary of State Rex Tillerson declared that the attack was a warning to other nations, including North Korea, that “a response is likely” once any nation poses a threat.

But what signal is unclear. Was Trump signaling that he would take strong unilateral action—though not necessarily military—against Pyongyang’s prohibited nuclear and missile programs rather than endlessly dithering as President Obama had?

Trump’s vow to act unilaterally to “solve” North Korea—“if China is not going to solve North Korea, we will”—could portend abandoning Obama’s timid incrementalism. The former president’s policy was to sanction a few additional North Korean entities after each provocation from Pyongyang, while overlooking Chinese violators.

Or was Trump warning North Korea that he was willing to conduct a military attack to prevent the regime from completing its ICBM program which would put the United States at risk of nuclear attack? Earlier this year, the Trump administration declared that “the president of the United States will stand between them and missile capabilities.”

A senior White House official ominously warned that “the clock has now run out and all options are on the table” for dealing with North Korea’s nuclear and missile programs. After the U.S.-China summit, Secretary Tillerson commented that “President Xi clearly understands, and I think agrees, that the situation has intensified and has reached a certain level of threat that action has to be taken.”

National Security Advisor H. R. McMaster went further, stating that a nuclear-capable North Korea “is unacceptable [and] so, the president has asked us to be prepared to give him a full range of options to remove that threat to the American people and to our allies and partners in the region.” The redeployment of an aircraft carrier group back to the Korean Peninsula heightened speculation that the United States was preparing to attack North Korean missile-related sites.

The problem with signals is that they’re not very good if they are ambiguous, subject to misinterpretation, or ignored. If Trump was hoping to intimidate North Korea, it was unsuccessful. Pyongyang responded to the U.S. attack by declaring, “What happened in Syria once again taught a bitter lesson that . . . one can defend oneself from the imperialist aggression only when one has one’s strength [and] it proves a million times over that our decision to strengthen our nuclear deterrence has been the right choice.”

North Korea has repeatedly vowed never to abandon its nuclear weapons, lest it leave itself vulnerable to U.S. attack. Kim Jong-un declared in 2013, “We should never forget the lesson taught by the Balkan Peninsula and the Middle East region [Iraq], which did not acquire powerful national defense capabilities . . . ended up as a victim of aggression in the end.”

North Korea is Not Syria.

Trump enforced Obama’s 2012 redline by attacking a Syrian target responsible for chemical-weapons attacks on civilians. But has Trump now drawn his own redline against North Korea developing an ICBM? The White House warned that President Trump has put North Korea “clearly on notice” and may take “decisive and proportional” action as seen in the air strikes on Syria.

While Bashar al-Assad’s regime poses a dire threat to its own citizens, it is not a significant threat to its neighbors. North Korea, however, is capable of a substantial military reprisal against South Korea and Japan using nuclear, chemical, biological and conventional weapons, jeopardizing millions of citizens. A U.S. attack against production or test facilities of North Korea’s nuclear or missile programs could trigger an all-out war with a nuclear-armed North Korea causing hundreds of thousands of casualties.

Each side could misinterpret the other’s intentions, thus fueling tension, intensifying a perceived need to escalate, and raising the risk of miscalculation, including preemptive attack. Trump’s threats could exacerbate the situation or lead to perceptions of the United States as a paper tiger. The uncertainty of U.S. actions, tensions on the Korean Peninsula, and the consequences of such military action are high...and rising.

Bruce Klingner is the senior research fellow for Northeast Asia in The Heritage Foundation’s Asian Studies Center. He previously served twenty years in the U.S. Intelligence Community including as CIA’s Deputy Division Chief for Korea.