Trump Must Avoid a False Start with Russia 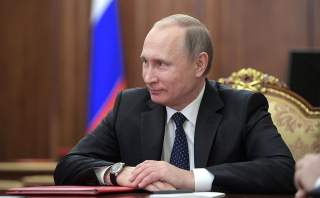 President Trump has made clear his determination to pursue better relations with Russia. It’s an attractive idea, but not a new one either. Can Trump succeed where his two predecessors tried and failed? There is a chance he might.

The two countries may share common interests across a range of security issues, and Russia’s cooperation in dealing with some of the globe’s current challenges would indeed be welcome. But a constructive relationship with Moscow will require more than a good personal relationship between Trump and Putin, and more than their shared nationalist and realist perspectives.

Engagement and cooperation with Russia also involve risks, including that it may end in failure and encouraging increased Russian aggressiveness. But the risks can be managed and prospects for success can improve if Trump engages Russia from a position of strength, and if Washington begins with the three areas where deals are most feasible: Islamic terrorism, Europe and arms control.

Dealing from a position of strength means that engagement with Moscow must be sequenced prudently. To ensure that outreach to Russia does not undermine alliance cohesion, President Trump should first meet with European allies, who are nervous about his statements on NATO, the European Union and Russia, and more skeptical than he about the chances of rapprochement with Moscow.

European concerns provide an opportunity for Washington to secure long-needed European commitments for building up military forces and acquisition programs tailored to current and future threats, including cooperation to strengthen their defenses against possible Russian cyber attack affecting the upcoming elections in Germany, Italy and France. The Trump administration should also start implementing its program for enhancing U.S. defense capabilities designed to counter vulnerabilities in the conventional, cyber and nuclear domains in parallel with engaging Russia.

Trump’s negotiating skills will be put to the test from the very start of this process, because to succeed, this will need to produce significant concessions by Putin. This is essential to reassure Congress, where strong bipartisan anti-Putin sentiment prevails, because of Russia’s cyberattacks; indiscriminate bombing by the Russian air force in Syria, and hostile policies across multiple regions, will otherwise limit the new president’s ability to use sanctions relief. Congress, in fact, is poised to pass legislation to impose additional sanctions. Russia can do its part by pulling back forces from eastern Ukraine and persuading proxies in Ukraine to accept an enduring ceasefire, easing its pressures against the Baltic states and the rest of Europe.

The Trump administration would then be in a much better position to pursue a broader cooperative agenda along three lines.

First, U.S. and Russian interests align most closely on the Islamist terror threat, notably from ISIS. A joint campaign plan to destroy the Islamic State in Syria would be a strong beginning, and could conceivably lead to agreement on next steps in Syria. Washington and Moscow could broker a deal in which the regime continues to rule in areas it currently controls, and confederal-type units are established in areas held by the opposition forces, until a longer-term political solution can be found in which Assad’s fate is determined.

Second, it is certainly conceivable for Washington, in coordination with allies, to help Kiev and Moscow reach an agreement that respects both Russia’s legitimate interests and Ukrainian independence. Recent history provides several precedents for Ukraine to follow. It could, in theory, join NATO. More practically, in the short term, it could opt for complete neutrality as Austria did during and after the Cold War. Like Sweden, Ukraine could choose to remain neutral and build strong ties with NATO. Or Ukraine, like Finland, could remain completely neutral and then become a NATO partner at an appropriate time. Trump should insist on measures protecting Ukrainian independence and sovereignty. Crimea, meanwhile, could be treated as were the Baltic states during the Cold War; without recognizing Crimea as part of Russia, Washington could nonetheless carry on normal dealings with Russia.

Arms control presents a third opportunity for possible agreement. Russia and the United States share a common interest on nonproliferation with regards to Iran, North Korea and even China. President Trump has expressed a desire to reduce the number of nuclear weapons held by the United States and Russia. Specific proposals will need to be developed by the new administration. But, in almost any scenario, Russia is likely to voice concerns about U.S. missile defense systems. Despite assurances by the United States that missile defense systems in Europe are designed to counter threats from Iran, Moscow believes that they diminish Russia’s strategic nuclear deterrent. The United States should explore whether there are ways to allay Russian concerns without compromising the ability to defend against Iranian missiles, as part of an overall nuclear arms control agreement.

The record of failed attempts in achieving a U.S.-Russia grand bargain is of concern, and should be analyzed for lessons learned. But both sides have an interest in making it work. Russia needs a better relationship with the West to improve its economy, while adversarial relations with Russia are depriving the United States of a potentially valuable partner in the Middle East and in the fight against terrorism, as well as consuming resources needed to hedge against a rising China, in which Russia also has a stake.

President Trump should test the proposition that U.S.-Russia relations can be improved to the benefit of both nations. There is a chance he will succeed. Unlike his two predecessors, he appears disinclined to promote domestic change in Russia or to favor immediate further NATO expansion. These two adjustments in U.S. policy would likely lead to a favorable reaction by Putin. Nevertheless, the recent state of relations between the two countries necessitates that he do so on a foundation of rebuilding U.S. strength and deterrence.

Zalmay Khalilzad was the U.S. Ambassador to the United Nations during the George W. Bush administration.

Image: Vladimir Putin at a meeting on January 12, 2017. Wikimedia Commons/Kremlin.ru