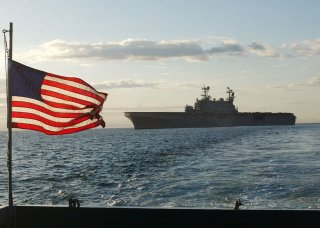 The Trump administration’s new budget proposal seeks a $54 billion boost to defense spending, much of which would go to the United States’ military presence in Asia.

The president’s Asia advisors, composed primarily of China hawks, have reinforced a do-or-die mentality regarding the rising superpower. Donald Trump’s chief strategist, Steve Bannon, stated in a radio show last year he believes the United States and China will go to war in the next decade. Trump’s Asia advisors, Peter Navarro and Alexander Gray, advocated in a recent piece a policy of “peace through strength,” calling to expand the U.S. Navy to 350 ships. In his Senate confirmation hearing, Secretary of State Rex Tillerson suggested implementing a blockade to prevent Chinese access to its man-made islands in the South China Sea.

Realist international relations scholars like John Mearsheimer and Robert Kagan affirm the United States and China are drifting closer to a destructive confrontation. This is because the ability and willingness of China to reshape the international order are increasing, just as the United States’ capacity to preserve the status quo is declining.

Of course, in our current era of globalization, economic interdependence will hinder any conflict between China and the United States from going “hot.” It is the interest of both countries to avoid war, which would entail catastrophic costs to both sides and could easily be the largest war in world history. Top decisionmakers on both sides know this. The Chinese foreign minister, for instance, recently stated that “there cannot be conflict between China and the United States because both will lose, and both sides cannot afford that.”

But even if there is no hard conflict, China and the United States appear to be headed towards a Cold War-type détente in which other countries are forced to take sides. As Malaysia and the Philippines line up to strike deals with Beijing, there has already been a fair amount of hand-wringing in Washington, DC that the United States is “losing” its allies in Southeast Asia. These concerns have grown since Trump scrapped the Trans-Pacific Partnership, thereby “opening up a door” for China to expand its influence in Southeast Asia. And lest one forget, proxy conflicts in Cold Wars are not necessarily minor—recall the Vietnam War.

What, then, is the solution? How do China and the United States avoid escalating toward war?

A Strategy for Success

For better or for worse, the challenge of extricating the United States from this twenty-first-century security dilemma falls to President Trump. He must make a change in course now, and he has the power to do so.

If Trump is to implement a successful strategy, it must align with his “America first” worldview, which brought him to power and underlies his policies. This means that policy in Asia must be committed to defending America’s national interests, which Trump and his supporters feel are threatened.

Another fundamental requirement that Trump must blend into his strategy is an acceptance of today’s balance of power: he and his advisers must realize that China is becoming the most influential power in Asia. This may be a difficult pill to swallow, but it is impossible to form an effective strategy without coming to an acceptance of this basic fact.

As the Chinese economy continues to grow—despite the recent slowdown—the country will continue to gain influence. Militarily, China’s economic prowess has translated into expanding capabilities. It now has one operational aircraft carrier and will soon have another. China is tilting the balance of power in the Pacific and may already be able to counter the American military on its periphery. Like the United States in the Western Hemisphere, China is a resident power in Asia, and it will always have more vital interests there than the United States.

Keeping these issues in mind—incorporating America First policy and recognizing China’s ascent—Trump should make two major adjustments to Asian foreign policy that break from the past decade: emphasize economic over military engagement, and concentrate on core alliances rather than expand security partnerships.

At first glance, making engagement less military in Asia seems like it would harm the ability of the United States to project a military presence in the region. This would certainly be a criticism from the hawks in Trump’s foreign-policy circle. Deepening economic ties; however, would strengthen Washington’s ability to project military power. Washington’s longtime alliances with Tokyo and Seoul best exemplify this reality. In the twentieth century, the United States underwrote Japan and South Korea’s security. As Japan and South Korea prospered under the U.S. security umbrella, they deepened trading ties with Washington. The two countries are now the fourth and sixth largest trading partners of the United States. Together, they host roughly eighty thousand American troops. Thus, economic and military ties reinforced each other, and they have advantaged the United States’ ability to project power in Asia.

In terms of how to go about forging economic ties, Trump has already shown he favors bilateral economic agreements, which allow the United States to determine on a case-by-case basis what gains it derives from economic partnerships.

Trade with Asia directly benefits the American economy, and the region will remain vital to the United States’ economic competitiveness. Trading investment for cheap, manufactured products would be one obvious starting point for cooperation with less developed Asian economies. Such bilateral agreements would align with “America first” by strengthening the American economy. They would also allow Americans to consume overseas products more easily while making returns on foreign investments.

The second way Trump must change foreign policy in Asia to avoid war with China is to concentrate more selectively with U.S. engagements. Over the last decade, the United States has deepened partnerships, both military and economic, throughout the region. The Pentagon under Obama deepened defense cooperation with Indonesia, Malaysia, Singapore and Vietnam.

This reality is dawning on Thailand and the Philippines, each of which have of late turned toward Beijing and away from Washington. This transformation has been particularly dramatic in the Philippines, which has transformed in a short time from being staunchly anti-Chinese under Benigno Aquino to vocally anti-American under Rodrigo Duterte. The latter has even expressed a willingness to overlook a United Nations tribunal’s ruling on Beijing’s South China Sea claims, despite the court’s decision in favor of Manila.

Rather than extending a host of tenuous commitments, it would better serve the United States’ interests if Trump consolidated and deepened core alliances. Such a strategy adheres to his “America first” vision: providing security guarantees to so many countries is costly and in most cases does not directly benefit the United States. It also exposes the United States to more potential conflicts—China perceives itself as being contained, it ratchets up its military presence in response, this fuels American anxiety and ultimately raises the likelihood of conflict.

Another reason being more selectively engaged would serve American interests is that China indirectly benefits from the regional stability the United States provides. American military commitments have upheld a regional order that mitigates interstate conflict and fosters economic prosperity. If China takes a more active role providing regional security, it could alleviate the massive financial burden Washington assumes as a regional policeman.

There are signs that Beijing is ready for such a shift in responsibility. Chinese foreign minister Wang Yi declared last year, “China, as the largest littoral state of the South China Sea, is willing to provide more public goods,” namely security against piracy and other transnational threats, in the maritime domain. Such an arrangement would mean Washington would spend less on providing security in the Pacific, while Beijing would spend more.

Washington should cultivate its core defense agreements while it still has the upper hand in the balance of power with Beijing, allowing it to make rational decisions rather than desperate ones. Whatever the core alliances, the United States must show it is truly committed to defending them. That means picking its fights wisely, and knowing when to walk away. Putting America first requires avoiding unnecessary conflicts that bleed national resources when core interests are not at stake.

Oddly Enough, Trump May Be the Man for the Job

These recommendations are a stark departure from foreign policy towards Asia in recent decades. But interestingly, Trump may be precisely the leader to seek a clean break from precedent. Both fans and critics alike can admit that Trump has shown a clear iconoclastic tendency in both domestic and foreign policy. Simply put, Trump does not give a damn about precedent if he sees moving away from path dependency as putting America first.

The dramatic shift in Asia policy outlined above is what is needed to avoid war with China. Only by departing from the current trend of increasing tensions, reinforced by recent administrations, can Trump avoid what would surely be an enormously costly conflict for China, the United States and the world. If Trump can be convinced that the United States must change course, then he may oddly be the president best placed to avoid war with China.