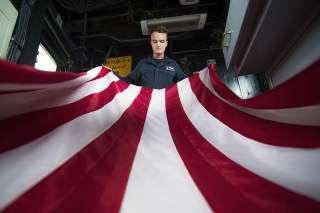 In a few short days, President Donald Trump will host Chinese president Xi Jinping at an informal summit in Florida. Although much of the agenda remains shrouded in mystery, the biggest enigma may be President Trump’s own policy for dealing with China.

So far, that policy is both inchoate and inscrutable. His administration appears to be careening unexpectedly between two possible China policies: one that is dangerously escalatory and another that is curiously naïve.

At first, Trump charged ahead with a hardline China policy. He questioned whether Taiwan was a part of China and explicitly attacked the “One China” policy that Beijing’s leaders have risked war three times to uphold. Then, Secretary of State Rex Tillerson suggested that the United States might use a blockade—generally considered an act of war—to deny China’s access to disputed South China Sea islands. And of course, Trump repeatedly attacked China in a series of tweets on issues ranging from North Korea to free trade. This was an America seemingly on the offensive in East Asia.

But just as it seemed that the Trump administration had settled on a tough and provocative approach, it abruptly reversed course. Apparently out of nowhere, a more conciliatory policy emerged following Tillerson’s March visit to Beijing.

During his visit, Tillerson departed from past U.S. policy and endorsed Chinese language calling for a bilateral relationship based on “non-confrontation, no conflict, mutual respect and win-win cooperation.” This language may seem dry and uncontroversial, but it carries deep significance. These phrases—especially “mutual respect”—have long been understood in Beijing and across the Asia-Pacific region as implying U.S. accommodation of a Chinese sphere of influence and U.S. noninterference on issues ranging from Taiwan to human rights. The weighty symbolism of these words is precisely why American and Chinese negotiators have often argued about whether Washington, DC should include them in its public statements. In repeating these lines verbatim, Tillerson essentially ended those debates and signaled a potential U.S. retreat in Asia—a possibility that was promptly celebrated by Chinese state media.

The Trump administration’s sharp swings between a policy so tough it risks war and another so soft it resembles acquiescence present a bit of a puzzle. There are a few potential explanations for this vacillation, but none suggest a workable China policy, and each would still require the Trump administration to make a course correction at the upcoming summit with President Xi. What Trump does there may ultimately shed light on where his China policy is heading.

A first explanation for Trump’s China policy swings is that there have been no swings at all: Trump is simply continuing his hardline approach. In this view, Tillerson’s conciliatory language was not a policy shift but “cheap talk” that allowed him to be tough with Xi in private while publicly smoothing the path to the Trump-Xi summit. Even so, Tillerson’s “cheap talk” may have been taken quite seriously across the region, especially given Trump’s “America First” rhetoric, and could embolden Beijing and unsettle allies. Although some analysts downplay these risks by noting that President Obama once briefly endorsed a similar Chinese phrase, they overlook the fact that his administration soon abandoned it, did not publicly denigrate U.S. alliances and launched a “Pivot to Asia” to signal its resolve in remaining a Pacific power. In contrast, the Trump administration has doubled down on Tillerson’s language, with the State Department reaffirming that he “was aware of his word choice.” If Trump reverses Tillerson’s rhetoric at the coming summit, it will be evidence that he wishes to pursue a tougher strategy with Beijing, and good policy even if he lacks such motivations.

A second explanation for the swings in Trump’s China policy is that he is now pursuing a softer strategy after months of bluster. In this view, Tillerson’s surprising remarks may be the first step toward an “America First” grand bargain. President Trump is a self-styled deal-maker already skeptical of U.S. alliances, and he may barter away those alliances—from which he said Washington should be “prepared to walk”—in exchange for concessions on North Korea or trade. While a grand bargain may seem alluring, it is quite unlike a domestic business deal in that no court can ultimately enforce it. Trading away irreversible U.S. concessions for uncertain Chinese promises is the definition of a bad deal. If Trump does not reverse or redefine Tillerson’s language, then it will raise fears that the United States will abandon allies and effectively subject its own role in Asia to Beijing’s veto. It would be better if he put such fears to rest, not only by undoing Tillerson’s concessions, but also by reiterating the importance of the U.S. role in the Asia-Pacific region.

Both of the preceding explanations assume that the Trump administration’s initial provocations and its more recent concessions form part of a kind of coherent China strategy, one that is either hardline or conciliatory. And yet, although this may indeed be the case, there is a third, more troubling possibility—that the real tale of Trump’s two conflicting China policies may be that there is no China policy at all.

The idea that the Trump administration has no China plan may well be the most plausible account for recent U.S. behavior. In this view, the swings from escalation to acquiescence in bilateral ties are neither a deliberate move towards a grand bargain nor a tactical moment of reassurance. They are instead simply the results of presidential whims, staff disagreements and insufficient interagency coordination. While it may be unsettling to think that the Trump administration lacks a coherent China policy nearly five months after President Trump’s electoral victory, there is reason to believe this may be the case. The administration lacks fully staffed agencies, has already churned through one national security adviser, and appears consumed with domestic initiatives and controversies. Moreover, press reports suggest that there may be high-level divisions within the administration, with some officials including Gary Cohn, Steven Mnuchin and Jared Kushner backing a more cooperative policy while others, such as Stephen Bannon, Peter Navarro and Wilbur Ross, advocate a more hawkish approach.

Ideally, the lack of a China strategy would give the Trump administration pause before it pursued major changes to the bilateral relationship, but so far there are few indications that the administration feels so inhibited. This enthusiasm for bold strokes can be dangerous in bilateral ties because without a China policy, it is difficult to set goals, understand tradeoffs or anticipate potential Chinese responses to grand acts of confrontation or conciliation—and all too easy to miscalculate.

When meeting with Xi next month, President Trump will undoubtedly be feeling pressure to walk out with big deals and breakthroughs. For the most part, though, that pressure should be ignored. Although President Trump recently hinted that he might strike a “very dramatic” deal at the summit, a restrained and relatively conservative approach to bilateral relations that shuns major revisions to the relationship is probably best until a clear strategy is found. Since the summit is unlikely to be postponed, and since a new strategy is unlikely to emerge before then, a simple and modest maxim should instead guide the administration’s China policy as an interim stopgap measure: first, do no harm.

Rush Doshi is a Raymond Vernon Fellow in Harvard’s PhD program in government. His dissertation focuses on Chinese grand strategy after the Cold War.