Trump Must Stand His Ground with NATO 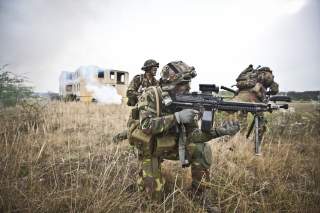 President Trump’s tense meeting with German chancellor Angela Merkel confirmed that he is serious about insisting on greater financial burden sharing within NATO. Not only did the president criticize Germany’s continuing failure to meet the commitment that alliance members made following the 2006 summit meeting to spend a minimum of 2 percent of their gross domestic product on defense, but he added another barb. Trump stated that Merkel’s government owed NATO (and, by implication, the United States as NATO’s leader) “vast sums” of money for the prior years that Germany failed to meet the 2 percent target. German officials flatly rejected both his demand and his reasoning, even arguing that difference in the relative expenditures of alliance members should not really matter to the collective defense effort.

This was hardly the first time that a U.S. administration has pressed for greater burden sharing from NATO’s European members. As I’ve noted previously, Dwight Eisenhower’s secretary of state, John Foster Dulles, threatened to conduct an “agonizing reappraisal” of Washington’s commitment to Europe’s security if allies did not do more. More recently, Barack Obama’s secretary of defense, Chuck Hagel, warned that European nations must increase their defense efforts, or domestic support for America’s NATO obligations would be in jeopardy.

U.S. officials undercut their own warnings, however, by simultaneously stressing the importance of Europe’s security to America’s own. When those officials habitually asserted that the continent’s well-being was not merely an important U.S. interest, but a vital one, European leaders understandably dismissed the accompanying warnings as lacking credibility. They either ignored the demand for greater burden sharing or (as in 2006) made paper promises for a greater effort, which they then promptly violated.

U.S. leaders never gave the Europeans sufficient incentive to assume greater relative military responsibilities. The incentive was lacking, in turn, because Washington never believed it could afford to walk away from NATO or even reduce its role, if the allies stood firm. Worse, U.S. leaders repeatedly telegraphed that message to the Europeans—often in the midst of burden-sharing controversies.

There have been intriguing hints that the Trump administration might be more serious than its predecessors about pushing the allies for greater defense outlays. During the campaign, Trump himself stated that the United States must be willing to let the Europeans defend themselves if they remained unresponsive, although he emphasized that he did not prefer that option. This week, Secretary of State Rex Tillerson indicated that he did not plan to attend the meeting of NATO foreign ministers in April. Such an apparent snub sent shock waves through the NATO community, since it seemed to convey a message that NATO was not an especially important issue on Washington’s foreign-policy agenda. That implication was strengthened because Tillerson planned instead to visit Russia at that time and also focus on preparations for a summit meeting with Chinese president Xi Jinping.

However, the Trump administration, like its predecessors, seems determined to undermine its own burden-sharing campaign. Tillerson is already beating a hasty retreat, indicating that he might be able to reschedule the trip to Russia and attend the NATO conclave after all. Both Vice President Mike Pence and Secretary of Defense James Mattis had previously muddied their burden-sharing message at the February Munich security conference by simultaneously stressing the alliance’s critical importance to the United States and Washington’s undying devotion to transatlantic solidarity.

It was one thing to argue that NATO was essential to America’s own security during the Cold War—especially the first decade or so of that long struggle—but Europe’s security environment has changed beyond recognition. Today, most of Washington’s concerns about possible threats are located well outside the European theater. Moreover, the European powers are prosperous and should be capable of managing their own security and the overall stability of their region. Equating Vladimir Putin’s Russia, a declining regional power with an economy the size of Spain’s, to the threat that the Soviet Union and its satellite empire once posed to a demoralized Europe still recovering from World War II’s devastation, strains credulity to the breaking point.

Indeed, there is an inherent contradiction between the tendency of NATO’s European members to hype the “Russian threat,” and the defense efforts they are willing to put forth. Germany, democratic Europe’s economic and political leader, spends a pathetic 1.2 percent of GDP on defense. Even NATO’s easternmost members, those countries that would be on the frontlines of a conflict with Russia, don’t do much better. Although Estonia and Poland barely meet the 2 percent threshold (the latter for the first time last year), the other countries lag far behind. Latvia spends 1.45 percent; Lithuania, 1.49 percent; Romania, 1.48 percent; Bulgaria, 1.35 percent; Slovakia, 1.16 percent; and Hungary, 1.01 percent.

Moreover, even those countries that meet the minimum budgetary target don’t necessarily spend the money effectively. Italy, the Netherlands, and some other members appear to use defense budget funds more as a jobs program for otherwise unemployed youth than as a coherent program to build a credible fighting force.

There are reasons, other than the lack of meaningful burden sharing, for why the United States should phase out its commitment to NATO. Adding an assortment of militarily insignificant client states, as the alliance is doing most recently with Montenegro, does not enhance America’s power or security. Worse, attempting to protect vulnerable client states that are on poor terms with larger neighbors, as the United States did by approving membership for the three tiny Baltic republics, actually endangers—rather than enhances—America’s security.

But the cynical free riding and lack of burden sharing on the part of the NATO allies is a sufficient reason by itself to change Washington’s policy. President Trump should follow through on his warning and finally let the European nations begin to defend themselves.