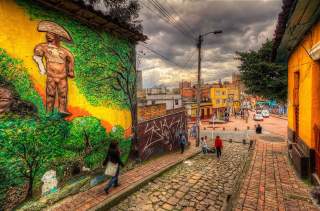 President Donald Trump is scheduled to meet with Colombian president Juan Manuel Santos at the White House on May 18. The subject of their conversation will undoubtedly have a great deal to do with the peace accord concluded last fall between the Santos government and Colombia’s most notorious guerrilla group, the Revolutionary Armed Forces of Colombia (FARC).

During his time in office, President Obama became a major booster of the peace talks, and successfully enlisted Congress in his cause. Now, having been approved on Capitol Hill, the $450 million U.S. aid package intended to support “Peace Colombia” is likely to be approved by President Trump as well. That is a pity, because—while President Trump’s signing of the bill is not likely to upset the average U.S. taxpayer—a presidential veto would at least force a Republican-controlled Congress to reexamine why it is partially underwriting extraordinarily generous concessions the Santos administration made in order to make peace with a virulently anti-United States narco-terrorist organization.

Those concessions include a quasi-amnesty for FARC members accused of crimes, as well as territory within which Colombian law enforcement has no jurisdiction. They also include guaranteed seats in the Colombian congress, and a much bigger political megaphone in the form of thirty-one FM radio stations. Additionally, as part of the negotiating process, the Colombian government acquiesced back in 2015 to the cessation of aerial eradication of coca crops—something has contributed to the recent spike in cocaine production and Colombian cocaine sales in the United States.

One reason why the Colombia deal deserves a second—and critical—look is that it rests on questionable economics. The projected costs to implement the peace deal are estimated in the tens of billions of dollars—a sum the Colombian government does not have the means to finance without foreign aid. That makes America a critical stakeholder in the process. And while $450 million isn’t all that much, as far as foreign-aid packages go, if the United States is to consider shouldering a part of future costs, lawmakers must be clear as to why they should bother to do so.

Another has to do with political costs. The well-tuned leftist propaganda machines inside and outside Colombia successfully sold the narrative that the United States’ unquestioning and unequivocal support of the peace deal would strengthen Colombia and its relations with the United States. Yet the implementation of the peace accord without modifications might actually have the opposite effect.

The inconvenient truth is that the peace deal is a victory for the FARC. While it is true that Colombian Armed Forces greatly diminished FARC numbers and retook control of swathes of FARC-controlled territory, military wins did not really “force” the FARC to the negotiating table. Getting there was the means to a desired end: that of gaining political power unencumbered by the inconveniences that come with being labeled a “violent nonstate actor.” Back in 1964, the FARC “people’s army” was originally formed to advance the political goals of the Colombian Communist Party. The organization never aimed to destroy the democratic system of government; it aimed to become part of it.

Now, having been granted political legitimacy, the FARC has a shot at shaping Colombia’s future. While the FARC’s political influence may be negligible in the upcoming 2018 elections, the Trump administration would be wrong to assume that the FARCs anti-American stance will never find its way into Colombian foreign policy. While it may have taken the FARC over fifty years and several failed negotiations with various Colombian administrations, the signing of the peace agreement this past November proves that the FARC negotiators have mastered the art of the deal.