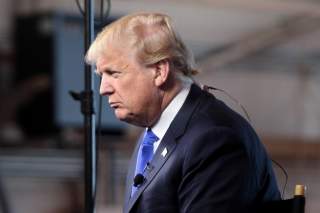 Donald Trump has excited many voters with his challenge to the status quo. For Americans increasingly accustomed to—and frustrated by—their leaders’ politically-correct and clichéd foreign policy declarations, he appeared both courageous and pragmatic, especially in comparison with Hillary Clinton’s ritualistic repetition of establishment dogmas.

Yet Trump has also been simplistic and cavalier. As his first debate with Clinton approaches on September 26, Trump has considerable work to do in refining, elaborating and disciplining his message on foreign policy. This may be essential in persuading a majority of voters that Trump is suited to serve as the leader of the free world. The clock is ticking.

In his sweeping primary victory and competitive race against the former Secretary of State and First Lady, Trump has demonstrated that the neoconservatives who have dominated intellectual discourse in the Republican Party—by arguing that Republicans won’t support other foreign policy approaches—are in fact a paper tiger, of little interest to those outside the Washington Beltway. Many neoconservatives have simultaneously demonstrated their tenuous commitment to the conservative and Republican principles in their support for the Democratic candidate.

Trump has asked hard questions about the costs and tradeoffs of military interventionism, even at the risk of re-litigating his own party’s record on the Iraq War. He does not subscribe to the naive and reckless Washington orthodoxy on democracy promotion abroad. And he has raised tough questions about what the United States should expect from its allies, many of which are not contributing their fair share financially or militarily to our common defense. Trump seems to want to provoke a genuine debate about NATO’s mission, including whether moving NATO closer and closer to Moscow and St. Petersburg contributed to U.S. national security or triggered new tension in Europe, something our foreign policy establishment has avoided for over two decades.

However, these generally commendable instincts are one thing; policies are another. And it is here that Trump has not yet made the sale. He has not explained his views in sufficient detail—or, for that matter, outlined how he would implement fresh policies. What would make trade deals like the Trans-Pacific Partnership “better”? How concretely will he defeat the Islamic State? Where will Trump draw the line with China, both economically and in the South China Sea? And how does he envision working together with Russia despite its increasingly adversarial conduct?

Trump has not answered these questions or, indeed, many others. This has been particularly problematic with respect to Russia, where he is defying hardening elite and public opinion without articulating a clear rationale for why engaging with Moscow is in the U.S. national interest. It does not help that he is misquoting Russian President Vladimir Putin, who referred to Trump as “colorful” and “talented” rather than “brilliant” or a “genius”—an important distinction in translation from Russian to English. Some of Trump’s nastier detractors have faced little opposition in trying to define him as a “Kremlin agent” even though these McCarthyite attacks undermine their exponents’ claim to any high moral ground in opposing the Republican nominee.

Trump’s campaign machinery exacerbated this problem by allowing the candidate to participate in an interview with Larry King that appeared on RT, otherwise known as Russia Today—a foreign government-sponsored propaganda outlet with few viewers inside Russia itself. The fact that King asked Trump for the interview is hardly an excuse; King’s affiliation with RT has been well-known for three years.

Trump’s “gaffes” are predictable symptoms of his apparent impatience with structure and experts. Unfortunately, no one can preside over our byzantine national security institutions entirely on the basis of instinct and improvisation. The evolution of the presidential campaign since Trump’s formal nomination suggests that few can successfully campaign that way either.

Trump faces two significant challenges in strengthening his foreign policy message. One is that some pragmatic establishment figures are reluctant to identify themselves publicly with his candidacy, making it more difficult for Trump to seek advice from those who could help him define approaches that challenge existing dogmas in persuasive, practical and achievable ways. Still, the truth is that many former Republican officials have refused to sign anti-Trump open letters. Some did not want to take a stand, while others had a degree of sympathy for elements of his original foreign policy message. Some of these individuals could contribute valuable experience and expertise.

Trump’s second challenge is that he has attracted a variety of advisors who are either outside the establishment (and lack important government experience) or, alternatively, who do not appear to share his foreign policy instincts. Accomplished and impressive public figures like Rudolph Giuliani, Chris Christie, and Newt Gingrich may be well-situated to introduce Trump to like-minded domestic policy advisors, but seem less well-placed to connect him to experienced foreign policy practitioners who may share some of Trump’s instincts. Their own foreign policy platforms as presidential candidates differed significantly from Trump’s. Former CIA Director James Woolsey, recently appointed as a senior advisor, was a leading advocate of the Iraq War, which Trump has criticized.

The argument that foreign policy should not be a priority at this phase of the campaign is belied by the hard electoral realities facing the Trump campaign. Like Ronald Reagan in the final stretch of the 1980 campaign, Trump needs to win over sizable demographics, who are disillusioned by his opponent, but do not yet see him as a potential president. Current polling suggests that Trump can win if he persuades, for example, a sufficient share of white college-educated voters who still seek this reassurance. At the same time, Trump's incomplete description of his approach to Russia could be troubling to voters with Central and East European family backgrounds in swing states like Pennsylvania. Many may not be opposed to exploring cooperation with Russia, but few likely understand Trump’s praise for Vladimir Putin.

Trump cannot and should not try to compete with Hillary Clinton in mastering the details of foreign policy.  Yet, as both President Barack Obama and former President Jimmy Carter have shown, deep presidential involvement in policy and process details can produce worse rather than better outcomes. Conversely, Nixon’s and Reagan’s very different styles suggest that there can be many routes to success. Trump doesn’t need to outdo Clinton’s expertise to persuade a sufficient number of voters that he is a credible commander-in-chief. But he does need to do more than he has so far to show that he has thought seriously about the critical national security challenges facing the United States. This is not an option but a necessity as he seeks to enter the Oval Office.