Trump Needs to Govern but Loves to Battle 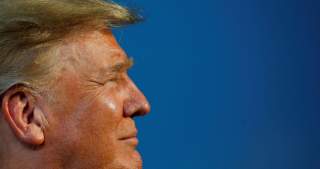 As Donald Trump headed to Japan on Friday, he took another shot at House Speaker Nancy Pelosi. Pelosi, he said, was not only the one who had started the verbal fisticuffs between him and her earlier this week, but also displayed signs of mental agitation. “Look, you think Nancy is the same as she was? She’s not. Maybe we can all say that,” Trump said. “I think Nancy Pelosi is not helping this country.”

It’s a reminder that Trump isn’t conceding an inch of political territory as he prepares to contest 2020. It is Pelosi who has emerged as his greatest antagonist in the run-up to the election. She has needled him repeatedly in recent days, casting aspersions on his mental health and judgment as well as alleging that he’s engaged in a “cover up,” in an effort to placate her own progressive base which is bellyaching over her refusal to embark upon impeachment proceedings. Whether or not Trump, as some suspect, is attempting to goad the Democrats into impeach him or is simply irate over the fusillade of attacks and investigations that they have trained upon him and his administration is an open question.

But Trump continues to act on the old adage that the best defense is a good offense. He’s taken several steps to try and shore up his base. One is distributing an additional $16 billion to farmers in a form of tariff relief. At a White House event for farmers, he hailed them for supporting him and demanded that his staff vouch for his calm demeanor when he met the Democratic leadership in an abortive infrastructure meeting. Meanwhile, Sen Lindsey Graham is warning him that he shouldn’t drop the ball on infrastructure. Will Trump heed his advice? As always, it’s a battle between going to battle, on the one hand and seeking to govern, on the other.

Throughout, Trump wants to demonstrate, both in dismissing the Democratic leadership and in subordinating his aides to his wishes, that he, and he alone, is in charge in the White House. No one has a better sense of dramaturgy than the erstwhile reality TV host, who has transferred his show biz methods wholesale into the Oval Office. Not unlike Ronald Reagan, Trump knows that in the celebrity era, the appearance of success may well be more important than its substance.

Then there is Trump’s decree yesterday vouchsafing Attorney General William P. Barr with the authority to declassify secret intelligence in an attempt to scrutinize the origins of the Russia probe and the Trump campaign. Democrats, already hostile to Barr for his handling of the Mueller report, are now contending that he is about to spin the evidence once more, declassifying what he deems helpful to Trump and suppressing what is not. House Permanent Select Committee on Intelligence Chairman Rep. Adam Schiff tweeted this morning, “While Trump stonewalls the public from learning the truth about his obstruction of justice, Trump and Barr conspire to weaponize law enforcement and classified information against their political enemies. The coverup has entered a new and dangerous phase. This is un-American.”

But Trump’s true obstacle won’t be Democrats who wield no influence on the declassification process but the intelligence agencies themselves. Director of National Intelligence Dan Coats is publicly warning that any declassification will have to be performed with the utmost care. Another matter is whether the public, which has evinced little interest in the Mueller report, will be attentive to even more Russia investigations.

The real issues that will likely determine his political future, apart from whom the Democrats nominate to run against him, are foreign policy ones: Venezuela, Iran, North Korea and China. So far, Trump has not been able to demonstrate the progress he promised. When it comes to Venezuela, which could have a direct impact on his electoral fortunes in Florida, he has not been able to oust the Maduro regime. Instead, the hardline policies espoused by Secretary of State Mike Pompeo and National Security Adviser John Bolton appear to have solidified rather than undermined the regime. When it comes to Iran, Trump has just signed off on sending hundreds more troops to the Middle East—the opposite of what he campaigned on. If a war were to begin in the Strait of Hormuz, Trump would likely watch his reelection chances go up in flames. On North Korea, Trump has failed to produce any progress on denuclearization, but has created the conditions for an incipient détente. Perhaps the most perilous course that Trump has adopted is to confront Beijing on trade. Whether he wants to admit it or not, he needs a deal with Beijing. The economic consequences of an all-out trade war with China could be dire. The Wall Street Journal editorial page notes, “Not long ago Mr. Trump said he wanted a China trade deal but lately he’s been suggesting he’d be as happy running for re-election in 2020 as the trade hawk who was willing to take on China. We wonder how Iowans will feel about that if farm incomes continue to decline for another 18 months.” His presidency could rise or fall on the answer.