Trump Needs His Own Army of Experts 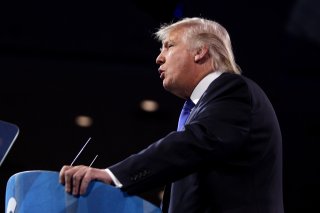 THE GREATEST challenge facing President-elect Donald Trump, if he wishes to carry out anything resembling the agenda that won him the Republican nomination for president and then the presidency, is the lack of high-level Trumpites who can implement Trumpism.

When Ronald Reagan challenged the GOP establishment and won the presidential race of 1980, he did so with the backing of the conservative movement, which dated back to the 1950s and had already nominated Barry Goldwater in 1964. For decades, movement conservatism had built up a flourishing infrastructure around the magazines National Review, Modern Age and Human Events, and membership organizations like the Intercollegiate Studies Institute and Young Americans for Freedom, and the Henry Regnery Company, a right-wing book publisher. The movement conservatives added their own think tank, the Heritage Foundation, in the 1970s. They found allies in ex-liberal neoconservatives with their own institutions: the Committee on the Present Danger, Commentary, the Public Interest, the National Interest and the American Enterprise Institute, an older probusiness think tank retooled by the neoconservatives. Then there was the libertarian movement, with its own think tank, the Cato Institute, and its own flagship journal, Reason; and the evangelical Protestant religious-right subculture and even proto-Trump populists mobilized by Republican activists like Richard Viguerie. The Federalist Society groomed conservatives for appointments to the executive branch and the federal judiciary.

Mandate for Leadership, published by the Heritage Foundation in January 1981, had twenty volumes and three thousand pages. It contained thousands of specific suggestions for changes in federal policy, many of which were implemented.

Reagan, in short, was the tip of an iceberg. Trump is the iceberg. There is no doubt that Trump’s critique of U.S. military overextension and of trade deals that have led to the devastation of much of U.S. manufacturing resonates with immense numbers of American voters. But those perspectives find almost no representatives in elite institutions or elite journals.

Trump’s alliance with Breitbart, the sensationalistic, populist right-wing news website, served him well in his primary- and general-election campaigns. But apart from a new journal, American Greatness, the successor to a short-lived website, The Journal of American Greatness, there are no pro-Trump political magazines. National Review, Commentary and the Weekly Standard are full of “Never Trumpers.” Nor are there any intellectual journals to fill the role played by Modern Age for the movement conservatives and the Public Interest and the National Interest for the neoconservatives.

Trump is far from consistent, but in foreign policy he sometimes sounds like a Nixonian realist. With the exception of the Center for the National Interest, and this publication, there are no influential think tanks or magazines that promote foreign-policy realism, which finds most of its support among academics. Instead, political appointees and career military officers and civil servants in America’s national-security establishment, of both parties, continue to adhere to the bipartisan elite strategy of U.S. global hegemony, to be pursued through encircling other great powers like China and Russia on their borders and by means of multiregional free-trade agreements with rules written to favor American industries like finance, tech and pharma.

In domestic policy, Trump’s support for massive infrastructure spending is at odds with the deficit-hawk consensus of his own party, whose leaders have opposed such proposals in the past. Trump promised his voters that he would leave Social Security and Medicare alone. Cutting the Social Security benefits of working- and middle-class Americans and replacing Medicare with a complicated private voucher system resembling Obamacare is the consensus approach to entitlements in the rest of the Republican Party.

In addition to appointing the cabinet or heads of major executive agencies, the president also must hire or rehire around three thousand political appointees, plus around three thousand part-time appointments and an army of White House staffers. In 1981, many of these were antiestablishment Republicans who came from conservative-movement institutions such as think tanks, magazines and organizations like the Federalist Society. Unlike Reagan, Trump has no preexisting armies to draw on.

Outsider candidates can run against the experts and technocrats, but once in power they cannot succeed unless they have experts and technocrats of their own. Reagan stormed the White House at the head of an army of office seekers ready to govern. And Trump? He toppled the Bush dynasty and defeated the Ryan wing of the Republican party. Now he needs to create his own loyalists. It won’t be an easy task.

Michael Lind is a senior fellow at New America and author of The American Way of Strategy.