Trump Needs To Make Up His Mind On China 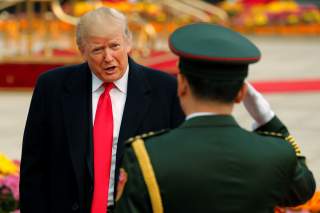 Donald Trump and Xi Jinping might have used their meeting at the G20 summit in Buenos Aires to call a shaky truce to the U.S.-China trade war, but prospects of a durable economic peace between the two countries remain bleak. Some of the biggest and most serious barriers to a lasting trade deal exist on the U.S. side of the relationship. For beneath the bluster and the bombast, the reality is that the Trump administration seems to be divided over the true purpose of the trade war.

And without a clear idea of why it was necessary to start the conflict, there can be no hope of finding an agreement to bring about its end.

For President Donald Trump, the trade war with China is worth pursuing simply because it pays dividends in the domestic sphere. Even though his protectionist policies come with a hefty price tag, the President has good reason to believe that, on balance, he gains more political support than he loses from styling himself as “Tariff Man.” Viewed in this cynical light, it does not matter that Trump has no strategic endgame in mind when it comes to shaping U.S.-China relations; he is captivated by the process of the trade war itself rather than the long-term prospect of any particular outcome.

To their credit, most of the president’s economic advisers do not view economic warfare with China as a consumption good. They have strategic goals in mind. Some such as Peter Navarro regard China as a long-term threat to the United States and thus argue for stiff limitations on the economic relationship between the two powers. Offering China unrestricted access to U.S. markets and technology will only hasten China’s rise and weaken American primacy, they reason. This contingent makes the case that it is far better to isolate the country economically and contain the growing Chinese influence, thus staving off the moment when Beijing overtakes Washington as the world’s preeminent economic power.

In the academic world, support for economic statecraft in this vein comes mostly from the Realist school of International Relations theory. To varying degrees, realists like Aaron Friedberg and John Mearsheimer argue that it makes little strategic sense to aid and abet the rise of China through economic engagement; any benefits that the United States might derive from a close economic relationship must be weighed against the future threat posed by China outstripping U.S. influence in the Asia-Pacific region. Like Navarro, these realists have suggested policies that would help to slow, halt, or even reverse China’s growth in power.

Yet there is another school of advisers who seem to have flexed their muscles at the recent G20 summit in Buenos Aires: a group who want to “get tough” on China but genuinely desire an improved bilateral relationship as a result of such a hardline stance. For these figures, the goal of economic warfare is not to curry favor domestically (like Trump) or to contain China over the long term (like the Realists), but rather to force Beijing to the negotiating table in hopes of fashioning a truly “win-win” economic relationship that can stand the test of time.

This school of thought is populated by officials such as Steven Mnuchin and Larry Kudlow, as well as the controversial China hawk Michael Pillsbury, who is advising the president from outside the administration. To this group of China-watchers, it is certainly high time that Washington take decisive action to address Beijing’s unfair trade practices, but such policies must be pursued in a careful, calibrated, and intentional way. The endgame is an accommodation, not a collision.

The problem is that those who wish to contain China and those who wish to negotiate with Beijing are operating at cross-purposes with one another: the point of the trade war can either be to weaken China over the long-term or to strike a grand bargain in the near-term, but it cannot be both. At some point, the United States will have to decide what sort of outcome it wants to achieve.

The challenge for each camp of trade hawks is to convince President Trump that his domestic self-interest is best served through pursuing their preferred agenda. Otherwise America’s China policy will continue to vacillate, existing to bolster the president’s domestic standing but failing to accomplish any desired changes in Chinese behavior.

So far, results have been mixed. Those who want to stymie China’s economic rise scored a major victory during negotiations over the United States, Mexico and Canada Agreement (USMCA). The inclusion of the so-called “poison pill” clause to prohibit signatories from concluding future trade agreements with “nonmarket economies” like China was a clear attempt to isolate Beijing.

If similar poison pill provisions find their way into future U.S. trade agreements—with post–Brexit Britain, for example—then the pro-containment trade hawks will have won the day. Such attempts to turn U.S. trading partners against China is likely to have a corrosive impact on U.S.-China relations and actively works against Washington and Beijing finding a modus vivendi.

The available evidence suggests that there is some domestic appetite for a wide-ranging strategy of economic containment, especially in geographic areas hit hardest by import competition. After all, if jobs are conceptualized as a commodity to be won, lost, or even stolen, a hawkish economic strategy towards China can be justified as necessary step to recover what is rightfully American. This is exactly the image portrayed in Navarro’s 2016 film, Death by China: How America Lost Its Manufacturing Base.

But the pause in U.S.-China hostilities announced at G20 likely signals that moderates like Mnuchin and Kudlow still have considerable influence over U.S. policy. By pulling back from the brink of a spiraling economic conflict, the Trump administration showed that it was still open to the notion of a comprehensive bettering of the bilateral relationship. Whether or not the moderates can persuade Trump to follow through on the “ceasefire” is another question.

There is at least a chance that Trump can be talked into rethinking his approach to U.S.-China trade. Despite the protectionist policies implemented thus far, Trump has failed to make any progress along the one measure of economic success that he seems to prize above all others: the trade deficit. In fact, the deficit with China reached its highest level ever recorded last month. If the president can be convinced that a widening trade deficit would hurt his domestic standing, then he might yet be won over to the cause of winding down the trade war and developing a sounder foreign economic policy.

Of course, it’s far too early to tell whether the Buenos Aires summit will be remembered as the start of a lasting thaw in U.S.-China relations or whether the budding rapprochement will be ephemeral. Just days after the meeting in Argentina, even Pillsbury voiced concern that President Trump would end up destroying the chances of a trade deal with China by being too eager to posture before domestic audiences. For all his hawkishness on China, Pillsbury recognizes that leaders in Beijing must be treated with the respect that they deserve, not least of all because President Xi has his own domestic audiences to consider.

How the internal debate over trade plays out within the Trump administration will matter enormously for the future of U.S.-China relations. For decades, the United States has tried to engage China economically in hopes of feathering Beijing into the liberal international order. Under President Barack Obama, the strategy underwent a marked shift: although bilateral economic ties between the United States and China remained strong, the Obama administration unmistakably pushed the Trans-Pacific Partnership as a multilateral effort to isolate China economically—something not lost on Beijing.

Trump’s trade war with China is a continuation of this strategy of economic containment, albeit with a distinctly unilateralist tilt. As of yet, however, the Trump administration’s endgame is desperately unclear. Does the United States want to contain China over the long term in hopes of preserving American primacy in the Asia-Pacific? Is Trump angling for a near-term grand bargain with Beijing that might put the bilateral relationship on firmer foundations? Or does the Trump administration simply lack a shared strategic vision for U.S.-China relations?

Until these questions are answered, America’s economic policy toward China will continue to be riven by contradictions. Those who favor a strong, positive, and open economic relationship between the United States and China had better hope that such ambivalence is resolved in favor of the moderates.

Ben Smith is an MA student at Colorado State University, where his research focuses on international political economy.