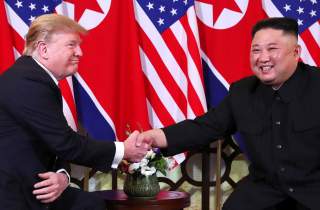 THE TWO Koreas and the United States appear to be headed, albeit slowly, towards a peace and denuclearization agreement. South Korean president Moon Jae-in has declared his objective of achieving a peace declaration before the end of his presidency (in 2022) and has already held multiple summit meetings with the North Korean leader in 2018 and 2019 for this purpose. President Donald Trump agreed to conclude a peace agreement at the Singapore Summit with North Korean leader Kim Jong-un and sees his remaining time in office as advancing toward this goal.

The move to a peace declaration, while generating temporary political windfalls, may also have the unintended consequence of permanently weakening the U.S.-Republic of Korea (ROK) alliance. In particular, the whims and impulsive nature of this U.S. president, combined with a deep and abiding skepticism about U.S. overseas military deployments, could result in his abandoning the time-honored United States ground troop commitment to the Korean peninsula. For some Koreans and Americans, a pullout after sixty-five years might be a welcome outcome as South Korea develops more autonomous capabilities to defend itself. But, as Joseph S. Nye, Jr. wrote in Foreign Affairs in 1995, the U.S. presence on the Korean peninsula is like oxygen. You don’t notice it when it is there, but once it is gone, there is nothing else you can think about to survive.

THE SOUTH Korean government has worked feverishly towards achieving a declaration ending the state of hostilities on the peninsula. After a tumultuous 2017 of missile and nuclear tests by the Democratic People’s Republic of Korea (DPRK), the Moon government utilized the February-March 2018 PyeongChang Winter Olympics and Paralympics to facilitate high-level exchanges with North Korean officials, including with North Korean leader Kim Jong-un and his sister Kim Yo-jong. In March 2018, Moon managed to elicit a commitment from President Trump to meet with the North Korean leader to resolve the nuclear issue. When Trump cancelled the meeting on May 24, Moon stepped in, meeting with the North Korean leader a second time two days later to put the summit back on track. The Singapore Summit in June 2018 was long on ceremony and photos but short on substance, producing a broad statement of principles on denuclearization and reconciliation but no tangible progress. As subsequent U.S.-DPRK negotiations to implement the Singapore declaration appeared to stall at the end of 2018 when Secretary of State Mike Pompeo cancelled a trip to Pyongyang, the ROK again intervened with a third summit meeting to avoid a breakdown in diplomatic momentum and to promote a second Trump-Kim summit in Vietnam in February 2019.  When that meeting concluded abruptly without an agreement, Moon again stepped in to try to pick up the diplomatic pieces.

The peace declaration sought by the South Koreans lacks clarity as a concept. As offered by Moon in a speech to the Council on Foreign Relations in New York, it is not akin to a formal peace treaty ending the war, but more of a modest political declaration. While some guard posts and mines along the Demilitarized Zone are being removed and military exercising is suspended, the declaration appears aimed to use such measures to transform the hostile atmosphere surrounding the sixty-six-year ceasefire to a more conciliatory one, but without a formal end to the war. Because the peace declaration does not impact the United Nations Command, the Combined Forces Command, nor the status of U.S., ROK or DPRK military forces on the Korean peninsula, the South Korean government contends, it is a political “trust-building” device that does not threaten the U.S.-ROK alliance nor negotiate the status of U.S. forces on the Korean peninsula.

As limited a measure as this sounds, the peace declaration is being pursued with great intensity by the two Koreas. Moon has declared the objective of achieving it before the end of his presidency, and steps along this path—including the opening of a liaison office in Kaesong, North Korea, and breaking ground on inter-Korean railway projects—have been taken with grudging U.S. consent. The question naturally arises as to why the South Korean government is pursuing this declaration with such vigor, when it is a half-measure that won’t fundamentally alter the military balance and will not be accompanied by a final dismantlement of North Korea’s nuclear weapons threat.

First, the South Korean government does not want to return to the “Fire and Fury” recriminations of 2017 when Seoul looked like it might become entrapped in a war between the United States and DPRK as President Trump and North Korean leader Kim threatened to attack each other. Kim conducted twenty ballistic missile tests and one hydrogen bomb test during Trump’s first twelve months in office. Trump ordered heightened exercising and movement of strategic assets and munitions to the region. During this period, I viewed the danger of miscalculation and escalation as very real, and never heard more talk about war inside the Beltway during my thirty years of policy. For the South Korean government, almost anything is better than another war on the Korean Peninsula; thus, it continues to press hard to prevent the loss of momentum created from the Winter Olympics through the summit meetings in Singapore and Hanoi.

Second, domestic politics drive the Moon administration towards a peace declaration. Upon taking power in a popular referendum after the impeachment of Park Geun-hye in December 2016, the Moon government believes its engagement-oriented policies on North Korea truly represent the will of the people. Moreover, progressives within the Blue House feel as though they are making up for lost time after nine years of conservative governments in South Korea, under Park and her predecessor Lee Myung-bak, and eight years of the Obama administration’s “strategic patience” policy, both of which did little to address a festering situation with North Korea that eventually led to the war crisis in the first twelve months of the Trump administration. From this progressive perspective, it would not have mattered who won the presidential election in the United States; negligence of North Korea over the past decade would have led to the same outburst from Pyongyang even if Hillary Clinton had been in the Oval Office. Thus, Seoul needed to engineer a course correction.

The third reason for the Moon government’s unilateral pursuit of engagement has to do with a unique confluence of Korean ideology and American political unconventionality. Key members of the current government in Seoul are motivated by a deep, ethnic nationalist conviction that the source of all the country’s ills stems from the division of the homogenous Korean people by external powers. Achieving inter-Korean reconciliation is the priority, but this has been complicated by opposition from the security patron, the United States, throughout the Cold War and because of the nuclear threat. But with Donald Trump, an egotistical individual who takes pride in dropping all policy conventions, the South Koreans see a unique opportunity to pursue inter-Korean reconciliation. Seoul can advocate an agenda calling for summits between U.S. and DPRK leaders, rebuilding of inter-Korean economic projects, and peace declarations, all the while giving credit for these accomplishments entirely to the U.S. president. For example, when ROK national security advisor Chung Eui-yong succeeded in eliciting a commitment from Trump to meet with Kim Jong-un, his public announcement in front of the West Wing was preceded by obsequious praise stroking the U.S. leader’s ego—“I explained to President Trump that his leadership and his maximum pressure policy, together with international solidarity, brought us to this juncture. I expressed President Moon Jae-in’s personal gratitude for President Trump’s leadership…”

The theory behind a peace declaration, advocates argue, is that only with a reduction in the North’s external threat will the regime be capable of considering the surrender of its nuclear weapons. But in reality, a peace agreement would gain little purchase on Pyongyang handing over its weapons anytime soon. First, as Siegfried Hecker, Robert Carlin and Elliot Serbin have argued, both the size of North Korea’s nuclear program and the adversarial nature of relations between the DPRK and international inspectors compels that a disarmament process, were it ever agreed upon, would take well over a decade to fully execute. Second, there is a catch-22 logic behind a peace declaration—that is, North Korea will never give up its weapons for a peace declaration, which is temporary and informal; however, a formal and permanent peace treaty would not be possible without removal of those weapons. As a result, the South Koreans and the Chinese have pushed a more modest “declaration for declaration” diplomatic formula—that is, the exchange of a peace declaration by the United States for a nuclear inventory declaration by the DPRK. But even this modest denuclearization step seems unlikely, as the previous nuclear agreement with North Korea fourteen years ago, which I participated in, stalled when the process reached the point of requiring a declaration by Pyongyang. North Korea has instead put forward even more modest measures—such as allowing international inspectors to verify the decommissioning of old nuclear test sites and facilities—which are purposefully designed not to allow international access to the core extant and potential nuclear and missile capabilities of the regime. The point of this is to say that barring some surprise backchannel negotiations that promise major concessions by the North (as President Trump has sometimes signaled—“I think what we have done behind the scenes, which nobody really knows about, and I do not blame you for not knowing…but if you saw what was going on behind the scenes, you would be impressed…”), the United States and South Korea appear headed for a peace declaration in return for modest denuclearization measures that do not come close to approximating the goal of final and fully verifiable denuclearization.