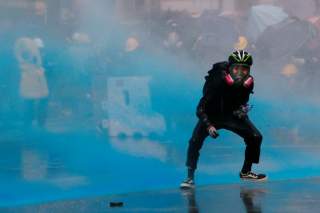 President Donald Trump warned Beijing on August 18 that trade talks would suffer if China resorts to violent suppression of pro-democracy protests in Hong Kong. This warning was viewed by many as an unnecessary mixing of two separate issues, as well as an egregious interference in China’s internal affairs. Yet, from a human-rights perspective, Trump’s statement serves as a strong caution to Beijing and compels the regime to exercise restraint towards the protestors.

In his conversation with the press, Trump was careful to explain that while he has sole authority to strike a trade agreement with Beijing, his respect for the views of Congress and the American people would oblige him to take their views into account. He went on to point out that a violent suppression of the Hong Kong protests would likely sour Congress’ views of both U.S.-China relations and the trade deal. Such an outcome, Mr. Trump implied, would leave him with little room to maneuver in his efforts to secure a trade deal and could doom the entire endeavor.

By linking the trade war and Hong Kong protests, this much is clear—Trump is dangling the trade agreement in front of China with the hope that it will impress upon Beijing the need for moderation in Hong Kong.

For good measure, Trump took it a step further in his discussion with reporters, suggesting that Chinese president Xi Jinping himself has the competence and skills to resolve the unrest if he were to meet with the protestors. While some understandably assert that such a direct statement could be interpreted as a face-losing public challenge to Xi and a further intrusion into China’s domestic affairs, Trump’s comments place the onus on the Chinese leader while also praising him.

Trump’s remarks have put renewed focus on Beijing’s next move. Over the past two months, the world has watched as protesters have expressed their opposition to the city government’s extradition bill. If passed, that bill would have allowed the transfer of suspects to mainland China in addition to other locations where Hong Kong does not have either jurisdiction or extradition agreements.

The protests have included the vandalizing of the Chinese government’s liaison office, attacking police and disrupting commerce by paralyzing airport operations and train departures.

Yet, thus far, the People’s Armed Police have not been sent in to quell the demonstrations. This notwithstanding the Chinese government labeling the protests as “near terrorism,” mobilizing paramilitary forces to the neighboring city of Shenzhen and making pronouncements similar to what was used prior to the June 1989 Tiananmen Square massacre.

Clearly, Xi doesn’t want to do anything rash given the potential ramifications.

Hong Kong’s specialized services sectors, financial markets and legal system—all of which facilitate the flow of foreign money into China—would be at stake if a violent suppression of the protests were carried out.

Beyond this, foreign businesses would likely transfer their operations and businesses to other Asian capitals such as Singapore and Tokyo, taking away a key link between the outside world and mainland China.

Although Xi is against negotiating with the protestors, he does not have any other option without risking severe economic damage to Hong Kong and jeopardizing the trade war’s resolution with the United States.

Trump’s underscoring of the need for a peaceful solution and tying this outcome to a trade deal can serve as an effective impetus towards what is clearly needed: a political resolution between Beijing and Hong Kong.

It bears mentioning that Xi is cognizant of Trump’s considerable leverage in the trade war, which makes the president’s emphasis on a non-violent settlement all the more powerful. Xi understands the disproportionate effect of trade on the Chinese economy when compared to that of America. Moreover, Xi knows there is broad, bipartisan support in Washington for a get-tough approach on China and that Trump presides over a historically strong economy with unemployment at a fifty-year low.

By suggesting that the peaceful resolution of the unrest in Hong Kong is a requirement for a trade deal, the president is throwing a wrench into Xi’s plans. Trump’s efforts to this end are laudable and may just make the difference towards a non-violent compromise to this difficult impasse. If played right, then Trump’s words could serve as a diplomatic masterstroke, sparing the territory of a widely-feared Tiananmen Square-style massacre while standing up for American economic interests in the process.

Ted Gover, Ph.D., writes on foreign policy and he is the Director of the Tribal Administration Program at Claremont Graduate University.