The Trump-Putin Summit and Reliving the Cold War 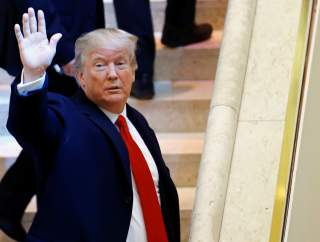 “Treason” and “traitor” became buzzwords. Charles Blow titled his New York Times column on the Trump-Putin meeting “Trump, Treasonous Traitor,” and concluded it by writing, “America is under attack and its president absolutely refuses to defend it. Simply put, Trump is a traitor and may well be treasonous.” So many things of this sort appeared that a counterliterature popped up, with Slate and the Daily Beast running stories whose headlines warned, “Accusing Trump of treason makes him stronger” and “Stop Saying Trump Committed ‘Treason.’ You’re Playing Into His Hands.” “By federal statute, treason is a capital crime, punishable by death,” Fred Kaplan reminded his readers in Slate. “It is also the only crime that the founders chose to define in the Constitution, and they did so very carefully and very narrowly,” such that outside of aiding an enemy with whom the U.S. is in armed conflict, hardly anything qualifies.

President Trump’s extemporaneous, untutored, and highly personal style of speaking is less suitable for international relations than domestic politics, and least suited of all for appearances alongside as dangerous and supremely self-controlled a figure as the leader of Russia. But once again America’s former leadership class is excessively invested in appearances and ritual and oblivious to the substance of a changing world, one in which neither domestic politics nor international affairs remains within the margins established by the post–Cold War liberal consensus.

Public opinion polls in all but a handful of NATO member countries show that Europeans do not want their own countries to fight in the event of a conflict with Russia—outside of Poland and Holland, most Europeans believe that only the Americans, if anyone, should be responsible for an armed confrontation with Russia. Some 49 percent of Americans, meanwhile, believe that the United States should not fight for NATO allies if they do not increase their defense spending. These numbers point to a profound lack of legitimacy on the part of NATO and the posture toward Russia that the alliance automatically assumes. But even as NATO loses legitimacy in the eyes of Europeans and Americans, it expands inexorably, now taking in the country formerly known as the Yugoslav Republic of Macedonia.

Vladimir Putin has an interest in seeing NATO weakened or destroyed, and this alone is enough to reinforce the old Western leadership’s commitment to the almost seven-decade-old anti-Soviet alliance. But neither in the United States nor in Europe, where the public is concerned, is Putin’s desire what matters most. If American voters were as Russophobic as American elites, Mitt Romney would have been elected president in 2012, when he all but promised a new Cold War.

The original Cold War NATO had obvious, limited aims within the context of an ideological struggle. It was an alliance aimed at holding the line against Soviet expansion—not continually expanding itself. After NATO’s founding in 1949, only four additional countries joined the alliance before the end of the Cold War some forty years later. But in the mere two decades between 1999 and now, a further thirteen countries have joined, with Macedonia’s membership pending. This is a very different alliance, one that has never renewed its wellsprings of legitimacy among the peoples of its founding members.

The Soviet Union, which provided NATO its raison d’etre, has been gone for almost thirty years. Putin’s Russia is still a menace to its immediate neighbors and a source of mischief—up to and including murder, but most often taking the form of support for disruptive political movements—to all Western countries. But whatever ideological or subversive reach Putin’s Kremlin may have, it is paltry compared to the often religious zeal of twentieth-century Communism, which infected every Western country and revolutionized much of the developing world. Putin’s strength is exaggerated in the eyes of Western liberals, however, because they identify it with their own weakness—a weakness that has more to do with their own alienation from their fellow citizens than with Russia’s tampering with other nation’s politics. By misidentifying an internal lack of legitimacy with an external threat, the liberal West makes itself doubly vulnerable: to further erosion of norms within its own sphere, arising from a failure to address its real causes, and to unnecessary conflict with Russia, including the ultimate risk of nuclear war. That North Korea’s nuclear program causes such consternation among the Western political class, while the infinitely greater danger posed by Russia’s nuclear arsenal is overlooked in the frenzy to castigate Putin, is an index of how unserious the West’s leadership class has become. Needless to say, a Western leadership class distracted by re-enacting the Cold War of thirty years ago is also a leadership that is unfit to address the much different challenge of China’s rise toward pre-eminence in the 21st century.

President Trump blundered in his appearance with Putin. His intuitions are nevertheless correct: a new Cold War with Russia would not end as happily as the real Cold War did, for reasons that have nothing to do with Romney-esque hype about Russian power. Trump was even correct in substance, if not in the occasion he chose to raise it, to defy the unconstitutional belief that the president has a duty to act as public advocate for the executive agencies that are, in fact, subordinate to him. To speak of “treason” is silly, but if anything is against the Constitution, it is the belief of Trump’s critics that the president cannot gainsay the “intelligence community.” On the contrary, whatever it may report to him, he is free to speak and act as he deems best—the president’s orders are binding upon the intelligence community, not the other way around. If Trump decides that Russia will not be our enemy, the intelligence community has no standing to challenge him. To do so would be a coup d’etat. Congress can impeach him, and the voters can choose not to re-elect him. But the intelligence community’s role is only to advise and serve, not to command or constrain.