Trump and Putin: What Comes Next? 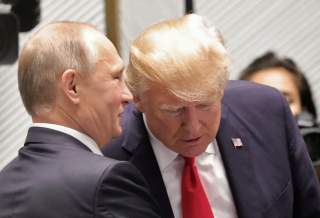 Last week, writing in these pages, I noted that any encounter between Donald Trump and Vladimir Putin that would take place at the Asia-Pacific Economic Cooperation summit in Da Nang, Vietnam, would have to address two critical questions if there was to be any clarity in U.S.-Russia relations. We’ve now gotten a first draft of answers.

I argued that, for the Russian side, the overarching issue is whether or not Donald Trump is calling the shots on U.S. policy. Seven days ago, the White House press operation was signaling that there would be a formal encounter between the two presidents, a scheduled meeting with a defined agenda. As the week progressed, the United States began to back away from those announcements. By the end of the week, the encounter was a far less structured event, essentially folded in around an informal stroll to a photo opportunity and brief chats in between APEC sessions—nothing at all like the meeting that took place at the G-20 summit in Hamburg in July. What happened? And does it suggest that Donald Trump has a George W. Bush problem—the apparent inability to take a personal rapport with Vladimir Putin and transform it into concrete policy directives?

As the APEC summit drew nearer, it became clear that the Russian president would not bring any agenda to Vietnam that suggested a willingness to reverse course or offer major concessions to U.S. preferences regarding Russian policy on North Korea, Syria, Iran and Ukraine. At best, the Russian leader might seek to bargain with President Trump, seeking concessions from Washington in some areas in return for Russian acquiescence to American proposals in others. There are, of course, two major items being prepared for the president’s review and approval. First is the application of U.S. sanctions, authorized by congressional legislation, both against Russian companies and against third parties that do business with them. Here, a critical test is pending within weeks, should the Italian energy conglomerate ENI go ahead with a joint project with Rosneft in the Black Sea—a deal grandfathered in under European regulations, but one that will certainly draw the attention of U.S. regulators for any violations of U.S. financial or technological sanctions. The second is the final decision on whether or not the United States will provide advanced weaponry, especially antitank missiles, to the Ukrainian military.

Because of the way the United States geographically boxes Russia in as only a “European” state, Trump’s “Russia hands” were not scheduled to join his delegation to APEC. Thus, there were concerns that any substantive meeting between Trump and Putin would occur without the U.S. officials who would be most likely to provide necessary expertise (and who would wind up implementing any results). Linked to that were fears that, if another meeting followed the Hamburg precedent (of just the two presidents and their chief diplomatic officers), Putin might convince Trump to accept a series of compromises: trading Russian support of Trump’s initiatives in return, for instance, for concrete sanctions relief and acceptance of Russian preferences for Syria and Ukraine. There had already been some advance warning of this, such as, when Saudi Arabia’s King Salman visited Moscow last month in an historic summit, the Saudi delegation seemed to suggest that a Russia playing a more constructive and stabilizing role in the Middle East would outweigh the logic of maintaining the full raft of U.S. sanction, imposed after the 2014 incursions into Ukraine and after the 2016 elections.

Keeping the tenor of the encounters between the two presidents at Da Nang informal precluded the chance of any intense bargaining sessions on the sidelines. But for the Russian side, it also raises questions—of whether Trump is in fact inclined to bargain with the Kremlin, or whether he has the clout to carry through any agreement in the face of stiff domestic opposition, not only from his own national-security team, but from Congress, where opposition to any concessions to Vladimir Putin is one of the few genuine bipartisan issues left. There is no support (even from his own appointees) for any compromise with Moscow that leaves Bashar al-Assad in power in Damascus, or that ratifies any of the gains Russia has made in Ukraine since 2014—not when there is still a sense that strong, concerted U.S. action could lead to different outcomes. Indeed, with the European Commission recognizing that Russian plans to bypass Ukraine by 2019 are moving ahead, even despite existing sanctions, new efforts are underway to find ways to block the expansion of the Nord Stream line and forestall the expansion of the Turkish Stream export route to Europe. There is confidence that expanded sanctions, plus a renewed commitment to the Syrian opposition, could change Russia’s calculations—and therefore there is no reason to prematurely concede anything to the Kremlin.

But then we have Trump’s comments to the press following the Da Nang summit. Much of that coverage has focused on Trump’s willingness to accept Putin’s denials of Russian interference in the 2016 election at face value, but two other items deserve greater attention. The first is that the president, having been convinced, guided, or maneuvered into not having a formal sit-down with Putin in Vietnam, is apparently committing to a full-fledged summit meeting of the two presidents and their respective “teams” at some indefinite point in the future. If so, then how the agenda for that meeting is set, and what parameters are established for the negotiations, will be critical. The second is what role Trump himself intends to play in Russia policy. What struck me at times about his comments on Air Force One was how he seemed to view himself, as “the president,” as something separate and distinct from the executive branch as a whole. As chief executive, Trump is in charge of the U.S. intelligence community, the diplomatic corps and the military. Yet his comments seem to suggest that, at times, the government is pursuing a policy towards Russia that he personally disagrees with but somehow has little power to change.

So while we’ve gotten a first set of answers, the questions still remain unresolved. Sideline encounters at the G-20 and at APEC were not successful in changing the dynamic of the U.S.-Russia relationship. So will a direct Trump-Putin summit be a game changer? Only if those original questions can be answered definitively.