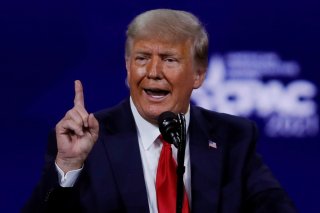 Forget the naysayers in the media, the NeverTrumpers, and the RINOs. Despite the best efforts of some of its once-leading figures to unlearn the lessons taught by former President Donald Trump, the Republican Party is in great shape going into midterm elections next year and in setting the stage for the 2024 presidential election. Staying the course will propel it to victory.

It is customary self-indulgence after a change in power in Washington to predict that the other party is not only defeated, but likely to go extinct. This past election was no exception. In March, President Joe Biden said he had no idea if there would even be a Republican Party in 2024. Former President George W. Bush said Republicans “want to be extinct.” The facts say otherwise. Setting aside the furiously contested presidential election result, Republicans gained seats in the House in 2020 and will likely build on that performance next year, taking control of one or both houses of Congress.

In a rare act of candor that was never meant to be public, Rep. Abigail Spanberger (D-VA), who almost lost her seat, told House Speaker Nancy Pelosi and other Democrats after the election that radical views like defunding the police cost Democrats and would hurt them more in the future. She said: “If we are classifying Tuesday as a success from a congressional standpoint, we will get f---ing torn apart in 2022.” How right she is.

Yet Democrats have not heeded her warning. Instead, they have misinterpreted the 2020 result as a mandate to indulge their most radical instincts. They have wasted trillions of dollars on an economy that simply needed to be reopened, and plan to waste trillions more while raising taxes dramatically, while pretending that they will only target the wealthy. They have mused about packing the Supreme Court with activists. They have gone to war against domestically produced fossil fuels, which we rely on and which make us energy independent. They have invited a wave of illegal immigrants to our southern border and increased the quota of often-radical and always-broke refugees they plan to admit. They have indulged critical race theory and its attempt to redefine America and cast any and all political opponents as inherently racist. Their more radical members have even dabbled in anti-Semitism by labeling Israel, a nation where Arabs and Jews alike can vote and stand equal before the law, an “apartheid state”—an insidious way of siding with those who favor the destruction of the Jewish state.

The result so far has been the early onset of inflation, which amounts to a tax hike—one, incidentally, that hurts the poor the most. Gas prices are out of control. Every class of assets in America, especially equities and housing, has been radically inflated by bad policy, setting the stage for crisis. People being paid extra for not working are making the rational choice not to work, impeding recovery. Excessive government spending in 2021 and 2022 may make a recession in 2023 or 2024 a mathematical certainty. Democrats took all of four months to mess up the Middle East. They have even made American cities terrible again thanks to leniency toward criminals, rioters, and looters, although that effort preceded the last election.

But what about the turmoil in the Republican Party, which recently ousted Rep. Liz Cheney (R-WY) from the second-ranked spot its House leadership? The move actually paves the way for better performance from the Republican Party. Some from the old GOP would like to forget about 2016, even if they paid lip service to its verdict during the Trump years. This is exhibited by an unwillingness to obstruct Biden nominees as Democrats did to Trump’s with even fewer Senate seats, a desire by some to rejoin the job-exporting Trans-Pacific Partnership trade deal, and failing to stand up to the woke mob and its corporate adherents.

Here’s the deal: Trumpism isn’t a set of specific policies, but a willingness to fight, a refusal to accept the terms of political debate set by the Democrats and the media, and a realignment of the party toward blue-collar workers. Liz Cheney rejected all of this innovation. She wanted to fight her own party. She wanted to assist Democrats and the media in smearing all Republicans with the January 6 Capitol riot—a move that Senator Minority Leader Mitch McConnell is resisting in refusing to go along with the House bill to establish a commission to investigate it.

Cheney’s replacement, Rep. Elise Stefanik (R-NY), is far from a perfect conservative and has a checkered voting record. But her job in leadership is to fight the Left on whatever opportunistic ground presents itself and put out the messaging necessary for the coming midterm elections. She excels at both. The fact that the GOP can have an open and honest debate—and adopt course corrections in full view of the public—is an asset, not a liability. The extremism of the Democrats, coupled with most Republicans’ desire to retain what is best about Trumpism, forecast successful GOP outcomes in 2022 and 2024. The GOP isn’t about to go extinct. It’s flourishing more than ever.