Trump Revs Up the Battle Over Immigration 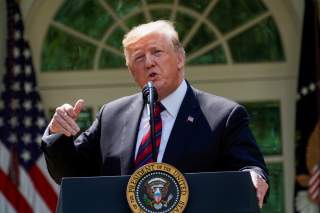 “I think that Kushner and his team did a very good job at bringing together many key areas of President Trump’s immigration proposals from the campaign as well as concerns from the special interest groups and various Senators. The timing is a little strange given the crisis at the border, but he’s been working on this for months,” said Ryan Girdusky, a correspondent for One America News.

The crisis at the border Girdusky references is the massive influx of border-crossings this spring across the U.S.-Mexico border. Both March and April saw over 100,000 migrants enter the United States, the highest rate in over a decade. Estimates believe the numbers could hit 150,000 migrant crossings per month over the summer, totaling over a million by the end of the year. As previously reported at TNI, facilities at the border are overwhelmed by the number of people and are left without the space, manpower, or financing to properly care for an emergency on this scale.

Parts of the Trump administration’s proposal is meant to stem this crisis, including adding over 400 miles of border wall; if passed, this would be in addition to the over 400 miles already being constructed through President Trump’s national emergency declaration in February. It would also reform domestic asylum laws in an attempt to expedite applications, which often finds most border crossers to be economic migrants and not refugees. The proposal makes no mention of Deferred Action for Childhood Arrivals (DACA) or amnesty for illegal immigrants already in the United States.

The heart of the proposal is a turnaround on who the United States accepts as legal immigrants. Currently, two-thirds of new immigrants are granted stay because of some kind of familiar connection already living in the United States; immigration enthusiasts refer to this as family reunification, while immigration restrictionists refer to it as chain migration. Another fifth is admitted on humanitarian grounds, including through the Diversity Lottery. The final 12 percent is admitted on a skills-based rationale and for specific employment opportunities. The new proposal, shepherded by Kushner, would turn these numbers on their head: 57 percent of new immigrants would be admitted based on employment and skill, 33 percent based on family connections, and 10 percent for reasons of humanitarianism. These skills-based applicants would also be judged on their English proficiency and knowledge of U.S. civics.

“Changing the immigration stream to more educated and skills-based is long overdue, and the Barbara Jordan-chaired Commission on Immigration Reform under Bill Clinton recommended steps in this direction a generation ago,” said Scott McConnell, conservative writer and author. “I do credit Trump and his team for addressing the absurdity of family-based immigration, which means that being related to a recent immigrant is the main route toward receiving a visa, nepotism in effect. Canada and Australia both demonstrate there are good alternatives to that; if the Democrats decide to oppose him completely, it will be a very effective issue for Trump in the next election cycle.”

Despite its attempt to reach a compromise between Republicans, Kushner’s proposal has been hammered by right-wing restrictionists since it’s announcement. Unlike the RAISE Act, proposed in 2017 by Senators Tom Cotton (R-AR) and David Perdue (R-GA), which would cut the number of legal immigrants in half, Trump’s proposal doesn’t decrease legal immigration at all, only changing its demographics. “What happened to the total immigration moratorium? We need a break!” tweeted Ann Coulter, who has had a war of words with the president since the start of the year. “Let’s admit only immigrants who will compete with senators, journalists and professors —instead of their landscapers,” she proposed sardonically. Mark Krikorian, Executive Director of the Center for Immigration Studies, wrote in National Review that “Formally embracing the current legal-immigration level of more than one million each year would mean that the GOP, as on so many issues before, would simply be the Democrat-lite party, wanting to go in the same direction, just more slowly.”

Even Scott McConnell, while not as harsh as the other critics, believes the administration is missing an opportunity. “I think Trump also has a mandate at least from his voters to reduce overall numbers, and that would good too—at present we not only have immigrants driving down working class wages but a kind of assimilation crisis, and a long period of low immigration is needed to attenuate that,” he told TNI.

Girdusky has a sunnier disposition towards the proposal, stressing that restrictionists must not let the perfect be the enemy of the good. “I think it’s important that Kushner and his team worked on this given the fact that he is one of the more moderate members in Trump’s White House. I think most importantly it moves the center. For decades we’ve heard that a moderate proposal has to include mass amnesty and increased legal immigration. This bill shows the center has moved and conservatives don’t need to cave on two poison pills in order to achieve common sense reforms.”

Those lack of “poison pills” in the proposal means it won’t be passing a bipartisan Congress anytime soon. Speaker of the House Nancy Pelosi has called the proposal “dead on arrival.” Senate Minority Leader Chuck Schumer said Democrats would not consider any bill that didn’t resolve the outstanding issue of DACA. A bigger question is if the proposal is drafted into legislation, will it receive the votes of the Senate’s fifty-three Republicans? Uniting the GOP around a single immigration proposal would be an accomplishment on its own.