Trump Is Right to Talk to Kim 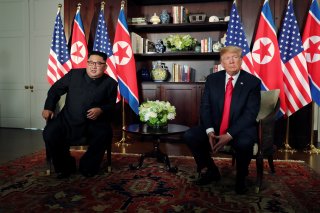 Just two weeks after canceling a visit by Secretary of State Mike Pompeo to North Korea, the Trump administration is entertaining a request from Kim Jong-un for a second summit meeting with the President. However, the fact remains that North Korea has not visibly denuclearized. But its aggressive program of “nuclear” tests and “intercontinental” missile launches ended abruptly after Trump’s January 3 nuclear button tweet, and the Hermit Kingdom has been quiet all year.

To be fair, it probably wasn’t Trump’s tweet that scared the Supreme Leader into submission. American-led economic sanctions have probably been much more effective. But these would not have had quite the same bite if the Trump administration had not strong-armed China into enforcing them.

Trump’s critics claim that by agreeing to the last summit, held in Singapore on June 12, the President gave away all his negotiating leverage over Kim. But if all it takes to defeat a totalitarian dictator is to refuse to shake his hand, then the last eleven U.S. Presidents should long ago have brought democracy to North Korea. It seems hard to believe that North Korea’s true war aim has always been to score a meeting with an American President.

In reality, Trump’s dealings with (and pressure on) North Korea have given the United States and its allies almost a year of peace and quiet on the Korean peninsula. In exchange, America has suspended joint military exercises with the South— military exercises that, to be fair, were explicitly designed to prepare for an attack by the North.

Given that the United States continues to maintain twenty-four thousand troops in South Korea (plus a further thirty-nine thousand offshore in Japan), engages in regular joint training exercises throughout the Pacific, and has a bilateral treaty pledging to defend South Korea against all potential enemies, it seems safe to hold off on annual exercises in order to give peace a chance.

Post-Obama Senate Democrats, who have suddenly become the toughest of hardliners when it comes to North Korea, seem to have forgotten that it was Democratic Presidential candidate Jimmy Carter who in 1976 campaigned on a pledge to withdraw all U.S. troops from Korea within five years. That pledge went the same way as Barack Obama’s pledge to withdraw from Afghanistan.

The truth is that South Korea, with twice the population and anywhere from forty to eighty times the GDP of North Korea, can very well defend itself—all the more so since the South is assured of full access to American battlefield intelligence, naval power, and air support. The only reason South Korea should need American boots on the ground would be if China were to throw its weight into the North Korean war effort, as it did in 1950. That seems extraordinarily unlikely today.

In the final analysis, talk is cheap. Trump is right to give it away, as long as he keeps the sanctions screws tightly turned on North Korea’s economy. The United States has suspended military drills in exchange for North Korea suspending missile and bomb tests. That seems a reasonable trade, all the more so considering that North Korea (not the United States) continues to suffer under crippling economic sanctions.