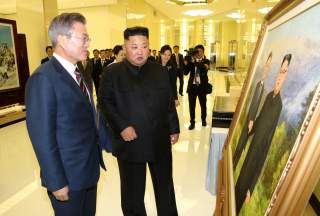 Addressing the McConnell Center at the University of Louisville on Monday, September 24, CIA Director Gina Haspel stated something the vast preponderance of Korea analysts in the United States have generally taken as fact. Haspel warned that North Korean leader Kim Jong-un likely won’t be giving up his nuclear weapons program anytime soon, if ever. Pyongyang views their nuclear weapons stockpile as “essential to their regime’s survival,” Haspel said, so any American effort to separate Kim from those weapons will have to be incredibly appealing.

Apparently, Haspel’s boss, President Donald Trump, didn’t get the memo. More than seven hundred miles away in New York, Trump spoke about a blanket of optimism and promise that usually don’t go hand-in-hand with discussions about North Korea. Reminded by reporters that a year earlier, he threatened to destroy the North if it dared threaten the United States, Trump replies about how great the atmosphere now is. “That was a dangerous time. This is one year later, a much different time.”

A much different time indeed. While North Korea is still a nuclear weapons state that may be producing five to eight bombs per year, the dynamic between Washington and Pyongyang this year is markedly more upbeat. American policy remains unchanged—only through the North’s total and final denuclearization will the country be able to re-enter the community of nations and become an economic participant in the East Asian architecture. But the last nine months, direct diplomacy with the Kim regime is no longer a taboo. That period has seen three meetings between Kim and South Korean president Moon Jae-in and the first summit between a North Korean leader and an American president in history. Furthermore, President Trump deserves some of the credit for breaking the ice and changing the narrative.

However, nuclear talks with North Korea have always been afflicted by timing and synchronization. What comes first, denuclearization or peace and reconciliation on the Korean Peninsula? If denuclearization comes first, which party—the Americans or the North Koreans—is required to provide the first concession? Should the negotiations be comprehensive and resemble a grand bargain which may appeal to Trump? Or should the process be slow and cautious, where confidence is built before big offers are made?

While the South Korean government under Moon would undoubtedly prefer a denuclearized North Korea over a Kim would a nuclear weapon, Seoul’s top priority is avoiding an armed calamity on the Korean Peninsula. With the South Korean capital about forty miles from North Korean artillery, establishing a permanent calm may be even more valuable than bleeding Pyongyang of its unconventional weapons. For Moon, it is simply unrealistic for the United States to expect Kim to give everything up on the front end (unilateral disarmament) when the regime remains forever terrified of forceful, U.S.-led regime change. The North Koreans will not part with their insurance policy unless trust goes up and peaceful relations are established. Moon has spent the year on precisely this objective, signing political understandings and military de-escalation agreements, and letting it be known to the North Korean side that a return to economic normalcy is not far off.

Although the Trump administration has welcomed the inter-Korean thaw, it’s also concerned about the scale and scope of the reconciliation. To Washington, the objective is about dismantling Pyongyang’s nuclear weapons program and ensuring there is a rigorous international inspection regime in place to keep Pyongyang disarmed. A peace treaty with the North, economic normalization, and the exchange of ambassadors can only happen once Kim makes the strategic decision to return his regime into full compliance with Security Council resolutions and not a moment before.

In short, Trump and Moon have the same goal. They just disagree on how to get there. Should denuclearization come before or after reconciliation? This is the million dollar question that could make or break this diplomatic opportunity.

Politically, striking a hard line in the sand would be the easy position for Trump to take. Yet it’s also likely to continue a diplomatic logjam that has persisted since June 12, when Trump and Kim met in Singapore. If the White House remains opposed to any movement on peace and reconciliation until after the North Koreans begin the process of destroying their warheads and letting IAEA inspectors prowl around their declared (and undeclared) uranium enrichment and plutonium facilities, the sixty-five-year old Korean War will never end.

As the saying goes, we should not miss the forest for the trees. Ultimately, peace on the Korean Peninsula is America’s national security objective—denuclearization is merely a way to get there. In the weeks and months ahead, President Trump should wholeheartedly support President Moon’s outreach to Kim Jong-un because inter-Korean harmony is as beneficial to Washington as it is to Seoul and Pyongyang.

If denuclearization is indeed possible, it likely won't take place until years down the road. Making the Korean Peninsula more stable and predictable place can take place right now. To hold the prospects of peace and stability hostage to the ideal of denuclearization would be a lost opportunity and bungling of epic proportions.

Daniel R. DePetris is a columnist for the Washington Examiner and the American Conservative.