Trump Should Model His Foreign Policy After Andrew Jackson 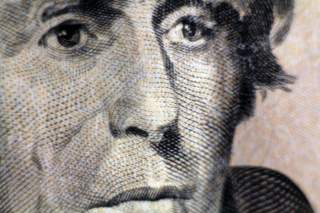 Andrew Jackson’s 250th birthday is on March 15, and he’s back in the White House.

When the Treasury Department announced in 2015 that it was stripping Andrew Jackson’s visage from the front of the $20 bill, almost nobody cared to defend the seventh president.

Jackson was a legendary figure of the nineteenth century, the symbol of an age whose political legacy was often embraced by Americans across the political spectrum. It seemed he was doomed to be forgotten and abandoned.

That’s changed now that President Donald Trump has put Jackson’s painting up in the Oval Office.

Political scientist Walter Russell Mead famously fleshed out the Jacksonian foreign-policy tradition in his influential book, Special Providence. If Trump wants to replicate Jackson’s success, he’s going to have to pay attention to the principles that animated Jackson the statesman.

Jackson, in part, rose to the presidency due to the celebrity he gained through victory at the Battle of New Orleans in the War of 1812. He had a reputation as a fearsome warrior with little official experience in diplomacy or foreign courts.

However, the hero of New Orleans had received a first-rate education in negotiation and diplomacy from his long life in business, local politics and various frontier wars. A practical experience of the world combined with a relentless patriotism on behalf of American interests to drive his foreign policy as president.

“Prepared for War” and Rebuilding the Navy

Jackson famously said in his farewell address: “We shall more certainly preserve peace when it is well understood that we are prepared for war,” a sentiment clearly echoed in Ronald Reagan’s mantra of “peace through strength.”

Though Jackson always claimed to be a follower of Thomas Jefferson and the “old republicans” who were wary of military power, Jackson departed from their school of thought in a few key areas. He still dismissed the need for a permanent standing army, but became a firm believer in the power of the Navy to defend American interests.

United States Naval Academy instructor Claude Berube has noted that Jackson clearly had an expansive view of naval power, which led him to modernize and effectively use the Navy during his presidency.

Jackson said in his farewell address that the Navy would not only protect America’s “rich and flourishing commerce in distant seas,” but enable the United States to “reach and annoy the enemy” at a safe distance from home. Jackson understood that the ability to strike around the globe was critical to defending American interests and rights abroad.

Trump, like Jackson, appears to understand how important a powerful and efficient Navy is to protecting the United States. The Heritage Foundation’s 2017 Index of U.S. Military Strength indicated that American naval power is worryingly insufficient to handle the variety of threats the country may face. Trump has committed to reversing the trend of naval decline.

Trump said in a speech aboard the new aircraft carrier USS Gerald R. Ford that the United States must rebuild its Navy to “give the men and women of America’s armed services the resources [they] need to keep us safe.”

Americans stuck by Jackson through thick and thin because they believed he would always stand up for them. Old Hickory was “one of us,” and never failed to defend the nation he unquestionably knew was the greatest in the world.

One of Jackson’s biggest tests as commander in chief came over American “spoliation” claims against France that dated back to a previous conflict between the two nations. Jackson was able to secure a treaty with France to pay for property damage that had been incurred during the war. This treaty had eluded American presidents for thirty years, and it was a sign of growing respect for American strength and leadership that Jackson had secured it.

However, when France waffled on the deal and threatened to delay payment, Jackson sprang into action and demanded they follow the terms of the treaty. Taken aback by the response of an American president seemingly willing to go to war over a seemingly trivial matter, the French demanded an apology from Jackson.

Old Hickory wouldn’t back down, and delivered a message to Congress calling for immediate military preparation. Though he said he meant no offense to France they would get “no apology.”

“The honor of my country shall never be stained by an apology from me for the statement of truth and performance of duty,” Jackson said in his address.

As in many other moments in his life, Jackson had “shoot” in his eyes. The French knew this angry, flag-waving American meant business, so they backed down and paid up.

Historian John Fiske wrote, “The effect of Jackson’s attitude was not lost upon European governments, while at home the hurrahs for ‘Old Hickory’ were louder than ever. The days when foreign powers could safely insult us were evidently gone by.”

Through his actions, Jackson was able to secure more respect from foreign nations which had often treated the new country with contempt. Building “respect” for the United States will undoubtedly be a major issue for Trump.

Like Jackson, Trump says he will refuse to apologize to foreign powers.

In a jab at former President Barack Obama, who was accused of going on an “apology tour” during his presidency, Trump said at a campaign rally, “Instead of an apology tour, I will proudly promote our system of government and our way of life as the best in the world.”

“We will show the whole world how proud we are to be American,” Trump continued.

If Trump wants to replicate Jackson’s success, he must defend American strength and honor abroad. It’s clear that foreign nations are testing him in the early days of his presidency. It is important for Americans to know that the president is on their side and will defend American interests.

Jackson rarely had to use his military and kept the United States out of major wars during his presidency, but he did occasionally use the Navy to defend American rights abroad.

The most dramatic incident came when an American merchant ship trading goods in the Sumatran port of Quallah Battoo was attacked by a group of pirates, who were clearly acting with the sanction of local authorities. The pirates killed several merchants, stole thousands of dollars in goods, and destroyed the ship.

The attack was in part provoked by the fact that the residents of Quallah Battoo almost never saw American warships and believed ships flying the American flag were easy prey for predation. This didn’t sit well with a man like Jackson.

Jackson said a “daring outrage” had been committed against Americans, but given that local warlords essentially ruled the port, he wouldn’t resort to standard diplomacy as if dealing with an organized nation-state. In a message to Congress, he said that the perpetrators belonged “to tribes in such a state of society that the usual course of proceedings could not be pursued.”

Jackson unleashed the Navy to give them “a good thrashing,” as his Navy secretary said.

The Sumatrans learned their lesson and stayed clear of raiding American ships.

Trump has also used such language in describing enemies who do not adhere to “civilized” war.

In his speech to a joint session of Congress, Trump used Jacksonian language to describe the Islamic State as “a network of lawless savages that have slaughtered Muslims and Christians, and men, women, and children of all faiths and beliefs.”

This was language many Americans were waiting to hear after years of mealy-mouthed descriptions of generic “terrorism” or “overseas contingency operations.”

Also, while it remains to be seen whether he will follow through, Trump, like Jackson, has committed to wiping out those who violate the rights of Americans and harm our nation’s interests, instead of trying to fundamentally change them or bring them democracy.

As Walter Russell Mead wrote, Jacksonian foreign policy is not just about winning battles, it’s about showing the enemy that resistance is futile and catastrophic: “Everyone in the enemy nation had to understand that further armed resistance to the will of the American people—whatever that might be—was simply not an option.”

America cannot fight an asymmetric war proportionally—our enemies must know that if this country is trifled with, the president won’t hesitate to use force.

If Trump really wants to follow in the footsteps of Jackson, he will have to generally follow these principles. He must rebuild the Navy to better protect American interests in an increasingly hostile world, defend the honor of his country at home and abroad, and focus on wiping out threats rather than nation building.

Image: Andrew Jackson's face as printed on a $20 bill. Flickr