Trump Should Not Trust North Korea 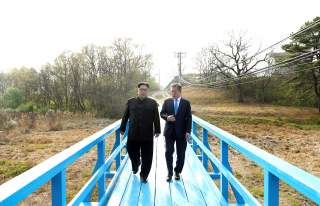 Did Kim Jong-un win the summit in Panmunjom? It helps to remember that in North Korea’s own “guerrilla state” narrative, survival itself counts as victory.

Watching the inter-Korean summit today, one was left left with the feeling that Kim Jong-un had had multiple opportunities to make mistakes, but he survived intact. Apart from a slight bout of adrenaline-rich heavy breathing after his brisk walk with South Korean president Moon Jae-in and an unmistakable smoker’s cough before signing an inscription promising a new historical era had begun, he showed no signs of physical fatigue or that he would be anything but North Korea's leader for the next four decades—potentially.

He brought a number of surprises with him, though, brandishing his young wife as a diplomatic player and dynastic symbol in her own right is no longer novel. More interesting was his statement of thanks to the group of journalists covering the event. It might bear noting that his own Party newspaper, Rodong Sinmun, had smashed Japanese broadcaster NHK the prior day for its “disrespect” for Kim Jong-un. The dictator may have had nice words for the press today, but his presence is accompanied with ample reminders to South Korean media outlets that they need to stay in line.

Naturally, from an American viewpoint the question “will they or won't they” denuclearize looms largest. South Korea has gone out of its way not to antagonize the North, ending the joint U.S.-ROK military exercises the day before the summit, treating the Kim regime like more or less a normal government, not pressing it on human-rights issues in public, and dampening voices by defectors who might be critical of the regime. Seoul’s promise to prevent the sending of leaflets in balloons north over the border starting on May 1 is one such concession where North Korea’s sensitive norms on free speech have crept, if mildly, into South Korean territory.

How Kim will use his newly won international political capital to adjust the country’s nuclear doctrine is a question that can only be speculated about. His pledge at Panmunjom to move toward “phased denuclearization” has to be viewed in tandem with his April 20 policy statement in Pyongyang. That is when, surrounded by his black-clad Workers’ Party cadre, Kim made clear that North Korea was making statements as a de facto nuclear state that had the capability of striking the United States with various means. North Korea has no intention of walking away from—or walking back—that capability and hard-won technical expertise in the short term. And the North Koreans are no strangers to statements of intent with respect to dialing back their nuclear weapons programs, particularly when more food, fuel, and economic aid might be on tap.

This is where the role of the small people-to-people exchanges laid out at the summit may play an important role. The agreed upon family reunions slated to occur on August 15 are, in part, just symbolism. After all, Pyongyang could open the floodgates next week if its capacity for surveillance and control of even the most elderly citizens would allow it to do so. And the symbolism of engagements planned for June and more joint sporting teams also have little apparent bearing on the nuclear negotiations. But, to use a term made unpopular by now-impeached South Korean president Park Geun-hye, these small stepping stones will allow for the justification to both internal and external constituencies that trust can be built and extended.

Finally, the Chinese Communist Party was quiet about its role in helping to create the architecture for today’s event, but it will be doing its best to keep North Korea at the table with the South. Beijing does not want to see a war on its doorstep and, while Party intellectuals and local border police in Yanbian are thinking about new adjustments to China’s dealing with the refugee issue, the country will remain solidly at North Korea’s back—but not without conditions. Kim Jong-un has been busy enough dealing with Moon and Trump (and the surprise Pompeo visit to Pyongyang) and the Olympic diplomatic sprint. On top of that, he spent probably two days dealing with an angry Chinese ambassador and a lot of dead Chinese tourists, not only personally managing the situation but also how it was depicted in the news media—all this about forty-eight hours before the summit. That indicates the value in the difficulty of the relationship with China for North Korea.

Adam Cathcart is a lecturer in at the University of Leeds. He specializes in Chinese history. He is also the editor of the British Association of Korean Studies Papers.