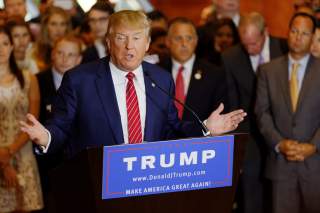 Donald Trump didn’t just beat Hillary Clinton, he also defeated the left-wing news media—by exposing its prejudices and taking his case directly to the American people. He can continue this success into his presidency by modernizing the flow of news and disintermediating the elitist Beltway press.

To say that the media is biased and deceitful is to say that the sun rises in the east—a truism that is apparent to the vast majority of Americans, of whom only 32 percent have "a great deal" or even just "a fair amount" of trust in the media according to Gallup.

That small amount of trust has probably declined since the poll was taken in September. Subsequently, Wikileaks revealed that a CNN employee tipped off the Clinton campaign about multiple presidential debate questions. An ABC News moderator, Martha Raddatz, jumped into a debate on behalf of Clinton. The Atlantic, which supposedly has a “moderate worldview,” ran a story asking, "Why is Hillary Clinton So Widely Loved?" And CNN senior media reporter Dylan Byers defended media bias outright, approvingly quoting a delusional but revealing former NPR boss who said, “Journalists have been unburdened from their adherence to blanket neutrality that we lived with before Trump came along."

Since the election, the media has had much to say about “fake news,” and remarkably isn’t referring to their own anti-Trump product. The Washington Post’s big story about supposed Russian propaganda and fake news has turned out to be fake news itself.

Trump has prevailed despite this bias. But far from being chastened, the left-wing media is out for blood. And the traditional tools a White House and its government agencies use to disseminate information heavily favor incumbent media outlets like these.

Take for example the inhabitants of the 49 seats in the White House press room. Conservative and libertarian perspectives are rare. As a former presidential spokesman recently observed, the occupants are determined by the White House Press Association—essentially a guild. Like all guilds, it defends the status quo. Furthermore, despite social media and technology changing the media, the basic news conference format the executive branch uses to get information to the public is stuck in the era when TV news first matured—basically the early 1960s.

The Trump administration should use technology to reach the public with fewer or no middlemen. Why continue to advantage an incumbent press corps that hates the incoming president and has no intention of giving him a fair shot?

White House and agency spokesmen could use technology like Google Hangouts to hold video press conferences where local correspondents from around the country and independent media are on an equal footing with the Beltway reporters. The president and senior officials could address issues of importance to the public in video distributed by Facebook Live and YouTube.

The White House could gradually replace its physical briefing room with a virtual one, enabling more diversity in media by lowering the barriers to entry of covering the administration. The 49 press poobahs could still be invited back when it’s deemed useful, but they would no longer have the competitive advantage of the White House as a backdrop for their daily propaganda.

More important still, spokesmen could take questions from normal Americans in addition to journalists. Google recently retired its experimental Moderator service, but its better attributes, which allowed the audience itself to rank questions, could be put to good use. Imagine a press conference where the questions elicit information that is important to the public, rather than “gotcha” questions about inside-the-Beltway obsessions.

The Obama administration went through the motions of a direct interface with the public with its petition web site, but the steps we advocate would actually allow grassroots support for change to propel new policy.

President Trump should also take pains not to disengage from the public with which he connected so successfully with a combination of candor and technology. He and his cabinet should take government on the road outside of Washington. They should spend time conversing with average Americans in flyover country, especially states like Michigan, Pennsylvania and Wisconsin where the elitist media ignored or scorned the concerns of voters. Keep doing rallies. Conduct press conferences with local media and do town hall meetings and debates where high school students ask questions — they’re far more likely to reflect parents’ real concerns than the elite progressive media.

It’s time for radical change. Journalism has collapsed to such a degree that even some prominent liberals have become embarrassed. Outgoing White House staffer Ben Rhodes, who spoon fed an eagerly gullible White House media the Benghazi cover-up and Iran nuclear deal fiasco, told a New York Times Magazine interviewer earlier this year that many White House reporters “literally know nothing.” Rather than feed this beast, the Trump White House and its agencies should work toward a more democratic media that doesn’t help progressive elitists mislead voters. Doing so is crucial for the success of the Trump presidency—and the health of our republic.

Newt Gingrich was Speaker of the House of Representatives from 1995 to 1999. He is the author of the new novel Treason.

Christian Whiton was a State Department deputy special envoy from 2003 to 2009. He is the author of Smart Power: Between Diplomacy and War.