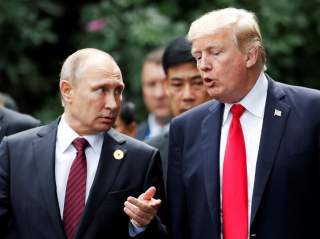 Members of America’s foreign policy establishment are encouraging the White House to adopt more confrontational policies towards Moscow. One policy suggestion that would increase confrontation would be to include more countries on Russia’s border in America’s security alliance known as the North Atlantic Treaty Organization (NATO). Doing this would turn Russia into an enemy. Such as decision would be myopic, short-sighted, and ultimately harmful to American interests.

In a National Journal article, James Kirchik dismissed the argument that many in both Washington and Moscow believe NATO expansion contributed to the deterioration in relations between both countries. Kirchik referred to that belief as "the false claim that Western leaders” in the early 1990s “promised their Soviet counterparts that NATO would refrain from incorporating new members.”

In a Defense One article earlier this week, the Heritage Foundation’s Luke Coffey wrote, “U.S. and European policymakers say one of the biggest concerns about admitting Georgia to the alliance is Russia’s occupation of the country’s Tskhinvali region and Abkhazia. If Georgia joined NATO, the theory goes, the treaty’s Article 5 mutual security guarantee,” he continued, “would immediately require members to go to war against Russia.”

It should be a concern to every American that foreign policy leaders openly advocate extending NATO membership to volatile nations on Russia’s border, knowing that doing so might suck the United States into an unnecessary and destructive war with another nuclear power.

A military alliance should only A) be entered into by the United States when doing so is necessary to ensure American security, and B) alliance membership should only be extended to members who's entry will increase the safety of the United States. Extending NATO membership to Georgia—or Ukraine, as others advocate—in no way strengthens U.S. security, but rather unequivocally increases America’s strategic risk.

Other than its powerful nuclear force, Russia poses no threat to America. The U.S. nuclear triad assures that Russia will never use any atomic weapon against the United States because they are guaranteed to be annihilated in retaliation. Furthermore, Russia's conventional armed forces, while improving, are no match in any sustained engagement with either the U.S. Armed Forces or even against Europe's combined armed forces. The fact is that the cumulative strength of NATO is far, far greater than Russia.

Deterrence should remain Washington's policy towards Russia. In every rational way, deterrence works. It has worked for seventy-five years, it works today, and it will work into the future. Whether one wants to consider the Soviet Union, Mao's China or today's North Korea, America's powerful conventional and nuclear deterrent has and will keep us safe for the foreseeable future.

Threatening Russia, China, North Korea, or Iran with aggressive actions, expanding military alliances near their border, or being open to preventive attacks on them will not improve America’s national security. The truth is that no threat or aggressive action towards America’s rivals will strengthen America’s ability to prosper as a nation.

Besides, while China is a competitor, America has much to gain by keeping its focus on economic development (while again, recognizing Washington’s strong military deterrent will ensure America’s security). North Korea and Iran, while historically antagonistic to the United States, can also be permanently deterred without resorting to war. Moreover, both regimes can be contained without damage to U.S. economic and security interests.

The world is a sometimes violent, unstable place and America’s global interests must be protected and America’s ability to prosper safeguarded. The U.S. Armed Forces are a powerful and capable instrument that can—if wisely used—ensure U.S. security and prosperity into perpetuity.

If the U.S. goes in search of enemies, unnecessarily antagonizes its competitors, and tries to solve political problems around the globe with lethal military power, America may unwittingly harm its national security in the process.

It is time to refocus American policy to avoid the unnecessary antagonism of competitors, to ensure prosperity for future generations. Washington should seek to maintain a world-class deterrent while ensuring U.S. participation in alliances serve American interests—not place those interests at higher risk.