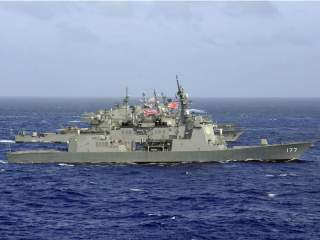 Donald Trump says that he wants to “make America great again.” If that’s the case, why has he continuously lambasted Japan, the United States’ most important military and economic partner in the world’s most important region? Trump regularly condemns Japan for both its economic and military policies. He is wrong to do so.

In Trump’s worldview, Japan is one of a handful of countries—he also regularly mentions China and Mexico—that have taken advantage of the United States and have left middle-class Americans worse off. “I’ll bring back our jobs from China, from Mexico, from Japan, from so many places,” he said, announcing his candidacy in June 2015. While Trump has directed more attention towards China than towards Japan, this tendency to lump China and Japan together fundamentally misconstrues the U.S.-Japan relationship. The reality is that America’s and Japan’s economic interests may be more closely aligned than ever before.

Since the end of their acrimonious trade disputes in the mid-1990s, Japan and the United States have increasingly found themselves on the same side of major economic issues. This was true during negotiations for the Trans-Pacific Partnership, when, with the exception of disputes over Japan’s agricultural tariffs and U.S. automotive tariffs, the two countries were united on most of the agreement’s chapters. Similarly, in their relationships with China both countries worry about Chinese trade practices, copyright piracy and the impact of China’s rise on domestic manufacturers and workers.

Indeed, while Trump laments job losses overseas, Japanese leaders have spent two decades fretting about the “hollowing out” of Japan’s manufacturing sector following years of an overvalued currency and China’s entry into the global economy. Ironically, this benefited the United States: as of 2012, Japan’s stock of foreign direct investment in the United States was second only to the United Kingdom’s. Far from “stealing” jobs from Americans, Japanese automakers have built factories across the United States, directly employing thousands of American workers. Yes, Japan still runs large trade surpluses with the United States, but it is hard to argue that this is due to currency manipulation: Japan continued to run large surpluses even in years when its currency was overvalued against the dollar.

Trump similarly distorts the nature of the U.S.-Japan security alliance. “If Japan gets attacked, we have to go to their defense and start World War III,” he said in a stump speech on February 8. “If we get attacked, Japan doesn’t have to do anything.” While Mr. Trump is correct that Japan is not obligated to defend the United States according to the U.S.-Japan Mutual Security Treaty, he ignores the strong security relationship built on decades of trust. Crucially, he ignores more than two decades of change that have not only seen Japan take more responsibility for its own defense but also that of the United States, even if Japan is not attacked. He also ignores Japan’s willingness to host about fifty thousand U.S. troops and military assets—including America’s only forward-deployed carrier strike group—and the fact that Japan pays over $2 billion annually towards their presence.

Trump is right that these troops defend Japan, but thanks to Japan’s willingness to host so many U.S. troops, the U.S is capable of projecting power in the region, enabling it to respond to regional contingencies, deter adversaries and reassure allies of American resolve. Unfortunately, Trump does not seem to appreciate the extent to which the U.S. military presence in Asia depends on Japan’s willingness to support it.

It is difficult to know how Trump would deal with Japan in office. It is possible that he will see Japan’s value as a partner in pushing back against China. But if he were to pressure Japan too hard, it could have disruptive effects on the U.S.-Japan relationship and complicate U.S. policy in Asia. A return to the acrimonious trade and currency disputes of the past, for example, would make it difficult for the United States and Japan coordinate their response to China’s efforts to change Asian economic governance.

Meanwhile, depending on what Trump means by a more “fair and equitable” security relationship, and how he would go about attaining it, Japan could curtail its contributions to U.S. forces in Japan or call for a revision of the Status of Forces Agreement. If he tried using America’s nuclear umbrella as leverage, it could lead Japan to question American commitment and therefore dramatically expand its own armed forces and perhaps consider nuclear weapons, which would destabilize Northeast Asia and undermine the nuclear nonproliferation regime the United States supports. Allies should criticize each other when appropriate, but it is difficult to see how the U.S.-Japan relationship will be improved—or Americans made safer or more prosperous—by critiques that fundamentally mischaracterize the relationship.

The next president will have to deal with the regional and global consequences of China’s slowing economy. Likewise, he or she will have to respond to China’s growing military and increasing assertiveness in the maritime domain. The United States will need all the friends it can get, particularly trustworthy friends like Japan, with which the United States shares both interests and values. Maybe Mr. Trump’s Japan bashing makes for good sound bites, but it is unjustified by the facts, and if realized, it would do little more than disrupt a critical U.S. relationship in a critical region at a critical moment. U.S. leadership cannot be about getting the best possible deal for Americans at the expense of beggaring American allies and partners; it has to be about creating the conditions in which all can be secure and prosper. Only that will ensure that America is great.