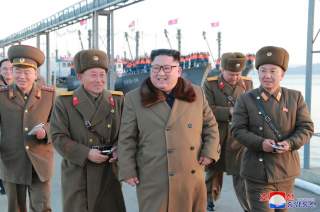 Following the Singapore summit, President Donald Trump unilaterally decided to end allied “war games” (a North Korean derogatory term, previously rejected by Washington and Seoul) on the Korean Peninsula. That decision has been the gift that keeps on giving…for North Korea.

The latest iteration of the gift came Friday with the announcement that next spring’s U.S.-South Korean Foal Eagle combined exercise is canceled. That makes at least eight military exercises scrapped by Washington and Seoul since the Singapore meeting. And that’s a problem.

Exercise cancellations have consequences. It directly affects interoperability. In the short term, you can minimize the impact with computer-based exercises and low-level exercises, but over time interoperability degrades.

There should be a limit to how long America cancels exercises without some tangible progress on denuclearization. Given the turnover of U.S. military personnel in Korea, a year is probably the limit on how long cancelations should continue without any diplomatic progress. Otherwise, a majority of U.S. military personnel in Korea will have no experience in large-scale combat operations with South Korea.

While the allies have risked degrading their deterrence and defense capabilities, Pyongyang has not responded in kind. The regime has not canceled any exercises since Singapore. Just this week, it launched its annual Winter Training Exercise. North Korea’s conventional threat to South Korean and U.S. troops stationed there remains undiminished.

Of course, allied military exercises have been curtailed to improve the atmosphere for denuclearization negotiations with the North. However, those talks have yielded no progress and are currently at a standstill. Pyongyang canceled the last scheduled meeting with Secretary of State Mike Pompeo and has not accepted subsequent, repeated invitations to meet with Special Envoy Stephen Biegun.

This lack of progress is what National Secretary Advisor John Bolton cited as President Trump’s reason for wanting to engage in a second summit with Kim Jong-un in early 2019. Moreover, Vice President Mike Pence recently announced that the United States would no longer insist that North Korea provide a data declaration of its nuclear and missile programs as a quid pro quo for a second summit.

Since committing to “work toward complete denuclearization of the Korean Peninsula,” Pyongyang has not paused in augmenting its nuclear and missile arsenal. Instead, the regime has expanded and upgraded its production facilities for fissile material. Furthermore, it has done the same with nuclear warheads, reentry vehicles, missiles, mobile missile launchers and mobile missile deployment sites.

Meanwhile, the Trump administration has moved away from its “maximum pressure” policy. President Trump stated he longer wants to use the term because “we are talking so nicely” to North Korea. In June, he announced that, despite previous warnings to the contrary, America would not impose new sanctions on three hundred North Korea entities. Nor has the White House taken action against twelve Chinese banks that Congress assessed had violated U.S. laws. While the United States imposed $9 billion in fines on European banks for money laundering for Iran, Washington has yet to impose any penalty on a Chinese bank for facilitating prohibited North Korean programs.

Investment bankers will counsel that “past performance is not an indicator of future results.” So, the failure of eight previous international agreements with North Korea on its nuclear and missile programs doesn’t preclude trying again with a new North Korean leader. But Washington should at least learn from past mistakes.

Going forward, the administration should insist on a comprehensive, carefully crafted accord that delineates requirements and a robust verification protocol. And it should heed a timeless military lesson, as well: Don’t prematurely lower your shields.

Lieutenant General Thomas Spoehr (ret.) is director of the Heritage Foundation’s Center for National Defense and previously served for over 36 years in the U.S. Army.