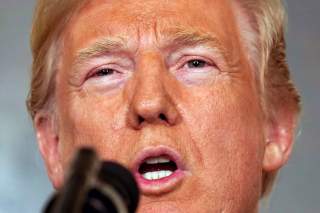 President Trump informed the nation Friday night that, after a week’s worth of consideration and speculation, he had instructed the U.S. military to carry out strikes against regime targets in Syria -- in tandem with the United Kingdom and France.

It was a week in which the president pardoned the prominent neocon and former Dick Cheney adviser I. Lewis “Scooter” Libby, feuded with former FBI Director James Comey, welcomed John Bolton, bombed a Middle Eastern country and declared “mission accomplished.”

As I’ve previously reported, the president in taking military action risks portions of his populist, nationalist base. That hasn’t changed. Quite the contrary.

A source close to Steve Bannon says he, too, opposes the strikes.

More fringe personalities, such as Alex Jones and Stefan Molyneux, have denounced the strike in vociferous terms. Jones, the founder of Infowars and a conspiracy theorist, publicly wept over Trump’s action and lamented, “He’s crapping all over us it makes me sick.” The disappointment was compounded by the fact that as late as Friday afternoon, many in this contingent inferred that plans to strike Syria imminently had been scuttled--in part because of a pressure campaign, from the president’s core supporters.

Friday afternoon, U.N. Ambassador Nikki Haley said the president had not yet made a decision.

Others close to the president and popular on the Right, including Sen. Tom Cotton, not only cheered the decision but also encouraged Trump to keep going elsewhere.

“The Butcher of Damascus,” Cotton said in a statement. “Learned two lessons tonight the hard way: weapons of mass destruction won’t create a military advantage is done with you and Russia cannot protect its clients from the United States.”

“President Trump ought to sustain the attacks if Assad doesn’t learn these lessons, and Iran’s ayatollahs and Kim Jong Un might to learn the easy way,” Cotton said.

Trump garnered Democratic support, as well. Liberal hawks were exultant. Former Ambassador to Russia Michael McFaul signaled his approval on twitter. Others agreed. "The Assad regime's brutality cannot go unanswered,” said Sen. Jeanne Shaheen of New Hampshire, while caveating: “I support these air strikes, done in coordination with our allies, but remain adamant that the administration must develop a comprehensive strategy for ending the Syrian civil war.”

“A perfectly executed strike last night. Thank you to France and the United Kingdom for their wisdom and the power of their fine Military. Could not have had a better result. Mission Accomplished!” Trump tweeted Saturday morning.

Sources inside the Pentagon and in the White House indicated days of disagreement over what exactly the U.S. should do in response to the latest atrocities out of the war-torn Middle Eastern country.

James Mattis, secretary of defense, was more cautious about the strikes than the president and his new national security advisor, John Bolton.

“Our mission stays the same. It’s to defeat ISIS. But Assad’s actions were beyond the pale,” the Department of Defense said on Saturday.

Most Western countries have faulted Assad for a recent chemical attack in a Damascus suburb, though his benefactors Russia and Iran, have strenuously denied his involvement.

Russia repeatedly floated the accusation that the United Kingdom was involved in framing Assad, in comments at the United Nations this week. On Saturday, the Russian delegation in New York introduced a draft resolution that condemns “the aggression against the Syrian Arab Republic by the U.S. and its allies in violation of international law.”

“We are being threatened. We warned that such actions will not be left without consequences. All responsibility for them rests with Washington, London and Paris,” said Russian Ambassador to the U.S. Anatoly Antonov on Friday night.

Trump singled out Russia and Iran in his White House address on Friday. His core supporters will be watching closely to see if he continues to move closer towards traditional neocon and liberal hawk positions or not.