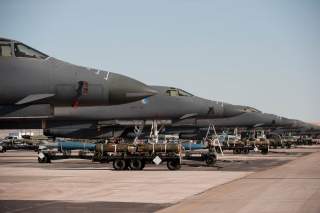 The United States,together with its allies the United Kingdom and France, struck the Syrian regime of Bashar al-Assad with a massive air and missile strike in retaliation for an on April 7 chemical weapons attack on the town of Douma.

The massive one-off allied air strike was aimed at degrading the Syrian regime’s chemical weapons arsenal while simultaneously avoiding collateral damage to civilians as well as Russian and Iranian forces that are also operating inside Syria. The Pentagon took pains to avoid targeting Russian forces inside Syria because of the danger of escalation into open warfare with a rival nuclear-armed great power.

U.S. President Donald Trump told the nation that he ordered the attack because of Douma and what he called a “pattern” of the use of chemical weapons by the Syrian regime. Trump described the attack in stark moral terms that were reminiscent of the rhetoric that the George W. Bush administration employed before the 2003 Iraq War to describe Saddam Hussein. “This massacre was a significant escalation in a pattern of chemical weapons use by that very terrible regime,” Trump said during a televised address on the night of April 13. “The evil and the despicable attack left mothers and fathers, infants and children, thrashing in pain and gasping for air. These are not the actions of a man; they are crimes of a monster instead.”

“The purpose of our actions tonight is to establish a strong deterrent against the production, spread, and use of chemical weapons,” Trump said. “Establishing this deterrent is a vital national security interest of the United States. The combined American, British, and French response to these atrocities will integrate all instruments of our national power—military, economic, and diplomatic. We are prepared to sustain this response until the Syrian regime stops its use of prohibited chemical agents.”

U.S. Defense Secretary James Mattis, who was widely reported to be wary of intervention and the dangers of escalation in Syria, said that the United States focused its efforts strictly on degrading the Syrian regime’s chemical weapons complex. The Pentagon took pains to avoid civilian casualties or hitting foreign—Russian and Iranian—forces operating in Syria so as not to escalate the conflict. “I want to emphasize that these strikes are directed at the Syrian regime,” Mattis said. “In conducting these strikes, we have gone to great lengths to avoid civilian and foreign casualties.”

“This evening we conducted strikes with two allies on multiple sites that will result in a long-term degradation of Syria's capability to research, develop and employ chemical and biological weapons,” Dunford said. “Important infrastructure was destroyed, which will result in a setback for the Syrian regime. They will lose years of research and development data, specialized equipment and expensive chemical weapons precursors. The strike was not only a strong message to the regime that their actions were inexcusable, but it also inflicted maximum damage, without unnecessary risk to innocent civilians.”

Russian forces did not engage the incoming Allied air strikes, but the Pentagon went to great lengths to avoid hitting Moscow’s forces. Indeed, while the Pentagon did not forewarn or coordinate with Moscow, the United States used its bilateral deconfliction line to ensure that there were no unintended clashes with Russian forces. “We specifically identified these targets to mitigate the risk of Russian forces being involved, and we used our normal deconfliction channels—those were active this week—to work through the airspace issue and so forth,” Dunford said. “We did do not do any coordination with the Russians on the strikes, nor did we pre-notify them.”

Syrian forces, however, attempted to intercept the incoming strike to the best of their limited ability. “The only reaction that I'm aware of at this time was Syrian surface-to-air missiles,” Dunford said. “I happened to be down in an actual command—military command center and was aware of that activity. I'm not aware of any Russian activity, and I'm not aware of the full scope of the Syrian regime response at this time.”

Indeed, Damascus’ forces claim to have shot down 13 incoming missiles according Syrian state television. However, given the degraded state of Syria’s air defenses, these claims are extremely dubious. At the time of the Mattis and Dunford briefing, the United States was unaware of any casualties suffered by allied forces. “We want to give you a full brief in the morning. Right now, we have no reports of losses,” Mattis said.

While the United States and its allies will strike at the Syrian regime again if it uses chemical weapons in the future, for now, the strikes are over. “That will depend on Mr. Assad, should he decide to use more chemical weapons in the future,” Mattis said. “And, of course, the powers that have signed the chemical weapons prohibition have every reason to challenge Assad should he choose to violate that. But right now, this is a one-time shot, and I believe it has sent a very strong message to dissuade him, to deter him from doing this.”

Setting aside the matter of if the United States has any vital interests in Syria, there is already rigorous debate over the legality of the U.S.-led airstrikes, which did not have the approval of the U.S. Congress. While some Democratic and Republican lawmakers are adamant that Trump should have secured Congressional approval for the strike, others are equally adamant that the attack was lawful—insofar as domestic law is concerned.

Virginia Senator Tim Kaine (D-VA) was one lawmaker who opposed Trump’s strike on Syria—noting that only Congress has the power to authorize the use of force except in cases of self-defense. "President Trump's decision to launch airstrikes against the Syrian government without Congress's approval is illegal and — absent a broader strategy — it's reckless,” Kaine said in a statement. "Today, it's a strike on Syria — what's going to stop him from bombing Iran or North Korea next? The last thing Congress should be doing is giving this president a blank check to wage war against anyone, anywhere."

Michigan Republican Congressman Justin Amash agreed. “These offensive strikes against Syria are unconstitutional, illegal, and reckless,” Amash said in a tweet. “The next speaker of the House must reclaim congressional war powers as prescribed in Article I of the Constitution. @SpeakerRyan has completely abdicated one of his most important responsibilities.”

Other lawmakers from both sides of the aisle praised Trump’s actions. Florida Democratic Senator Bill Nelson was among those who supported the attack. “I support the attack because Assad must be held accountable for the use of chemical weapons,” Nelson said in a tweet.

Arizona Republican Senator John McCain applauded the strike on Syria, but decried what he viewed as the lack of a comprehensive strategy. “I applaud the President for taking military action against the Assad regime, and I am grateful to our British and French allies for joining us in this action,” McCain said in a tweet. “To succeed in the long run, we need a comprehensive strategy for Syria and the entire region.”