Trump Takes a Gamble on Davos 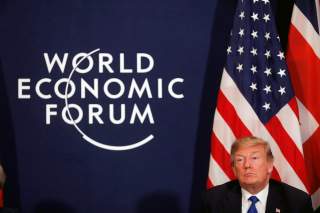 President Donald Trump’s visit to the World Economic Forum in Davos represents one of his most audacious gambles. Having, during his presidential campaign and first year in office, fulminated against the pro-globalization mindset that characterizes this gathering, and taken pleasure in taking aim at the verities professed by the leaders and financiers at this conclave (among them the sacrosanct importance of free trade, the need to lower barriers and the threat of climate change), Trump believes he is presenting the world with an offer it can’t refuse: the opportunity to get in on the ground floor of a new relationship with a rejuvenating America.

Back up for one moment. Last year, in the wake of the surprise defeat of Hillary Clinton, whom everyone—even the Russians—expected would be occupying 1600 Pennsylvania Avenue, the mood at Davos was one of uncertainty. If the United States was now under the direction of a president who seemingly rejected the country’s bipartisan foreign-policy consensus about the desirability of expending U.S. power and resources to maintain the liberal international order, and was preparing to turn inward to focus on “America First,” who would pick up the mantle of defending and extending globalization? German chancellor Angela Merkel was already nominated as the de facto head of the Western alliance, while Chinese president Xi Jinping chose to make his debut on the Davos stage to propose China’s new leading role as the central engine of the global economy.

Several things have happened since them. Many members of the populist/anti-Davos wing of the Trump campaign, who eagerly took key White House positions prepared to reshape American foreign policy, have already departed. Trump surprised many—including among his own electorate—by changing his position on a number of issues, notably to approve a modest “surge” of U.S. forces in Afghanistan. And while Xi has won plaudits for his rhetorical defense of the precepts of the liberal global order, Chinese behavior continues to reinforce doubts as to the desirability of having Beijing at the center of the global system.

So, in essence, Trump is offering a new deal: American-led globalization with Trumpian characteristics. It is a more mercenary, nakedly transactional approach: you want American power and leadership to preserve and sustain the liberal order on which you depend? Then here’s the price tag: more exceptions for the United States from global rules and, in keeping with Trump’s campaign rhetoric, a renegotiation of the terms of American participation and support, to shift costs and burdens to other participants. Don’t want it? America is fine “going it alone”—and you can take your chances with Beijing.

In some ways, Trump views U.S. leadership of the international system as a business that has transferred hands from one manager to another. Under previous administrations, the United States issued a number of offers and discounts to interested parties. Trump has signaled that the United States is now under new management, and that previous inducements may not longer be honored in full by the current team, but that there is a possibility of gaining some partial credit if one is willing to accept revised terms of service. This model, familiar to anyone who owns a mobile-phone plan or belongs to a wholesale club, is now being applied at the international level.

One of the key features of the message of the U.S. delegation to Davos is that other countries can consider the benefits of a direct bilateral tie to the United States. But there is a price: another country cannot attempt to leverage its multilateral connections to compel the United States to accept rules or obligations that it does not desire to undertake.

Trump’s gamble is that the U.S. market—and U.S. leadership—remains too attractive to too many states. Yes, there will be grumbling, but in the end, he expects most countries will take the revised offer. The next year will indicate how accurate that assessment will turn out to be.