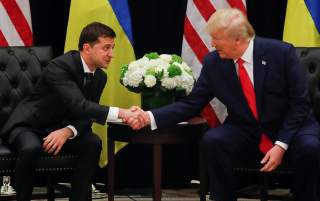 Less than a week into the House of Representatives’ impeachment inquiry, the State and Justice Departments are already being connected to the Trump-Zelensky phone call that begat the controversy.

The Wall Street Journal reported yesterday that Secretary of State Mike Pompeo was on the phone call in July. Pompeo has ignored questions about his involvement and what he knew up to this point, only making a statement disagreeing with the release of the call transcript.

While Pompeo is keeping mum, President Donald Trump’s other diplomatic envoy is not. Former New York City Mayor Rudy Giuliani, now Trump’s personal attorney, has been very vocal about the State Department’s involvement in his discussions with the Ukrainian government. Giuliani met with Ukrainian officials in Spain over the summer to discuss information pertaining to the 2016 election, and Trump told President Volodymyr Zelensky that his people should work with Giuliani on an investigation into the Biden family’s business dealings in Ukraine.

“I went to meet Mr. Zelensky’s aide [Andriy Yermak] at the request of the State Department. Fifteen memos make that clear. I didn’t know Mr. Yermak. On July 19, you see it right there, 2019 at 4:48 in the afternoon I got a call from [U.S. Special Representative for Ukraine negotiations Kurt] Volker, Volker said would you meet with him, it’d be helpful to us, we really want you to do it,” Giuliani told Laura Ingraham last week on Fox News while showing personal text messages. “Four, five conversations later I met with him, that was in Madrid, I reported back to them a rather lengthy conversation. I spoke to Ambassador Sondland four times, I spoke to Volker eight times. They basically knew everything I was doing.”

Volker, who resigned from the administration last week, is set to testify before Congress on Friday. Giuliani has not yet been asked to testify, but the House has subpoenaed his personal documents.

“I’ll get all my evidence together. I’ll get my chart. I don't know if they would let me use video tapes and tape recordings that I have,” Giuliani told Sean Hannity on Fox News last night, musing about the mountain of evidence he apparently has connecting the State Department leadership to the Trump-Zelensky phone call.

The Washington Post reported yesterday that Attorney General William Barr has been meeting overseas with foreign intelligence officials in efforts to get them to cooperate with domestic investigations, including the one led by John Durham, who is looking at the origins of the FBI investigation into the Trump campaign in the 2016 election.

Durham’s investigation was covered by the National Interest at its launch and is still ongoing. The fingerprints of foreign governments are all over the FBI’s investigation, which eventually found no evidence of collusion between the Trump campaign and the Russian government. The nonexistence of collusion didn’t stop Australian diplomat Alexander Downer, Stefan Halper (connected to both U.S. and British intelligence), and Joseph Mifsud (connected to multiple western intelligence agencies) from involving themselves, and possibly playing the role of the match that lit the flame.

That Barr is personally involving himself in the investigation, instead of leaving it to Durham, shows the priority the administration is putting on “investigating the investigators.” Multiple sources report that Trump is fixated with finding out about how the investigation started.

This provides greater context for the first half of the Trump-Zelensky phone call, where Trump requests that his Ukrainian counterpart work with U.S. investigators on finding out about the origins and process with which information from the Ukrainian government aided the FBI investigation and later the Mueller probe.

“It is just another Democrat Hoax!” Trump tweeted this morning.