Trump and the Art of Dealing with Israel 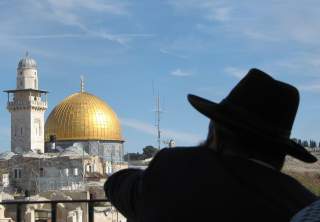 Donald Trump’s electoral victory delighted the vast majority of Israelis. Whereas they viewed Barack Obama as indifferent to their country’s vital concerns virtually from the outset of his tenure, they took Trump’s campaign rhetoric literally and viewed him as a true friend of the Jewish state. Israel’s settler movement, and its supporters on the state’s political Right were especially delighted. It was almost as if their dream had come true when Trump became the first American president who refused to commit to a two-state solution to the conflict with the Palestinians. As he stated just a few weeks into his presidency, “I’m looking at two-state and one-state, and I like the one that both parties like . . . If Israel and the Palestinians are happy, I’m happy with the one they like the best.”

Trump issued his statement as he was meeting with Benjamin Netanyahu. It certainly pleased the hard-line Israeli prime minister, whose support for a two-state solution has never been much more than lukewarm. Indeed, the atmosphere in that White House meeting could hardly have been more different from the tension-filled confrontations that Netanyahu had with Trump’s predecessor. The fact that the president “suggested” to Netanyahu to go easy on settlement construction was glossed over by the prime minister’s backers.

Instead, the settlers’ joy, in particular, only grew with Trump’s appointment and the subsequent Senate confirmation of David Friedman as America’s new ambassador to the Jewish state. Friedman was well-known in settler circles as one of their strongest supporters, having been particularly active in the development of the West Bank town of Beit El. In addition, Mr. Trump announced that he intended to move the American embassy from Tel Aviv to Jerusalem, and—unlike his predecessors who made similar campaign commitments—seemed determined to carry it through. Finally, the fact that the president had chosen his son-in-law, Jared Kushner, a long-time supporter of Israel with virtually no prior contact with Arab leaders, to oversee a new Israeli-Palestinian peace process further reinforced Israeli optimism about where that process might actually lead.

The president’s upcoming trip to Israel initially seemed to reinforce Israeli perceptions that a new era had dawned in relations between their country and the United States. But as the trip has become imminent, it has slowly been transformed into a vehicle for unfulfilled promises. The first indication that not all was going Israel’s way was the president’s White House meeting with Mahmoud Abbas ahead of other meetings with arguably more important heads of state and government. The outcome of the meeting itself was hardly music to Netanyahu’s ears: he could not have been terribly pleased when the president welcomed Abbas “as a demonstration of that [Palestinian-American] partnership, that very special partnership that we all need to make it all work.”

From Jerusalem’s perspective, matters have gone downhill since then. The president has now made it clear that he supports a two-state solution. He has yet to act upon his commitment to move the American embassy to Jerusalem. Indeed, having initially punted on the matter after King Abdullah of Jordan warned him of the negative consequences for Arab-American relations that would result from such a move, the president, according to his secretary of state, is now “being very careful” regarding the proposal, and would only proceed if it furthered the prospects for Middle East peace—which everyone knows it will not. Finally, it appears that the president may be unwilling to have Israeli prime minister Netanyahu accompany him to the Wailing Wall, on the grounds that the United States does not recognize it as sovereign Israeli territory. Given the Wall’s religious and national symbolism for the State of Israel, indeed for Jews everywhere over the past two millennia, the president’s seeming hesitancy to have Netanyahu alongside him can only be an embarrassment for the prime minister and another signal to his right-wing constituents that Trump may not be all that they hoped for.

No doubt the president is sincere in his desire to, as he put it, “do whatever is necessary to facilitate the agreement—to mediate, to arbitrate anything they’d like to do.” But it also appears that he has come to recognize that he can only function as a “mediator, arbitrator or facilitator” if he recognizes and responds to the concerns of both sides, not just those of Israel. In that sense, while the trip may not satisfy Israeli conservatives, it may mark the first step toward what is clearly this president’s effort to achieve what none of his predecessors could accomplish: to seal the ultimate “deal.”

Image: Overlooking the Wailing Wall and Dome of the Rock. Pixabay/Public domain