Trump and the Impending Foreign-Policy Crisis 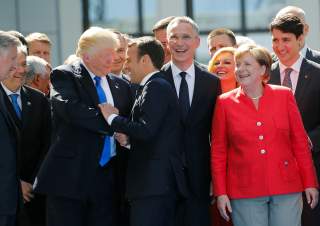 It is now six months into the Trump administration and, thankfully, the United States has not yet faced a foreign-policy crisis. In no other area does a president have more responsibility and power than in such a crisis. Any president, but particularly this one, must welcome and respect expert advice, choose quickly and wisely from a difficult set of options, consult with Congress and involve U.S. allies in the common cause. The United States must deal from a position of strength but be open to negotiations.

Unfortunately, we have seen much in Trump’s conduct as president that raises serious questions as to how he will respond when that inevitable crisis comes. Perhaps none more puzzling or concerning is his attitude toward Russia. Rebuilding cooperation with Russia where possible in areas such as antiterrorism and arms control is in the U.S. interest, but not at the expense of indifference to Russia’s actions in Ukraine and Syria or dismissing the investigations of Russian interference in recent U.S. elections.

Russia will be a key player in any crisis that erupts over Ukraine, Syria, North Korea or Iran. It must therefore be asked whether the president’s ability to lead in a crisis is being weakened by the investigations into Russian meddling and the president’s continuing refusal to accept fully that the Russians did it. This combines with other worrisome trends such as the falling international prestige of the United States, the troubling relationship with key allies such as Germany and France, the withdrawal from leadership on climate change and international trade and the seeming preference for authoritarian, nationalistic regimes rather than friendly democratic states that respect human rights.

Numerous analyses have examined whether Trump can adjust to the international situation he faces or whether the first six months of his presidency show that his basic policy instincts are set.

At this point, it is difficult to understand what the Trump foreign policy is—beyond “America First,” anti-ISIS and a form of economic nationalism that disdains international cooperation. In his first few months, he has disparaged the international order that the United States has built and led since the end of World War II. There are good reasons to criticize aspects of this order—including the meager spending on defense by some of America’s partners—but NATO and U.S. alliances in Asia are absolutely essential to U.S. security and economic well-being. And, they will be especially critical in a crisis.

If the United States does not lead in a crisis, it will ultimately lose. Perhaps not right away, but U.S. power, security and influence will suffer. Others will step in and will act in their interests, not ours.

The president’s leadership standing is weak at the moment at home and abroad. Recent polls indicate declining approval for him in the United States and worse overseas. Chancellor Angela Merkel of Germany has made clear that the Europeans can no longer rely on U.S. leadership and must consider acting without us.

Imagine a foreign-policy crisis in which the president must rally U.S. allies. Will they listen? If he has to provide U.S. intelligence to them, which is standard practice, will they believe it after he has repeatedly said he is not convinced that that Russians interfered in the 2016 elections? For that matter, will the American people believe him?

But the most disturbing aspect of his conduct is his relationship with Russia and Putin. His two-and-half-hour meeting with Putin (and Secretary Tillerson and Russian foreign minister Lavrov and two interpreters) and the subsequent revelation of a second meeting joined only by a Russian interpreter leave many serious questions.

To professional diplomats, the lack of Russian expertise on the U.S. side and the absence of a “note-taker” in the meetings is dismaying. Presumably Secretary Tillerson wrote a memorandum of the discussion he sat in on, but he was also a participant, so the notes he took cannot be complete. A memorandum of the meeting—written entirely from memory—is likely to be inaccurate in important ways.

So, what did they discuss and what understandings were reached beyond a limited ceasefire in Syria? Where there were differences, what did the Russians hear him say? Trump has said he asked Putin twice whether they had interfered in our election. But what did he say after Putin’s denials? Since we don’t know, it is possible that Putin heard whatever the president said or didn’t say as an absolution.

History is replete with examples of foreign leaders misreading what was said by U.S. officials. Clarity must be the hallmark of diplomacy. Two frequently cited examples are the North Koreans believing that a speech by Secretary of State Dean Acheson signaled that we did not regard the Korean Peninsula as within our area of concern—leading them to invade South Korea. Similarly, Saddam Hussein reportedly believed that U.S. ambassador April Glaspie’s remarks to him about the border dispute between Iraq and Kuwait implied it was not a matter of concern to the United States, leading him to invade Kuwait.

Given Trump’s tendency to shoot from the hip, is it possible that Putin took away similar impressions that he has a free hand in some key areas? Is it a coincidence the Russian backed separatists in eastern Ukraine are now declaring an independent state? We just don’t know.

All of these factors will affect the president as he deals with his first foreign-policy crisis. For the sake of the country, let us hope he recognizes the difficult situation he finds himself in and takes some concrete steps to prepare for it.

Here are our recommendations:

First, Trump should not decimate the State Department as he seems inclined to do. He is not the first president to assume office skeptical of State and the Foreign Service. But he will quickly learn, as his predecessors have, that diplomacy, particularly in a crisis, is critical. He has assembled a strong national-security team at the cabinet and National Security Council level and needs to rely on them and not undercut them with tweets. He has not filled most of the key positions at the subcabinet level at State and the Pentagon. He should move quickly to appoint persons to those positions who have deep knowledge and experience with the issues and regions.

Second, Trump must make a sustained and serious effort to reassure U.S. allies that he is genuinely committed to U.S. alliances and the principles that underlie them. He has made some efforts to repair the damage he did early in his administration. But first impressions matter—in diplomacy as in life—and our allies must wonder if his efforts are genuine.

Third, he must acknowledge that the Russians interfered in the U.S. election with the goal of trying to influence it. This does not mean admitting to collusion—that is being investigated—but the overwhelming conclusion of the intelligence community is that the Russians tried very hard to disrupt the election and undermine U.S. democracy in the process. His actions in merely asking Putin whether he did it are inadequate at best. He should have said, “We know you did it and you have to pay the price.” America simply cannot “move on” and forget it.

Fourth, he must embrace the intelligence community and stop criticizing their conclusion about Russian meddling. Every time he questions the conclusions of the intelligence community, he undermines American and allied confidence in their work, depresses the morale of countless professionals who seek to tell him the truth, emboldens the Russians and puts him on very thin ice if he has to seek the nation’s support for his decisions in a crisis.

Fifth, he should—if he has not already done so—participate in several rigorous “war games “of the most likely crises. The U.S. government is very good at developing war games to test the country’s ability to respond. These “games” help leaders understand how a crisis might develop, what resources we have (and don’t have) to respond, how our allies will react and what steps we must take to respond.

Trump has had no relevant experience to deal with a foreign-policy crisis. He must do all he can to prepare himself and his team for the crisis that will surely occur. When the phone rings at 2 a.m., what will he do? He cannot tweet his way out.

Jeffrey H. Smith, a Washington attorney, previously served as the General Counsel of the CIA and as an assistant legal adviser at the State Department. Kenneth Yalowitz is the director of the Conflict Resolution Program at Georgetown University and a Global Fellow at the Woodrow Wilson Center, and was U.S. ambassador to Belarus and Georgia.