Trump and the (Liberal) International Order 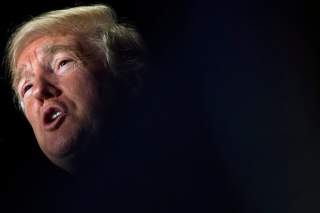 One year in, the Trump administration’s approach to foreign policy continues to baffle American allies in Europe. Much of the European discussion over the past year has focused on the American retreat from its traditional role as guarantor of the liberal international order. Where can we expect continuity from Trump? And how much will this unconventional president disrupt before he leaves office? In calculating their answers to these questions, several prominent European politicians, including Angela Merkel and Emmanuel Macron, have suggested that the Europe should fill the void left by Trump’s “America First” agenda by redoubling its efforts to defend the liberal international order.

The liberal international order describes a body of rules, norms and institutions that govern international affairs. It encompasses security, economics and values. For decades, American administrations have waxed lyrical about defending this order—as in President Obama’s 2015 National Security Strategy—while frequently struggling to do so in practice. President Trump’s new version does not endorse the post–1945 American-led order. It depicts international affairs as a zero-sum game, and senior administration figures reject a Kantian “global community” in favor of a Hobbesian state of nature in which “nations compete for advantage.” Their language differs starkly from that of the Obama administration and from the EU’s vision of a “rules-based global order with multilateralism as its key principle.”

Trump’s preference for competition over cooperation does not mean that his administration will jettison entirely America’s established global-security role. Since coming to office, the Trump administration can hardly be accused of pursuing an isolationist or accommodating foreign policy. To the contrary, the new National Security Strategy (NSS) and the National Defense Strategy (NDS) call for the assertive application of U.S. military, political and economic power. Both documents presume growing strategic competition from China and Russia. The NDS states that these two countries are “undermining the international order from within the system by exploiting its benefits while simultaneously undercutting its principles and ‘rules of the road.’”

Even under the mantra of “America First,” the Trump administration seems willing to maintain what it calls the “free and open international order.” This entails a rejection of spheres of influence, the protection of an open global commons and the preservation of stability. The U.S. Navy still carries out freedom-of-navigation exercises in the South China Sea. Washington maintains its nonrecognition policy of Russia’s illegal annexation of Crimea and has recently decided to provide Ukraine with lethal military assistance, although undisciplined provocations of the North Korean leader, the weakening of the Iran Deal and the unilateral move to recognize Jerusalem imply an impatience with the status quo. This impatience may intensify over time.

The NSS acknowledges that allies and partners matter to “U.S. interests and help push back against U.S. strategic competitors.” The NDS declares that “the United States will always defend our interests and uphold our commitments to allies and partners.” Along the same lines, the NSS makes a case for active US engagement in Europe, noting that “a strong and free Europe is of vital importance to the United States.” It offers unequivocal support for NATO and for the alliance’s Article 5: this issue had plagued the transatlantic relationship ever since Trump’s campaign and his vacillation as president about publicly affirming Article 5. While allies were put off by Trump’s repeated criticism of NATO and his tough language on burden sharing, actual U.S. support for NATO remains unchanged. There was a $1.4 billion increase in defense spending in Europe in 2018, a new American-led battalion stationed in Poland and active American participation in major military exercises in Europe.

The NSS contends that the traditional global-economic system no longer serves American interests, paving the way for more unilateral and protectionist policies. Having already withdrawn from the Trans-Pacific Partnership, halted negotiations with the EU on a Transatlantic Trade and Investment Partnership and refused to nominate judges to the WTO’s appellate body, the Trump administration is abandoning the efforts that previous U.S. administrations made to shape the global economic system. Nor does the Trump administration seem to distinguish between allies, like Germany, and competitors, like China, when it comes to messaging on trade. Aimed at a domestic audience, Trump’s rhetoric on trade does have a clear foreign-policy logic.

The Trump administration’s plan to impose new economic penalties on China, including a recent unilateral tariff on solar panels, has been carried out with little or no consultation with European and Asian partners. Rather than forging a common front to press Beijing to open its markets and to respect intellectual property, the United States seems more interested in unilateral counter-moves against perceived trade cheaters like China. Washington’s traditional role in upholding the multilateral economic system is clearly wavering. The general diminishment in American diplomacy, reflected in budget cuts and unfilled positions at the State Department, confirms the image of a White House drawn to unilateral action.

Secretary Rex Tillerson has argued that advocating human rights “creates obstacles” to U.S. security and economic interests. President Trump has repeatedly expressed his admiration for autocratic strongmen. He has praised Xi Jinping’s “extraordinary elevation” by the Chinese Communist Party, congratulated Erdogan on winning a controversial referendum and praised Duterte’s thuggish manner of combating the drug trade. He has repeatedly expressed his praise and admiration for Vladimir Putin. Washington’s failure to pressure governments in Central and Eastern Europe risks emboldening these regimes in their movement away from liberal democracy.

On his foreign trips, Trump does not speak out about democracy and human-rights violations, as had often been the case with previous American presidents, while Trump’s acrimonious language about the press and judicial system within the United States has been seized on by foreign leaders eager to curtail freedom of the press and to liberate themselves from the separation of powers in their own countries. This development is without precedent in the history of American foreign policy.

Erik Brattberg is the director of the Europe Program at the Carnegie Endowment for International Peace in Washington, DC.

Michael Kimmage is a professor of history at the Catholic University of America and a fellow at the German Marshall Fund.