Trump and the Middle East: Expect Continuity, Not Change 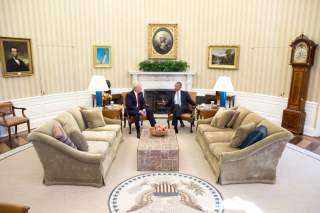 For those concerned with a possible recalibration of U.S. Middle East policy after President-elect Donald J. Trump is sworn into office, they need not worry. Change is not in the air, it is continuity.

Although it is true that much of Trump’s thinking about international affairs remains unknown, it is highly unlikely that Trump’s administration will differ much from that of Obama’s.

Take, for example, the stalled Israeli-Palestinian peace process. Trump has had fairly little to say about Israel during his campaign. However, he did say that he would move America’s embassy from Tel Aviv to Jerusalem, despite the fact that East Jerusalem is claimed by the Palestinians and is considered occupied by the majority of the international community. But we’ve heard presidents on the campaign trail make the same pledge. George W. Bush said he would do so, but never got around to doing it. There is no reason to believe that Trump will be any different.

Referring to the stalled peace process, Trump remarked, “That's probably the toughest deal in the world right now to make and it's possible it's not makeable.” Bearing this in mind, preliminary Israeli assessments expect Trump to be hands off. However, for the most part so was Obama. Compared to the efforts of his predecessors Bill Clinton and George W. Bush, Obama devoted little attention to resolving the decades old conflict. Instead he let Secretary of State Kerry and Vice President Biden do most of the heavy lifting.

Although Obama called for Israeli settlements to “stop,” his administration rarely took a stand in international fora. The same will be the case for Trump. Meanwhile, Obama's package of $38 billion of military aid to Israel will be implemented by Trump, and Israel will receive the long-delayed F-35 joint strike fighter. Like the Obama Administration, the Trump Administration will not supply Israel with bunker busting bombs with the capability to strike Iranian nuclear sites. In other words, little will change.

The same is true on Iran. Despite Trump decrying the Joint Comprehensive Plan of Action as the worst deal in history, Trump will find his hands tied. Not only will he be told by his advisors that to “tear up” the agreement would set a dangerous international precedent whereby a government may not be bound to agreements signed by previous administrations, Trump will realize that if he were to renege on the agreement, he would only strengthen Iran’s conservatives, upset his European allies, and indeed, hamper his administration’s outreach to Russia.

Even Trump's attempt to warm relations with Russia is not new. Let us not forget it was Obama's policy to reset relations in the first place. He sent Hillary Clinton to Geneva to present Russian Foreign Minister Sergei Lavrov with a cheesy looking red button with the word “reset” (misspelled in Russian). Later, Obama was angry about Russia’s invasion of Ukraine, but did little to resist it. And since the rise of Islamic State, the Obama Administration toned down its anti-Assad rhetoric, grumbled and complained about Russian airstrikes and boots on the ground, but accepted them. Trump will recognize what was already tacitly understood by Obama; in their opposition against the Islamic State, the United States and Russia share more in common.

The same can be said about America’s relations with Turkey. Despite its gradual descent into authoritarianism, the Obama Administration has only offered careful voices of concern or condemnation. Recognizing Turkey as a regional asset, Trump will no doubt do the same. Turkey’s interventions in Syria and Iraq, especially against militias associated with Syria’s Kurds, have been reluctantly tolerated by the Obama Administration. Trump, like Obama before him, will feel obliged to keep NATO member Turkey onside, while supporting the Kurdish forces of the People’s Protection Units (PYG) in their fight against Islamic State.

Beyond the rhetoric, Trump and Obama share a similar dislike for so-called free-riders. Obama expressed his distaste for U.S. allies — European, Asian and the Gulf States alike — for not picking up their share of the slack and relying on the United States for their international security. Trump’s complaints about NATO members echoed those of Obama’s, as did his comments about Saudi Arabia needing to pay for U.S. protection.

Although on a rhetorical level, there will be pronounced differences between the administrations of Trump and Obama, on the substantive issues we should expect more of the same.

Simon A. Waldman, Visiting Research Fellow at King’s College London, is the author (with Emre Caliskan) of The “New Turkey” and Its Discontents. Follow him on Twitter @simonwaldman1.