Trump 'Towers' over the GOP: Why Donald Dominates 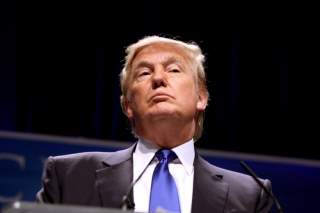 When the former Democratic presidential candidate William Jennings Bryan passed away in 1925, H.L. Mencken seemed to find his muse as never before. The acidic Baltimore writer unleashed a withering anti-obituary on the populist Bryan, calling him, among other things, “a zany without sense or dignity” who “seemed only a poor clod like those around him” and was “full of an almost pathological hatred of all learning, all human dignity.” Bryan, Mencken concluded, “was passing out a poor mountebank.”

Today another self-anointed champion of the people is playing the role of easel for pundits’ most inspired vitriol. Writers (including this one) have called Donald Trump a “ridiculous buffoon with the worst taste since Caligula” and “the poster child for the hazards of going to bed with clown makeup still applied” whose book “is full of sub-Iacocca gibberish” and with whom arguing is like “dressing up an adorable toddler in a Viking outfit and listening to it say that he will raid my village and slaughter all in his path.”

And those are just the conservatives. Republicans are understandably more aghast at Trump Mania than Democrats, given that it’s their presidential contest that’s at stake. But their sneering hasn’t stopped Trump from becoming a genuine political phenomenon.

Why is this? Why, presented with the strongest and most variegated presidential pack in decades, are conservatives opting for a former Clinton donor who uses eminent domain to bully widows?

The first was diagnosed by National Review’s Kevin Williamson in one of his many castigations of Trump. The tea party, as Williamson points out, wasn’t first and foremost an uprising against Democrats, but against the Republican establishment. Jaded after eight years of fruitless spending and war, conservative activists joined with previously uninvolved independents to scrub the Bush II stains out of the carpet. That meant shifting the focus to fiscally conservative issues, which the establishment, flush with earmarks and leery of seeming heartless, had long downplayed in favor of defense hawkishness.

Tension between the party and the tea party quickly escalated. The latter came to suspect that the former was using them for votes and abhorred their attempts to undo victories like the sequester and Export-Import Bank expiration. The perception set in that the Republican gentry lacked moxie and needed to be replaced from the outside.

Donald Trump doesn’t seem like a natural fit for the position of political sans culotte. But conservative hatred of GOP squishes has reached such a pitch that they’re willing to cheer anyone who trashes the likes of John McCain and Lindsey Graham, no matter how caustic the terms. Many of Trump’s defenders don’t expect him to win the nomination. They view him instead as a blimp packed with explosives flying malevolently towards the core of the Republican Party. And they can’t wait to watch the pyrotechnics.

There is, however, a less anarchic force behind Trump: immigration, the second reason for his ascent. There’s long been a tension at the heart of the tea party between libertarianism and populism. Its early activism against Obamacare and spending biased it towards the former. Republican lawmakers were forced off familiar issues like immigration and into the uncharted waters of supercommittees and sequestration. Revoking the direct election of senators, a rebuke of populism, became a pet issue on the right.

Most tea partiers of 2009 and 2010 wanted to secure the border, too. But immigration wasn’t their primary catalyst. That began to change as Republicans touted immigration reform as a panacea for its electoral woes and President Obama signed an executive order easing restrictions on up to 5 million illegal immigrants. Conservatives brutally returned fire last year when Dave Brat ousted then House majority leader Eric Cantor in the Republican primary by running to the right on the immigration issue.

Today, gimmicky Republican budgets glide through the House of Representatives with scant outside protest, while illegal immigration runs hotter on talk radio than at any time since 2006. Yet there are actually very few immigration hawks among the GOP’s presidential prizefighters. Scott Walker claims to be one and even says he wants to curtail legal immigration, but he’s also supported a fairly generous path to citizenship. Trump is impure here, too—he attacked Mitt Romney for being “mean-spirited” towards Latinos in 2012—but he’s compensated with sulfurous rhetoric about illegal immigrants being “rapists” and “killers.” For conservatives in an increasingly populist mood, this is exactly what they want to hear.

They’ve come to regard Trump as an unvarnished truth teller in a sea of political babble. That’s the third reason for his success. Ask most voters and they’ll tell you they’re tired of politicians who use talking points. But for conservatives, the guile of political correctness has become a source of fury. They scorn euphemisms like “undocumented workers” and are baffled that “all lives matter” is suddenly a controversial statement. They’ve developed a craving for authenticity, which at various times has been slaked by Chris Christie, Glenn Beck and Ted Cruz.

To some listeners, Donald Trump sounds like a patient with a virulent case of logorrhea. But to conservatives, there’s a lot of truth buried in those rhetorical brick piles. Trump, of course, carefully steers his verbal gush so as to tell the right exactly what it wants to hear. He’s the snake oil salesman of straight talk. When he says something like “Frankly illegal immigrants get treated better than many of our vets. It’s a disgrace what’s happening in this country. And John McCain has done nothing about it but talk,” he knows he’s pushing several conservative buttons—immigration, the VA, McCain—while still maintaining a valid point.

So stuffy writers like me can hurl creative epithets at Trump. But we should also recognize the greater trends behind his support. William Jennings Bryan was dismissed by the elites of his day, and while more immediate history will likely repeat itself in the case of Trump—remember, he was leading GOP presidential polls in 2011, too—a rich electoral vein has clearly been tapped here.

The reality is that vast swaths of the country don’t cotton to Washington’s obsession with immigration reform and don’t much care if their champion breaks a few rules of etiquette. As the Republican primary revs up, which candidate will represent them?