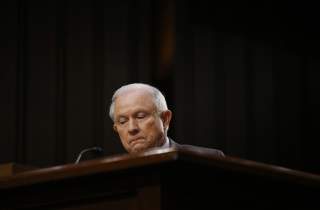 Donald Trump has a secret weapon. Even as controversies swirl around him like galaxies colliding, one scandal or outrage smashing into the next before the last one has fully sunk into citizens’ brains, Trump remains on his feet, defiant. He knows something his foes don’t know—or can’t admit. He knows that as low as he might go in the polls, his enemies are truly, comprehensively, utterly bankrupt in the public’s eyes. The American people may not like Trump, but they loathe the forces of respectability arrayed against him. The media? Congressional Democrats? The Republican establishment? With enemies like those, Trump hardly needs friends.

Which is a good thing, because the president does not seem too concerned about keeping the few political friends he has. His anger at Attorney General Jeff Sessions has been simmering for months, and Trump held nothing back in telling the New York Times exactly how he felt this week. He told the paper’s Peter Baker, Michael S. Schmidt and Maggie Haberman that he would never have put Sessions in charge of the Justice Department had he suspected that Sessions would recuse himself from the investigation into Russia’s involvement in last year’s election. Trump even said that Sessions had been less than forthright in explaining his own dealings with Russians. “Jeff Sessions gave some bad answers” during his Senate confirmation hearings, Trump told the Times. “He gave some answers that were simple questions and should have been simple answers, but they weren’t.” The words are a tangle; their meaning is clear.

Picking on Sessions, the first—and, for a long time, the only—Republican senator who had endorsed Trump’s presidential campaign, was an unexpected move for a president who had just seen his own party’s Senate fail to pass a major health-care reform he had called for. It was a surprising move, too, for a president who continues to face daily innuendo about his relationship with Moscow. Trump, it turns out, had a private powwow with Vladimir Putin at the recent G-20 meeting. And this week it came out that yet more dubious Russian figures were present at his son's meeting last year with a Moscow-connected lawyer who promised to share with the Trump campaign embarrassing information about Hillary Clinton. Sessions may have caused the president a headache by recusing himself from the Russia investigation. But Sessions is more than just a Trump loyalist, and one who happens to be the chief law enforcement official in the country. Sessions is also Trump’s link to the hard-line Republican Right that was Trumpian before Trump himself was. Sessions arguably outranks Trump himself in the hearts of Republicans who yearn to crackdown on immigration and demand tough “law and order” policies. Steve King, the Iowa Republican who is another hero to immigration restrictionists, swiftly took to Twitter to defend Sessions. Trump risks losing a critical part—the braced and dedicated ideological cadres—if he makes Sessions the scapegoat for his Russia frustrations.

Libertarian-leaning Republicans would celebrate Sessions’s downfall—they were provoked this week by the Justice Department’s new rules expanding civil-asset forfeiture—but it’s hard to imagine libertarians taking the place of immigration restrictionists in Trump’s vanguard. Trump has performed political miracles, so perhaps he could demolish and remake his own movement. But it’s hard to say just how much that movement really is his own: Trump swept through the Republican Party like a hurricane last year because he united a long dissatisfied nationalist Right with the public’s (and especially the grassroots GOP’s) mounting hatred of weak and scripted establishment politicians. No one else is yet in a position to duplicate what Trump did, but the forces he harnessed are there to be yoked by others when the time is right. In any event, while the hard Right has no obvious alternative to Trump, Trump has no obvious alternative to Sessions: no more prospect of a loyal attorney general, and letting the Justice Department’s bureaucracy operate with only an acting attorney general in charge would be a prescription for even more trouble for the president. The name Sally Yates should still be seared in Trump’s memory.

Trump’s approval rating among Republicans has, so far, held up amid all the turmoil. Brendan Nyhan, a political scientist at Dartmouth College, has noted that the numbers may not be as healthy as they seem at a glance, however: if the Republican Party is shrinking, as polls suggest, and anti-Trump Republicans are the ones most likely to leave the party (as seems obvious), then Trump’s apparently solid GOP support may actually be masking an erosion in the president’s standing. Complicating Nyhan’s point, but not nullifying it altogether, is the fact that Trump’s approval ratings in the counties he won last November remain positive. Trump is not politically destitute as a result of the relentless controversy in which he's embroiled. Even Trump, however, cannot afford to take his base for granted. There comes a point where doubts about Trump and revulsion toward the political establishment balance out—and a point beyond that where the balance tips against Trump.

The president remains lucky in one thing, though: dissatisfied middle Americans have no other options; the Democrats have resisted anything resembling a populist turn, while the Republican alternative to Trump, such as it is, looks like little more than Bush nostalgia—typically marketed in Reaganite drag. What would it take for “compassionate conservatism” and the “freedom agenda” to make a comeback? It would take a time machine, one that could stop George W. Bush from invading Iraq, the dream come true for neoconservatives that gave them the nightmares they’ve had to live with ever since. The likes of David Frum and Michael Gerson had their turn in power: it gave us endless wars, the Great Recession, Barack Obama and now Donald Trump. When that’s the alternative, who is shocked that Republicans stick with Trump?

The great fantasy of Trump’s critics is that once he’s gone, the old dynasties will return to their natural place in power. This has all been a horrible aberration, they believe, a last-gasp racist spasm by dying Red State yokels seduced by Vladimir Putin. Once the opioids have kicked in and put these Wisconsinites and Pennsylvanians and Michiganders to sleep for all time, global integration can resume; history will be back on track. America will once again face a safe choice between Obamacare and Romneycare, while wise men and women reenact the Cold War until the end of time.