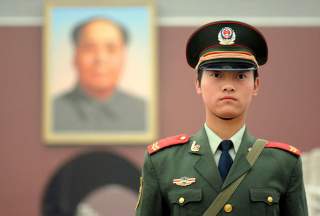 Beijing’s diplomats have been remarkably quiet after the election of Donald Trump, even though the president-elect has signaled his administration will pursue policies fundamentally disadvantageous to China.

Chinese leaders, some think, are merely laying in wait, but there are signs they have themselves been ambushed and still do not know how to react to Trump. Perhaps Erin Burnett put it best. “No one has ever talked to China like this before,” she said on her CNN show last month, in the wake of the president-elect taking a congratulatory phone call from Taiwan President Tsai Ing-wen. “China doesn’t have a strategy to deal with this.”

Chinese leaders once had an extremely successful strategy. They let American presidential candidates rail against “China” and then challenge them early in their first months in office, throwing them off balance and setting the tone for the rest of their terms.

George W. Bush, for instance, faced a crisis on April 1 of his first year in the White House when a Chinese jet clipped the wing of a U.S. Navy EP-3 reconnaissance plane in international airspace over the South China Sea. Beijing then imprisoned 24 aviators for 11 days, successfully exacted what amounted to a public apology and a ransom, and completed the humiliation by stripping the Navy plane of its sensitive electronic gear and requiring it to be chopped into pieces.

Beijing tested his successor by harassing two unarmed Navy reconnaissance vessels, the Impeccable and the Victorious, in the South China and Yellow Seas in a series of dangerous incidents beginning March 2009. One of those incidents was so serious—the attempted severing of the towed sonar array from the Impeccable—that it constituted an attack on a U.S. vessel, in other words, an attack on the U.S. itself.

Bush and Obama, pursuing misguided approaches, tried to minimize China’s conduct. Both presidents avoided further confrontations with Beijing and throughout their terms looked and acted as if intimidated. During their administrations, Beijing continually undermined peace and stability in the region—and did so largely without America imposing costs for clearly unacceptable behavior.

Enter a new type of leader, Donald J. Trump. The willful president-elect did not wait for China to challenge him. On December 2, he took what is now known as “The Call” from Tsai.

Trump turned the tables on Beijing, striking the Chinese even before the swearing-in. His conversation with Taiwan’s president was not some happenstance event, as he later tried to characterize it, but the result of weeks of staff work on both sides.

As both critics and admirers noted, the call undermined more than four decades of settled policy, and Trump made it clear he knew the significance of what he did. “I fully understand the One-China policy,” he told Chris Wallace in an interview aired on Fox News Sunday on December 11, “but I don’t know why we have to be bound by a One-China policy.”

The most remarkable aspect of this extraordinary series of events is China’s reaction or, more precisely, its two apparently uncoordinated reactions. First, the Chinese air force on December 10 flew planes completely around Taiwan. That was the second time in two weeks China’s aircraft had done so, the first time an apparent warning to Tsai to not make the call to Trump. Then last month the Liaoning, China’s only aircraft carrier, and five escorts took a detour on the passage from Qingdao to Hainan to brush by the east coast of Taiwan.

Moreover, many interpret China’s seizure of a U.S. Navy drone last month in international waters in the South China Sea as another response to the Tsai call. Trump tweeted about the incident as well, suggesting the Chinese could keep it. His startling suggestion is almost certainly an attempt to divest the Chinese of leverage acquired by grabbing the underwater craft.

The provocative actions of the Chinese military, which has been implementing its own foreign policy in recent years, is balanced out by the curiously restrained response from China’s civilian leaders. Trump has repeatedly slammed them in subsequent tweets, but as the South China Morning Post pointed out Wednesday, “Beijing has refrained from directly criticizing him as an individual, despite his outspoken comments about China.”

China’s leaders, as numerous Chinese commentators have pointed out, is unhappy about the unprecedented barrage directed at them, so why such restraint? For one thing, the leadership, in the words of Liu Weidong of the Chinese Academy of Social Sciences, “has yet to adapt to Trump’s unorthodox style in dealing with diplomacy.”

Said Liu to the South China Morning Post, “Trump may think he is just making casual comments, but Beijing takes it very seriously, since this disrupts Beijing’s calculations.”

Trump is not acting like any of his predecessors, and while that is often held to be a criticism, it has had one important beneficial effect: unnerving overly confident Chinese officials who have become too accustomed to dealing with American presidents behind closed doors.

Those officials find Trump’s effective use of Twitter utterly confounding. After all, China’s scripted leaders are picked by their fellow Communist Party cadres, and all of them stay in power by coercion rather than persuasion.

Take Trump’s soon-to-be counterpart, Xi Jinping. Xi has only one social media posting to his credit in his entire career, and that was posted to the account of a Party media outlet, the authoritative PLA Daily. Tellingly, Xi has no account of his own on Weibo, China’s Twitter-like service. China’s supremo, apart from on-high pronouncements, is not big on direct communication either.

Even though Trump cannot stop communicating his intentions, Xi & Co. remains unprepared for him. For instance, Beijing, as the Financial Times reported, was “shocked” by the appointment of Peter Navarro as head the newly formed National Trade Council.

Chinese leaders had hoped, and almost certainly expected, Trump would follow his predecessors and “tone down his anti-Beijing rhetoric after assuming office.” With Navarro, Commerce Secretary pick Wilbur Ross, and U.S. Trade Representative-designate Robert Lighthizer—trade hawks all—Trump has made it clear he is going to take on Beijing as the first order of business. Chinese leaders should have seen this coming.

There is one other explanation for Beijing lying so low. At the moment, Chinese technocrats are engaged in an all-out war against speculators shorting the renminbi, the Chinese currency.

The People’s Bank of China, the central bank, looks like it has been spending tens of billions of dollars in the past several days supporting the “redback,” which fell 6.95% last year against the dollar in the onshore market. Perhaps Beijing is letting Trump alone because they do not want him tweeting about their desperate effort to stabilize the situation. He has, as just about everyone knows, complained about their rigging of the Chinese currency.

China is now rigging its currency upwards, not down as Trump has alleged, but in Beijing they undoubtedly do not want to take a chance and get involved in a Twitter war with him over any subject, a conflict they know they cannot possibly win.

The Chinese, it seems, have just met someone impossible for them to intimidate.

Gordon G. Chang is the author of The Coming Collapse of China. You can follow him on Twitter: @GordonGChang.