Is the Trump Ukraine Controversy Much Ado About Nothing? 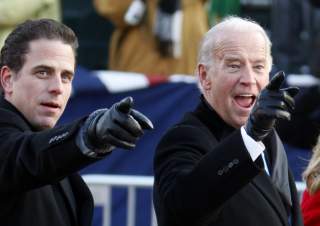 A whistleblower complaint has riled the intelligence community this week and is roiling the Trump White House. Tonight, the Wall Street Journal reported that President Donald Trump urged Ukrainian president Volodymyr Zelensky no less than eight times during a July phone call to investigate Hunter Biden, a lawyer and the son of Democratic presidential candidate Joe Biden. But Trump did not apparently allude to foreign aid during the conversation. So does the brouhaha around Ukraine really represent a mortal threat to Trump? Or is it similar to the uproar around the Mueller investigation—much ado about nothing?

To listen to Trump’s critics, it represents the former. They point to the whistleblower in the intelligence services who originally helped to create this fresh controversy. Last month, a whistleblower complaint was brought to the attention of Michael Atkinson, Inspector General of the Intelligence Community. Atkinson believed the complaint represented “immediate concern,” and testified behind closed doors in front of the House Intelligence Community yesterday. Atkinson was prevented from revealing any details however due to the intervention of acting Director of National Intelligence Joseph Maguire.

According to the Intelligence Community Whistleblower Protection Act of 1998, a whistleblower brings a complaint to the inspector general who then gives it to the DNI Chair (a position created in 2004). The intelligence chief makes a decision on whether or not to send it to the appropriate congressional committees. Maguire made the decision that the complaint was neither of immediate concern nor under DNI’s purview.

Congressional Democrats, specifically House Intelligence Committee Chairman Adam Schiff (D-CA) are alleging that DNI is taking orders directly from the White House to cover up wrongdoing. Maguire is set to testify publicly in front of Congress next week.

“It’s very difficult to disentangle a disagreement over policy from a legitimate whistleblowing about unethical, or illegal, or otherwise improper activity relating to the intelligence community. And not knowing the particulars of this accusation, it’s very hard to render a judgment on whether this was an appropriate use of the whistleblowing channel or not,” said George Beebe, vice president and director of studies at the Center for the National Interest. Beebe previously served as director of Russia analysis at the Central Intelligence Agency.

This fog of secrecy did not stop the Washington Post or the New York Times from reporting on Wednesday and Thursday respectively that the complaint had something to do with a conversation between Zelensky in July. Their anonymous sourcing alleges that Trump pressured Zelensky to investigate allegations of corruption stemming from Joe Biden and his son Hunter’s dealings in Ukraine.

“You need to know that the New York Times and the Washington Post seem to be solidly behind Joe Biden as the establishment candidate. So, I see this as a sort of preemptive move just in case it turns out that Biden and his son are guilty of corruption. Now let’s be clear: if they are innocent, they should have nothing to fear about this,” explained Ray McGovern, a former CIA official of twenty-seven years who has previously chaired the National Intelligence Estimates and prepared the President’s Daily Brief. “The New York Times and the Washington Post have a record of blowing up stories to discredit him [Trump] or to prevent more damage to the Democrats and that’s what I see here.”

Regarding the inspector general contradicting the DNI Chair, McGovern commented that it was the first instance of it he’d seen in his career. “Usually the IG will defer to the acting head of the CIA or head of the DNI apparatus. This time this fellow went forward. Now the essence of the complaint is really kind of strange. To be a legitimate intelligence complaint it has to involve an intelligence matter. And if it’s Trump talking to Zelensky, what intelligence matter would they be talking about? Unless it’s that, the Inspector General himself overreached and that can be brought back by lawyers in the Department of Justice,” he told the National Interest.

The Biden family’s connections to Ukraine that were allegedly discussed go back to the ouster of incumbent President Viktor Yanukovych in 2014. In a leaked phone call weeks prior to the coup, then-Assistant Secretary of State Victoria Nuland discussed with then-U.S. ambassador to Ukraine Geoffrey Pyatt toppling the government. They also discussed who might lead it. “We want to get somebody with an international personality to come out here and help to midwife this thing,” said Pyatt. Nuland responded, Biden is “willing.”

“It was in February when Yanukovych was overthrown, and just a few months later (in May), Joe Biden’s son and a close friend of John Kerry’s stepson, they both join the board of this Ukrainian gas company. And the name of that was Burisma Holdings,” said Joe Lauria, editor of Consortium News and a former correspondent for the Wall Street Journal. “So just after an American-backed coup, you have Joe Biden’s son Hunter Biden and this John Kerry family friend joining the board of probably the largest private gas producer in Ukraine.”

“[T]hey installed the new government, and as the bounty of this coup, Joe Biden’s son personally profited. He would not have gotten that job if Yanukovych was still in power,” Lauria told the National Interest.

Nor is this all. “I think it was totally inappropriate for the son of the vice president of the United States to be sitting on the board of a Ukrainian company while we had a close relationship with that government of Ukraine. Absolutely that was inappropriate,” says Professor Keith Darden of American University. “Apparently technically it doesn’t violate U.S. law, but it certainly impeded the work that we were trying to do in Ukraine: anti-nepotism, anti-corruption. It looked like the United States was engaging in some very Ukrainian corrupt practices.”

Darden believes that if Trump promised Zelensky financial aid in exchange for the Ukrainian government investigating Hunter Biden, this would be an abuse of power. If he merely pressured him without and explicit quid pro quo, then it would be inappropriate but not necessarily illegal.

Rudy Giuliani met with Ukrainian officials multiple times over the summer. “I found out this incredible story about Joe Biden, that he bribed the President of the Ukraine in order to fire a prosecutor who was investigating his son. That is an astounding scandal of major proportions,” Giuliani told CNN’s Chris Cuomo last night.

Giuliani is referring to Viktor Shokin, former general prosecutor of Ukraine who was dismissed in March 2016. A former Obama State Department official speaking to the National Interest said, “I can say with great confidence that the desire to fire Shokin was a kind of multiagency, multiperson desire, in no sense was that driven by the vice president . . . that assumption is false.” The former official did confirm, however, that Joe Biden was “very involved” in Yanukovych’s fall from power but could not speak to the circumstances surrounding Hunter Biden’s appointment in April to the board of Burisma Holdings.