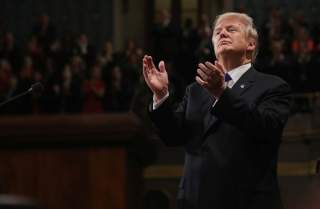 Every spring, at the beginning of my History of the Cold War course at Harvard Extension, I provide an overview of Marxist thought—especially the precept that it is the system of economic relationships that drive all other aspects of society, including its politics and culture.

Listening to President Donald Trump’s State of the Union address, I heard a number of geoeconomic imperatives that, if fulfilled and implemented, will have a profound impact on the direction and focus of U.S. national-security policy.

Bob Merry, the former editor of the National Interest, characterized Trump's speech as a “novel mix of plans, attitudes, and impulses.” In heeding Merry's counsel that the State of the Union represents “disparate attitudes and measures” which may or may not translate into a coherent set of policies, let us assume, for the sake of argument, that the Trump administration, during its time in office, makes substantial progress on most of the items Trump outlined in the U.S. Capitol.

Here were the key geoeconomic themes found in the president’s address:

- The return of manufacturing to the United States with the repatriation by U.S. firms of their capital and plants from abroad back to the homeland;

- Encouraging non-U.S. companies to invest in producing their goods and services for the U.S. market on U.S. soil;

- The continued development of the domestic U.S. energy industry (and by extension of other key commodities) so that the United States becomes not only self-sufficient but transforms itself from an importer to an exporter

- The revitalization of the country’s infrastructure, not only to improve American connectivity with the rest of the world but to tie closer together the different regions of the United States

Linked to it, and embedded in the speech, also were present Trump’s consistent skepticism about the value of the current U.S. mode of global engagement. While he was speaking primarily about free-trade pacts, the charge that the U.S. role in developing, supporting and maintaining a network of multilateral arrangements that underpin the liberal world order is draining the wealth of the country reflects, as I have pointed out, “a view that the United States does not, in his opinion, receive an adequate return on its investment to justify the costs.”

And his call for Congress to consider legislation that would more closely tie the disbursement of U.S. assistance to the willingness of its recipients to support American initiatives again reflects his more transactional view of foreign policy—as a series of quid pro quos.

With this foundation, therefore, the reemergence of the United States as a more self-sufficient economic power, supplying its own energy and raw material needs and in turn producing most of its goods and services, would remove much of the economic rationale for the current strategy of U.S. forward engagement. Keeping the global supplyways open and the lines of communication unobstructed would matter less for a country that focuses more on tying together its continental market than on linking its different regions to overseas partners. An energy self-sufficient America that is also a net exporter no longer has a geoeconomic reason to continue to insist that the Persian Gulf, for instance, is a region whose security is vital to the United States. Keeping supply lines open off the Horn of Africa or through the Straits of Malacca become less critical to a country who does not import raw materials or finished goods that have to pass through these waterways.

There is still the web of U.S. alliances and security commitments, but a more transactional approach could begin to erode the strength of those promises and thus the rationale for continued intensive U.S. engagement. Taking the president at his word, another country which is less supportive of the U.S. trade or security agenda as defined by the administration could not expect an open-ended guarantee from the United States—and a number of close U.S. allies around the world are prepared to diverge from Washington on a number of issues. Nor does the president share the ideological commitment of his predecessors to expand the zone of free-market democracies around the world. American involvement in the world would therefore shift to a much more Jacksonian basis—where the United States is less inclined to want to shape the global and regional security environments and focuses its attention only when a particular situation poses a threat to the homeland.

In the past, part of the way that the bipartisan consensus on U.S. foreign policy was sold to the general American public was that our own security and prosperity would be negatively affected by an American withdrawal from the world. But the Trump economic vision, as outlined in the State of the Union, would change the equation. America may not retreat into full isolationism—but if this program is enacted, then we should expect the foreign-policy debates of the future to focus not on whether the United States disengages from the rest of the world, but on the terms and limits of that disengagement.

Image: U.S. President Donald Trump applauds during his first State of the Union address to a joint session of Congress inside the House Chamber on Capitol Hill in Washington, U.S., January 30, 2018. REUTERS/Win McNamee/Pool ​