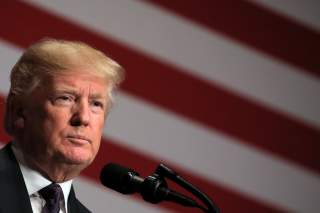 In what is perhaps a recognition that the international system is actually a “liberal hegemony” as John Ikenberry wrote, the document couches itself in the language of the realist school of international relations. Nonetheless, the central theme of the document is to preserve the rules-based international order that the United States has built since the end of the Second World War. Indeed, the Trump administration frames the struggle as a “political contest” between repressive systems and free societies.

“China and Russia began to reassert their influence regionally and globally,” NSS states. “Today, they are fielding military capabilities designed to deny America access in times of crisis and to contest our ability to operate freely in critical commercial zones during peacetime. In short, they are contesting our geopolitical advantages and trying to change the international order in their favor.”

The Trump NSS posits that Russia and China want to “shape a world antithetical to U.S. values and interests.” To that end, the NSS suggests that China is seeking to displace the United States and “expand the reaches of its state-driven economic model, and reorder the region in its favor” in the Indo-Pacific region. Meanwhile, NSS also states that Russia aims to “restore its great power status and establish spheres of influence near its borders” in the post-Soviet space. Nonetheless, despite all but naming Beijing and Moscow as enemies, the White House believes that there are opportunities for cooperation with both states. “The intentions of both nations are not necessarily fixed,” the NSS states. “The United States stands ready to cooperate across areas of mutual interest with both countries.”

To retain America’s advantage over its rivals, the Trump administration believes that it should maintain an overmatch against competing powers. “The United States must retain overmatch—the combination of capabilities in sufficient scale to prevent enemy success and to ensure that America’s sons and daughters will never be in a fair fight,” the NSS states. “Overmatch strengthens our diplomacy and permits us to shape the international environment to protect our interests.”

The Trump administration does seem to understand that potential rivals such as Russia and China will not directly challenge American strengths, but will instead exploit Washington’s weak points. Thus, the Trump administration is examining ways to counter what it sees as gray-zone challenges below the threshold of war—which countries like Russia and China can exploit.

“­The United States must prepare for this type of competition,” the NSS states. “China, Russia, and other state and non-state actors recognize that the United States often views the world in binary terms, with states being either ‘at peace’ or ‘at war,’ when it is actually an arena of continuous competition. Our adversaries will not fight us on our terms. We will raise our competitive game to meet that challenge, to protect American interests, and to advance our values.”

The Trump administration cites Russia as one particular example of such gray-zone confrontations. “­Through modernized forms of subversive tactics, Russia interferes in the domestic political affairs of countries around the world,” the NSS states. “The combination of Russian ambition and growing military capabilities creates an unstable frontier in Eurasia, where the risk of conflict due to Russian miscalculation is growing.”

Ultimately, the new NSS doubles down on many of the same basic themes as other previous administration’s strategy document. Indeed, the NSS is perhaps remarkable most notably in how it diverges from President Trump’s campaign rhetoric and his actions while in office.