Trump Is Using Netanyahu's Political Ambitions to His Benefit 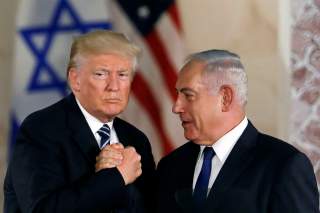 Bibi Netanyahu owed Donald Trump—big time. In late 2017 President Trump had recognized Jerusalem as Israel’s capital and announced that the U.S. embassy would be relocated there from Tel Aviv. Just before the first of Israel’s two 2019 elections, in an attempt to ensure that the Israeli prime minister retained his office, Trump had recognized Israel’s annexation of the Golan Heights.

But Netanyahu wanted more; he had begun to plan the annexation of at least parts of the West Bank. His Washington hit-man, Ambassador Ron Dermer, had sought to lay the groundwork for annexation by lobbying hard to remove any language from the congressional anti-BDS (Boycott, Divestment and Sanctions) resolution that would refer to a two-state solution to the long-standing Israeli-Palestinian conflict. Rebuffed by a normally supportive Congress, Netanyahu could only look to Trump for support and then hope that the docile Republicans on Capitol Hill would go along with the president’s push for an annexation plan.

Netanyahu was therefore in no position to ignore Trump’s demand that Israel reverse its initial position and bar Congresswomen Rashida Tlaib and Ilhan Omar from visiting the Jewish state. Jerusalem was well aware that both congresswomen were virulent opponents of Israel. The Israeli government had initially recognized that in many ways the trip was a set-up: it would create a propaganda opportunity for the two legislators to buttress their case for BDS, whose ultimate objective, as enunciated by extreme opponents of Israel, was to strangle the state economically. Nevertheless, Dermer had indicated that both ladies would be admitted to Israel, despite the country’s legislation that BDS supporters would be barred entry. It was Trump’s demand that the two members of “the Squad” be denied entry that forced Netanyahu’s hand.

Israel’s decision prompted a major outcry, not only from Democrats and from Republican friends of Israel such as Sen. Marco Rubio, but even from normally supportive American Jewish organizations such as AIPAC and the American Jewish Committee. The extent of the  backlash, which clearly caught the Israeli government by surprise, led Netayahu’s close ally Interior Minister Aryeh Deri to reverse Israel’s position once again, and, in response to what appeared to be Tlaib’s  emotional request to see her aged grandmother, perhaps for the last time, agreed to let Tlaib—but only Tlaib—enter the country. In requesting permission to enter, Tlaib promised not to endorse BDS while in the country or advocate for any actions against Israel. It was on the basis of those conditions that Deri agreed to Tlaib’s visit.

It was now Tlaib’s turn to reverse herself. Under what has been described as extreme pressure from pro-Palestinian elements, Tlaib announced that she would not visit Israel after all, claiming that she was being treated “like a criminal.” Deri, who normally tweets in Hebrew, tweeted in English that Tlaib demonstrated that her hatred of Israel outweighed her love for her grandmother.

What should Israel have done in the first place? It was proper for Israel to prevent Omar’s entry.  She is not Palestinian and has no relatives on the West Bank. Additionally, she has exhibited what can only be called anti-Semitic attitudes that go far beyond opposition to Israeli policies. She has challenged the loyalty of Jewish members of Congress. She has employed anti-Semitic tropes and barely apologized for them. And despite having promised Jewish voters in her district prior to her election that she would not support BDS, she announced she would do so as soon as she was elected.

On the other hand, Jerusalem should have welcomed Tlaib, without conditions. It should have done so despite her support of BDS, as well as her ridiculous claim that the Arabs of Mandatory Palestine, who aligned themselves with Hitler and from 1920 onward opposed any plan for Jewish immigration to Palestine even during and after the Holocaust, “sacrificed” themselves to save Jews. Indeed, her visit would have given her a chance to see Palestinian conditions first hand and might have led her to disavow more extreme claims of Israeli “oppression”---unless those conditions are as bad as many Palestinians have asserted. In the latter case, the onus would have been on Israel, not Tlaib.

To ensure that she was given an unbiased impression of the true state of affairs on the West Bank, the government could have insisted that she be escorted not only by left-wing Israeli organizations such as Breaking the Silence, which had been scheduled to guide her, but also by less biased individuals who might rebut any inaccuracies or exaggerations that someone might have fed to her. Even if Tlaib did not moderate her views one iota, the fact that Israel permitted her entry anyway would have underscored its adherence to democratic values.

But Israel did not let Tlaib enter the country. In caving to Trump, Netanyahu has further alienated the Democratic Party, placed Israel’s supporters in an impossible position, and reinforced the arguments of his country’s enemies. Perhaps the Israeli prime minister can now count on Trump’s support for annexation of parts of the West Bank. Perhaps Netanyahu thinks that annexation will enable him to remain prime minister after the upcoming September 17 Israeli election. He may be right; but in the long run, when he is gone from the scene, the price that Israel will have paid for Netanyahu’s ambitions may well be as long lasting as it is exorbitant.