Trump Is Using the Madman Theory in North Korea Policy 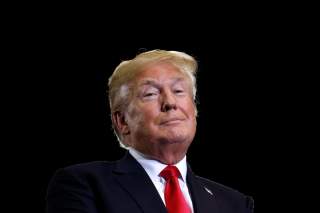 Insofar as Donald Trump is implementing something that legitimately might be seen as a strategy in the cases of North Korea and Iran—as opposed to mere bellicosity, impulsivity, egomania, ignorance and the desire to undo everything accomplished by President Obama—it is possible the strategy could work. That is, North Korea and Iran might fold. Kim Jong-un’s peace offensive, if that’s what it is, no doubt has been at least partly motivated by the fear that if North Korea doesn’t find a way to convince Trump that it is “denuclearizing,” whatever that might mean, Trump might actually start a war that could escalate to the nuclear level.

As well, the Iranian regime, already in deep economic straits and facing growing domestic discontent, might indeed collapse—the real goal of the administration—and be replaced by a more moderate government, which would end its foreign interventions and decline to restart a nuclear-weapons program. Obviously other outcomes are possible, up to and including war with both North Korea and Iran, but it cannot be denied that the Trump administration’s gambles could succeed.

If the strategies do work, then Trump will surely be nominated for the Nobel Peace Prize, as has already been proposed by Republican congressmen and by President Moon Jae-in of South Korea. In light of the history of strange Nobel peace awards, he might even get it—but he would not deserve it.

A review of “the madman theory of the presidency” illustrates why not. In the 1950s prestigious academic nuclear strategists, particularly Thomas Schelling and Herman Kahn, argued that seemingly irrational behavior might make sense in international conflicts: they called this “the rationality of irrationality.” Taking off from Machiavelli’s sixteenth-century suggestion that sometimes it could be “a very wise thing to simulate madness,” strategists argued that national leaders might succeed in their objectives if they convinced adversaries they were so irrational they might start wars that made no sense in terms of rational national interests. As Kahn put it in a 1962 book: you might be able to intimidate an adversary if you deliberately decide “to look a little crazy.”

During the Vietnam War, Richard Nixon—clearly tutored by Henry Kissinger (himself a famous academic nuclear strategist before he became Nixon’s national-security adviser)—became taken with the concept. In his memoirs, H. R. Haldeman Nixon’s chief of staff, quotes Nixon: “I call it the Madman Theory. I want the North Vietnamese to believe I’ve reached the point where I might do anything to stop the war. We’ll just slip the word to them that, for God’s sake, you know Nixon is obsessed about communism. We can’t restrain him when he’s angry—and he has his hand on the nuclear button.”

Though stopping short of going nuclear, Nixon took actions clearly intended to warn the North Vietnamese he would stop at nothing: escalating a war he sought to end, expanding it beyond the borders of Vietnam into Laos and Cambodia and, especially, ordering the heaviest bombing of Hanoi of the war during the 1972 Christmas holidays, just when a negotiated settlement of the war was seemingly at hand.

The Nixon story points to one of several problems with the Madman Theory: if you are only pretending to be insane (for example, by implying but not explicitly threatening to use nuclear weapons), your adversaries—as was evidently the case with North Vietnam—may see through the strategy and ignore irrational threats they don’t believe you will follow through with.

Alternatively, your adversaries may be so fanatical that they’ll ignore threats that they shouldn’t, thus forcing you either to back down or implement your crazy threat. Put differently, other fellow madmen may be even more irrational than you, which points to another flaw in the Madman Theory—and in the nuclear era, possibly a literally fatal flaw.

In some ways, the Madman Theory is the international politics version of Russian Roulette. Nixon evidently thought he was a clever fellow who could defeat his adversaries by pretending to be insane, but the game he was playing was insane—it really is madness to threaten nuclear war for any purpose other than to deter a nuclear attack on yourself.

We now know that Trump is also deliberately playing the Madman Theory card and even more dangerously so than Nixon, for Nixon was a more or less rational man only pretending to be irrational, whereas Trump may actually be irrational. For example, Trump is evidently applying the theory not only to national-security issues with adversaries but even in trade negotiations with allies: last year Trump reportedly ordered the U.S. representative in trade negotiations to tell South Korea that “if they don’t give concessions now, this crazy guy will pull out of the deal.”

Far more dangerously, in both the North Korean and Iranian cases Trump is evidently putting the Madman Theory into practice. So far—so far—he may be getting away with it, and could even end up with the Nobel Prize. The problem is that Trump is playing Russian roulette, not with his life, but our lives. He pulls the trigger twice, and nothing happens—or at least nothing seems to happen—so he thinks he’s winning the game.

The risks of a total loss in the North Korean and Iranian games that Trump is playing could far outweigh any gains, especially since they could well prove to be illusory or ephemeral. For example, in the case of a deal with North Korea, the American government could later discover that Kim Jong-un was not really “denuclearizing,” leading an infuriated Trump to start an irrational war. Similarly, the Iranian regime could survive sanctions, resume developing nuclear weapons, and retaliate by extending rather than curtailing its Middle East interventionism.

Worst of all, a continuation of madman strategies will increase the risks of accidental or even deliberate attacks by nuclear or other weapons of mass destruction on South Korea or the United States. For example, if a deal with North Korea fails to materialize or later breaks down, then Kim Jong-un—or other such adversaries—might believe that they’re in a “use them or lose them” predicament, place their nuclear weapons on a hair-trigger alert, and end by triggering a nuclear catastrophe that no one sought.

In short, the risks of a catastrophic failure of strategies based on the Madman Theory increase each time it is employed, even if successfully so—just as the risks of finally losing at Russian roulette grow after the first two pulls of the trigger.

Jerome Slater is professor emeritus of political science at SUNY/Buffalo and a contributor to the National Interest. In addition to his professional books and journal articles, he has published a number of foreign-policy articles or op-eds for the general reading public, among other places in New Republic, Dissent, Tikkun, Yale Review, Huffington Post, Buffalo News and the Christian Science Monitor.