As Trump Visits the UK, Brexiteers Who Look for Help Will Be Disappointed 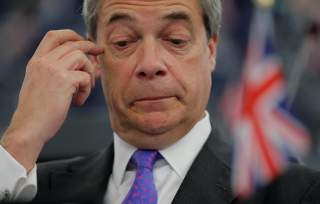 President Donald Trump is toxically unpopular throughout Europe, but nowhere does he pose a greater political problem than in the United Kingdom, where he has arrived today for a long-delayed official visit. Prime Minister Theresa May is facing defections from her government and a potential leadership challenge from radical Brexiteers angry at her decision to seek a somewhat softer form of Brexit. The last thing she needs right now is a visible embrace from the man whom most British voters find unpalatable. Moreover, it is likely that Mr. Trump will use his visit to reinforce a central delusion driving the UK’s separation from the European Union and underpinning the radical Brexiteers’ resistance to Mrs. May’s moderation.

This is the delusion of a “Global Britain” straining to be unshackled from its European Union chains. At the heart of this delusion is a claim that is preposterous on its face—that economic integration with the world’s largest trading bloc, one adjacent to Britain's borders, will be replaced by more natural cooperation with the “Anglosphere” made up of the former Empire, and the Americans. Mrs. May’s government has promoted Global Britain for the past two years, but her attempt last week to maintain some alignment with EU regulations after Brexit suggests she has acknowledged that Britain's economic interests lie more with its neighbors than in illusory trade agreements. Her radical opponents within her party consider this a betrayal.

Despite its illogic, the supposed option of Global Britain has had traction in the Brexit debate in part because it has a long history. Britain as an island state has always had to grapple with problems of scale. Given its size and population, of course, it did enjoy outsized achievements—politically, culturally, technologically and economically. By the mid-nineteenth century, it was the most powerful state in the world, with the world’s largest empire. Yet it was clear that Britain would face larger rivals in Russia, the United States and a newly unified Germany.

As the historian Duncan Bell has described, one solution mooted by various scholars and statesmen was to turn the British Empire into a global super-state, an “Imperial Federation” or a “Greater Britain.” This notion gained many supporters, but never much political backing.

A related idea was to ride on the back of America’s rise, imagining the United States as Britain’s offspring. “Through America,” wrote the British MP Charles Dilke in 1868, “England is speaking to the world.” Cecil Rhodes dreamed of recovering America for the British Empire: his Rhodes Scholarships were intended to foster Anglo-Saxon unity. Many Britons who shared his fantasy of Anglo-American unification or alignment hoped to perpetuate British influence through U.S. power.

By the mid-twentieth century, the illusion of unified “Anglo-Saxons” had taken a knock, not least because Franklin Roosevelt’s post-war aims included the demotion of Britain and the dismantlement of its empire. Still, the half-American Winston Churchill’s promotion of the “English-speaking peoples” and a “special relationship” suggested a continuing belief that Britain could co-opt American power.

There was a problem, however, as even the most Anglophile of American statesmen were coldly realistic about Britain’s position in the post-war world and value to the United States. For instance, U.S. Secretary of State Dean Acheson, whose political difficulties in America included the perception that he was “too British,” was clear-sighted enough to say famously in 1962 that “Great Britain has lost an empire and has not yet found a role. The attempt to play . . . a role apart from Europe, a role based on a ‘special relationship’ with the United States . . . this role is about played out.”

The British government of Harold MacMillan resented Acheson's comments. But Britain went on to take Acheson's advice by joining the European Common Market. The strategic logic of British membership in what would evolve to become the European Union was the whole purpose of Acheson’s wounding words. Five decades later, it was the same strategic logic that led President Obama to warn—in politer terms than Acheson's—that Brexit would diminish rather than enhance Britain's value as an American ally.

That diminishment is already playing out. All serious economic forecasters find that the process of Brexit has reduced UK economic growth since the referendum two years ago, a reduction that will worsen after Britain leaves. The British public is more concerned about adequate funding for the National Health Service than the military services; both, in any event, will be squeezed by lower economic growth.

All of this was predictable, and predicted, before the referendum. What was perhaps harder to predict in June 2016 was the sharp deterioration of a global political order that would be ushered in four months later with the election of President Trump. Trump has posed a challenge above all to the notion that an alliance of “English-speaking peoples” is not a racial concept but rather based on shared common law and love of liberty—difficult to argue when the current U.S. President broadcasts his contempt for the rule of law on a daily basis.

Nor have the supposed practical benefits of Britain’s imagined American option proven viable. Trump promised a “great” trade deal; instead, he has imposed tariffs against European (including British) steel and abrogated the Iran nuclear and Paris climate agreements. The British government, to its credit, has sided with its European partners against these Trumpian breaches.

For those adamant advocates of a sharp break with European structures, such as departing Foreign Secretary Boris Johnson, Trump’s disruptive behavior may resemble an opportunity. Johnson and his Brexiteer allies could delude themselves into believing that, in Trump, they finally have a U.S. president who shares their vision of a revitalized Anglosphere. For instance, Johnson considers himself Churchill’s heir, despite sharing none of his virtues beyond a talent for journalism. Perhaps he also imagines himself as a prime minister benefitting from a Churchillian “special relationship” that saves Britain (and his political career) from the fiasco he has helped to create.

Finally, it is true that Trump shares the eurosceptics’ goal of diminishing the EU. However, this is the sole purpose of any rhetoric he may utter about Britain’s prosperous future if it embraces a hard Brexit. Trump’s treatment of other Western partners foreshadows Britain's lonely future as a middling power seeking influence with a president who disdains allies, understands trade as a zero-sum game and is road-testing the concept of a rogue superpower. When Trump shakes hands with the Prime Minister and sips tea with the Queen, the radical Brexiteers will cling to their delusions, but the British people may be bitterly reminded how much they will miss the EU.

Dana H. Allin is the editor of the journal Survival and senior fellow at the International Institute for Strategic Studies in London. Benjamin Rhode is an Ernest May Fellow in History and Policy at Harvard Kennedy School’s Belfer Center for Science and International Affairs and former colleague with Allin at IISS.