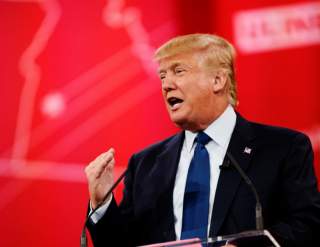 Do intellectuals have a place in politics? Do conservative intellectuals? The latter question has a fresh urgency. Donald Trump has risen to become the Republican Party’s presumptive nominee over the strenuous objections of just about every rightist who’s ever lifted a pen. The intellectuals even had a farcical bid to elevate one of their own to power, proposing that a National Review staff writer run for the highest office in the land. Trump has prevailed while defying nearly every point of orthodox GOP thought: he’s pushed against free trade, against a pacific solution to illegal immigration, against the American alliance system, against entitlement reform, for eminent domain and for the possibility of tax increases. He talks up plans to make the Department of Veterans Affairs great again when most conservatives single it out as a microcosm of why big government and the medical industry don’t mix. Trump has also, at various points, espoused positions that seemed to favor abortion, universal healthcare, and the minimum wage. More broadly, his campaign has resisted the standard, quasi-technocratic methods of campaigning that center on data and careful, systematic message control.

While some of Trump’s redirections imply a growing role for mainstream conservative policy wonks in his campaign in areas like healthcare and taxation, and while one assumes he would not be able to staff his administration without scads of them, he has largely continued to buck the intellectuals’ advice—and their expectations. It is hard to shake the feeling that they are being swept away, brought to heel—that they are unnecessary, that the heart of the movement was always elsewhere. Perhaps, to borrow an idea from Marx, the conservative intelligentsia is a mere superstructure, that the real forces moving conservatism are beneath it, in the conservative masses and constituencies.

Is that really so unthinkable? Have you never read, say, an article in National Review or a report from the movement’s great policy minds and felt for a moment that it merely justified predetermined conclusions? I’ve seen gatherings of these types turn into near shouting matches over tiny policy differences with no tangible impact on ordinary voters. Some of this is a product of how policy expertise is financed: donors, who tend to be motivated by personal enthusiasm about those preexisting conclusions or by some interest in this or that policy outcome. Since donors are a small subset of voters, it’s natural that the acceptable limits of debate in Washington might differ from the acceptable limits of debate in normal contexts. We see this on a number of hot-button issues, such as illegal immigration or Israel, where polling suggests a significant divergence between what ordinary people prefer and what is salonfähig here in DC. Some fields do require deep expertise to understand—we don’t put much stock in the common man’s view about, say, cardiac surgery techniques—but that does not change the fact that democratic politics places legitimacy in the hands of voters, not technocrats, with the view that political questions impact on the polity and the polity thus has a right to weigh in on how to answer them. And, more broadly, experts can diverge from the common view because experts often end up studying or pulling the levers of power, and the workings and reach of those levers end up framing the expert’s world. (We owe such ideas to another one of Hegel’s children.) It shouldn’t be surprising, for example, that the debate on sanctions tends to feature experts on sanctions encouraging more sanctions and sanctions lawyers encouraging fewer sanctions. There are antisanctions sanctions experts and prosanctions sanctions lawyers (well, I’m not sure I’ve met any of the latter), but they tend to be the exception rather than the rule. If an administration needs a specialist to supervise the use of one of its tools, it probably won’t turn to someone who hesitates to even pick the tool up—and it probably won’t be getting many resumes from those folks, anyway.

But there’s something deeper in Trump’s triumph over the experts, something that should be a silver lining for conservative intellectuals as he sweeps them into the ash-heap of history. The conservative intellectual has always been out of place, not because intelligent people cannot be conservative but because conservatism itself is skeptical that the intellectual’s tool—individual reason—is best suited for answering complex political questions. As Thomas Sowell argues in his epochal A Conflict of Visions: Ideological Origins of Political Struggles, the view conservatives generally favor holds that individuals, short of information, limited in experience, prone to prejudice, often err; wisdom manifests in society, which on net has more information and more experience. “The individual is foolish,” said Edmund Burke, “...but the species is wise.” This also explains an old William F. Buckley line: “I am obliged to confess I should sooner live in a society governed by the first two thousand names in the Boston telephone directory than in a society governed by the two thousand faculty members of Harvard University.” Washington conservatives should not be so surprised to learn that conservative voters agree. (Who, by the way, won the Republican primary in Boston?) The conservative intelligentsia is a superstructure, after all, and one built on donations by political enthusiasts of various stripes, not on broader common sentiment.

That tells us little about the merits of Trump himself, but it shows that conservative intellectuals don’t drive conservatism. Yet they had come to think, with their petty fights, with their overemphasis on obtuse questions, with their ever-narrowing orthodoxy and their fear of the odium theologicum, that they did. It was hubris—and they should’ve been the first to see that.