Trump vs. the European Union: The Coming Storm 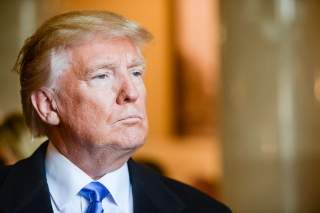 U.S. president Donald Trump pledged to “put America first,” stop other countries from taking “advantage” of the United States, and shake up Washington’s business-as-usual mind-set. This resulted in inconsistent and erratic policy in his administration’s first two weeks. From putting Tehran “on notice,” to signing an executive order banning refugees and immigrants from seven Muslim majority countries, to jeopardizing longstanding U.S. alliances, President Trump continues to undermine EU member states’ security, interests and citizens. The EU must react to mitigate the broader strategic implications of the drastic changes to U.S. policy and check President Trump.

A major component of President Trump’s Middle East policy is ideologically driven opposition to Iran. His team views Tehran as a regime led by “mad mullahs,” driven by an Islamist revolutionary ideology and hell-bent on opposing America. The administration blows Iranian capabilities out of proportion and deeply misunderstands its intentions. In Yemen, Trump’s team follows the Saudi line—the Houthis are a puppet of Iran and a threat to the United States—but the reality is more nuanced. And when Iran tested a medium-range missile earlier this month, the Trump administration put Tehran “on notice” and imposed new sanctions on it.

The fear in European capitals is that all this puts the 2015 nuclear deal with Iran at risk. The stronger anti-Iran tone means that de-escalating minor crises becomes more difficult. And there are likely to be challenges to the deal from both sides.

During the campaign, Trump vowed to “tear up” the deal. But the Joint Comprehensive Plan of Action was not just a bilateral U.S.-Iran deal; France, the UK, Germany, China and Russia were also involved. For Europe, the deal removes a key concern: Iran’s nuclear program. It also opens the doors to dialogue with Tehran as a way to overcome other concerns, something Brussels has already begun through its joint EU-Iran High Level political dialogue, which discusses everything from trade deals to human rights. The EU’s High Representative for Foreign Affairs and Security Policy, Federica Mogherini, successfully leveraged the deal to engage not just the moderates but also hard-liners in Tehran on several fronts, including on tough issues like human rights. To be sure, the agreement has flaws, but even skeptics, including U.S. allies in the Gulf and analysts in Washington, have called for Trump to adhere to its terms.

The new administration’s more belligerent tone towards Iran also affects the battle against ISIS in Iraq. While Iran’s role may be worrisome, there is no denying that the United States, the EU, and Iran have overlapping interests in Iraq. Iran is a key stakeholder in the fight against ISIS, and sees combatting ISIS as a foreign- and security-policy priority, to which it has committed substantial resources. The United States and Iran have coordinated on certain efforts, resulting in successful missions. An increasingly belligerent tone makes this type of dialogue and coordination less likely, ultimately jeopardizing the fight against ISIS in Iraq.

President Trump outlined his administration’s focus on countering “radical Islamic terrorism.” As part of this, he signed a controversial executive order, restricting refugees and immigrants from seven Muslim-majority countries: Iran, Iraq, Syria, Libya, Sudan, Somalia and Yemen. President Trump claimed this wasn’t a Muslim ban. But that’s not how it’s seen. While today the ban has been suspended, the damage is done: if Muslims think this was a Muslim ban, that’s all that matters.

Far from helping the West combat ISIS and its ideology—one of Trump’s main foreign-policy goals—the executive order was a gift to terrorists. It’s the perfect recruitment tool even after it was suspended. ISIS hasn’t been able to sell its narrative of the clash of Islam and the West to the broader Muslim world so far, and such action from the White House allows it to do so. The order also helps radicalize disenfranchised Muslims, and undermines moderate Muslims combatting extremist ideologies.

The ban also further undermines the nuclear deal with Iran. Iran is one of the seven countries targeted. The executive order and the changes to the Visa Waiver Program last year sent conflicting messages to investors and businesses hoping to enter the Iranian market after the nuclear deal. Should Iran be unable to reap the benefits of the deal, it’ll have less incentive to stick to its end of the bargain.

But perhaps more significant to Brussels and leaders of European countries is President Trump’s blatant disregard for managing alliances and relationships with allies. Rhetoric towards traditional allies and friends such as Mexico, Australia and even some of the Gulf Arab states, as well as NATO, highlights the president’s contempt for anyone who criticizes the direction the United States is taking. Instead, President Trump is cozying up to Russia’s Vladimir Putin, whose actions have threatened European security.

Trump’s drastic domestic- and foreign-policy changes, and disregard for the traditional functioning of international relations, present the EU and its member states with a dilemma: to stand up to him and his policies, at the risk of alienating an important ally, or to be more passive, allowing him to set a different tone that potentially jeopardizes their own interests.

The answer is clear: the EU must stand up for itself and its interests.

On the nuclear deal with Iran, the EU must ensure its continued implementation. While this means ensuring that Tehran holds up its end of the bargain, it also requires the United States and the EU to respect theirs. The EU must shield the deal as President Obama did, and make sure small crises don’t spiral out of control. This is particularly important in sensitive times, like the upcoming months, where Iranian hard-liners are likely to try to push the envelope and test the nuclear deal through ballistic-missile tests and cyber activities, and when the Trump administration seems eager to escalate with Tehran.

One way to do this is to fill the dialogue gap left by Secretary Kerry’s departure. The EU and its member states must build on Mogherini’s good relationship with Iran to become the go-to partner for dialogue, in times of crisis in particular. It should continue to engage Iran on other fronts, including its support for terrorist groups, broader regional activities and human rights. Brussels must also ensure that Iran benefits from the agreement through economic and trade deals. While this is increasingly difficult, working with other partners in Asia, for example, could help offset the current uncertain environment.

The EU heads of state should continue to condemn Trump’s executive order. It must also assist those trapped in limbo and unable to return to the United States to resume their studies or work should the ban be reinstated. For example, France stated it would double the number of visas issued to Iranians. Brussels must take rapid action to explore resettlement measures and assistance for the refugees already vetted by the U.S. government and prevented from settling in the United States. EU and member-state officials must bring it up at every level of interaction with the Trump administration.

President Trump has shown that he responds best to firmness. The EU must make it clear that it’s not simply a recipient of U.S. favors, but an integral part of America’s national-security architecture and U.S.-led world order, and a key partner. As such, EU officials should be treated as equals. The EU should pressure the Trump administration to adopt and maintain a constant line on NATO and Russia. The lack of consistency jeopardizes the EU and its member states’ security, even if the rhetoric isn’t matched by action. The EU must also push for a tougher Western stance against Russia. The EU and its member states, many of which have committed blood and treasure to stabilizing Afghanistan, must also demand a strategy vis-à-vis the country. President Trump has said little about Afghanistan, and it’s unclear whether he’ll continue his predecessors’ efforts or not.

The EU has both an interest and a moral responsibility to stand up to the Trump administration’s reckless policies and rhetoric. The executive order and position on Iran threaten European security, because they undermine the fight against terrorism by targeting Muslims, as well as imperiling the implementation of a key multilateral agreement. If key allies, including the EU, don’t stand firm in defense of their values and interests, President Trump is likely to push the envelope further. This will undermine Western interests, values and key strategic efforts, and make the EU look weak.

Dina Esfandiary is a MacArthur Fellow at the Centre for Science and Security Studies in the War Studies Department at King’s College London. Dr. Ariane Tabatabai is a Visiting Assistant Professor of Security Studies at the Georgetown University Edmund A. Walsh School of Foreign Service.