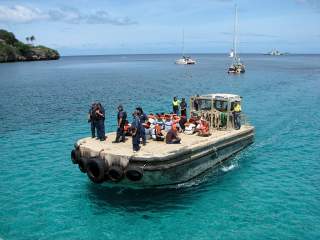 Barack Obama’s last-minute refugee exchange deal with Australia’s Malcolm Turnbull is teetering on the edge. In the action-packed world of the Trump White House, it won’t take much to push it over the edge. As Trump showed throughout the 2016 presidential campaign season, he is not afraid to let things crash and burn. The Australia refugee deal may become the latest casualty of Trump’s thin skin.

Thin skin, or good sense? In their rush to condemn Trump, many on the left seem to have lost touch with their own principles, and maybe their sense of reality. After all, these refugees are being held by Australia, not Syria or Libya. We’re not talking about a generous liberal refugee agreement to rescue people from oppression in the benighted countries of the Middle East. What we’re talking about is fundamentally a prisoner exchange.

Australia has interred 1250 refugees, mostly Iranian, on remote Manus Island and Nauru in severe prison conditions. Reporters and civil society representatives can be jailed for trying to visit the sites or interview the detainees. Australian human-rights advocates that the refugees have been tortured and routinely denounce the bipartisan “stop the boats” policy that put them there.

Meanwhile the refugees that the United States intends to transport to Australia in return are mainly what the Department of Homeland Security calls “Unaccompanied Alien Children from Central America.” Most of them have families in the United States that want to take them in, but are not allowed to. They certainly don’t want to go to Australia.

The Obama administration has kept these children (now mostly young adults) in administrative detention to pressure them to return home. Since it is widely assumed that they will not accept an offer of resettlement in Australia, the recent news coverage of the refugee deal has focused almost exclusively on the Australian side of this one-way bargain.

Put in perspective, with no anti-Trump spin, the dumb deal really does appear to be a dumb deal, and an immoral one to boot. It is essentially a prisoner-swap agreement that does nothing to address the underlying pressures that generated the refugee flows in the first place. It doesn’t even make sense under the narrow logic of Australia’s “stop the boats” policy, since resettlement in the United States is an even greater reward for the refugees than resettlement in Australia.

On top of all this, Barack Obama signed the deal with Australia immediately after the November 8 elections. This was clearly a political move, designed to avoid saddling the Clinton campaign with responsibility for the deal. Obama must have known that Trump would never have signed it himself. And of course Obama would never have been able to get it ratified by the Senate as a treaty, and thus entered into U.S. law.

It is not surprising that Trump might take a dim view of political cooperation with the Turnbull government. Turnbull has done little to hide his disrespect for the new American president. When Trump pulled out of the Trans-Pacific Partnership agreement, Turnbull was the most aggressive of all Pacific leaders in calling for China to replace the United States (a call that seems to have fallen on deaf ears in China itself). And one of the prime minister’s own staff had to be fired for posting obscene comments about Trump on her social media pages.

The global wave of anti-Trump sentiment seems to be even bigger than the 2003 anti-Bush wave. But Trump hasn’t invaded any countries, hasn’t tortured any prisoners, and hasn’t lied to the American people (and the world) about his actions. Given time, maybe he will. But for now the vehemence of anti-Trump sentiment seems to be based mainly on a revulsion against his outsized personality.

Trump may have a way with words. But the Australian refugee deal is a dumb deal, and was a dumb deal from the moment Obama signed it. Hopefully Trump can negotiate a better one. Given that Central American refugees are hardly a major political issue in the United States, it’s clear that Turnbull needs Trump more than Trump needs Turnbull. The sooner Turnbull gets this message, the better—for him, and for Australia’s imprisoned refugees.